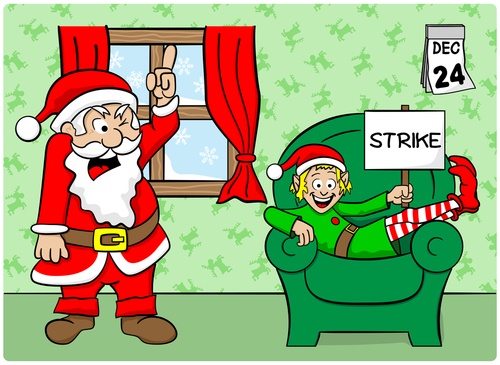 News just in from the North Pole: Santa’s Elves have gone on strike. They don’t want to make any more toys, claiming kids are already spoilt brats. With only 13 weeks until Xmas - parents reaction, hysterical!

Elizabeth Kerr was first on the ground and reported scenes of complete despair at the North Pole. One Elf we managed to speak to said: “Everyone has an interest in boosting Xmas consumerism but its too hard to keep up now. You won't believe what we have to make these days. We used to make real toys, out of real materials that kids treasured for their lifetimes; now we just make plastic junk that kids break and it ends up in landfills,” he said.

Clearly distraught at his current situation he went on to say that last week he received an order for 10,000 plastic birds that tweet like real birds. “Why don’t kids just look out of the window and see the birds in the tree anymore?”

Jingle, Head of Toy Operations, wouldn’t appear on camera but said: “Kids used to have imagination and play with our toys for years, but the advertising is so good nowadays that they already want something new before it’s even June. We just can’t keep up with the demand.”

To speed up production and improve efficiency Santa recently installed production machines that can cut and mould plastic, which is quicker than using more sustainable materials prepared by hand. While this improves the concept-to-dispatch time it takes away valuable Elf jobs, Jingle said. “If parents just toned it down a bit, reduced the amount of toys that kids were allowed, then we would be able to keep up with demand and bring back the quality ‘lifetime of playing guarantee,’” meaning toys are created so well they reduce Xmas consumerism by being passed down to younger generations, he said.

Bauble said that he couldn’t believe the uselessness of some of the toys he was making. “Last week I made five different types of Thomas the Tank Engine railway tracks. This is so that parents have to keep buying more trains if they want to extend their sets. Why don’t they let us make wooden one-size fits all tracks?"

Other toys that Bauble has created for Xmas this year include fake ATM machines for kids to practise withdrawing money they don’t have, an iPotty – a toilet training seat with an iPad holder attached, a plastic McDonalds server complete with plastic burgers and uniform, and battery powered hamsters. “Clearly parents don’t have high aspirations for their kids anymore, and kids don’t know how to use their imagination; even Lego comes with instructions these days,” said Silvie.

Speaking to some parents the response to the strike was nothing short of hysteria. “We are so worried," said one parent. "All year we bribe our kids with the possibility they will get the latest and greatest presents for Xmas in exchange for good behaviour. There are 13 weeks to go – what are we going to do? The more presents under the tree the less guilt I feel about spending so much time at work.”

Another parent said: “If my kids don’t see lots of presents under the tree, then I’m scared they won't like me anymore.”

I asked Jingle: How did things get so bad?

Advertising got stronger and profits needed to be bigger she said.

“We used to make toys that made children think, but these days parents are told that toys which are bright, loud, vibrate, or are designed by a team of neurolinguistic programmers is what will make their child learn and standout from the other kids in school.

"Of course it’s not true, but no one wants cheap moulding clay or a tea set anymore. We’ve been designing toys for generations and we know that the basics don’t change. Toys should be things that encourage the child to use their imagination in a variety of ways, rather than just pressing buttons.

“Grandparents are to blame as well. The traditional book and hanky has been replaced by sacks of expensive plastic figurines, iPads and sugary sweets – no doubt facilitated by the equity in their properties.”

Santa said that come February parents realise that they have wasted there money on useless stuff that the kids don’t want to play with anymore…So then they go and buy more things to keep their kids entertained. "Our Elves never get to have mid-year holiday like we used to. Our factory has to be open 365 &24/7 just to keep up with demand.”.

Do the Elves have a point? Research proves that too many toys can actually have the opposite of parents' intentions and restrict their development.

“They get overwhelmed and over-stimulated and cannot concentrate on any one thing long enough to learn from it so they just shut down. Too many toys means they are not learning to play imaginatively either,” were the results of a US-government funded study.

Elizabeth Kerr will continue to monitor the strike action over the coming months.

But Elves in the meantime are asking parents to take back the control this Xmas by ignoring slick advertising and children’s demands for inappropriate plastic rubbish and instead reduce toy purchasing to just one or two presents each.  A little emphasis on the real biblical meaning of Christmas wouldn’t go astray either, added Santa.

(For a list of entirely inappropriate toys that Elves have made please visit Elizabeth Kerr on Facebook).

Michael Leunig says it so well:

Starring John Key as Santa, the middle class workers as the Elves and Auckland ppty owners as the parents.

I was talking with someone on the weekend who recalled getting their very first bike. It was second hand and came with flat tyres and rust and they treasured it as though it was made from Gold. There were no other presents - just the bike. I wonder how many kids would remember what they got last year alone.

Do the Elves have a point?