The World Gold Council thinks 2018 will be a good one for the yellow metal. It sees four reasons to hold gold 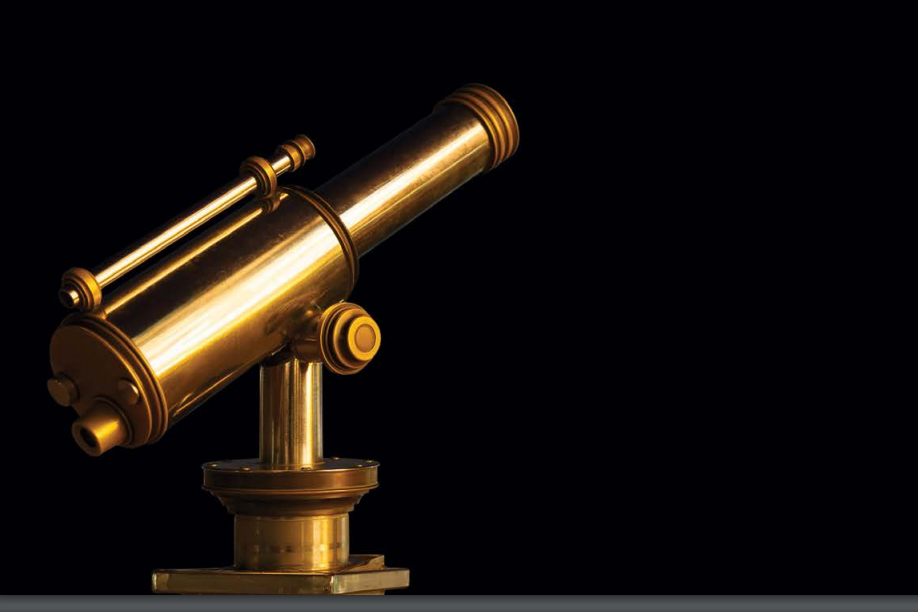 At the same time, monetary policy tightened, pushing up short-term bond yields across the board. The US Federal Reserve (Fed) increased interest rates three times during the year, while the Bank of England (BoE) lifted its benchmark rate for the first time in ten years. The European Central Bank (ECB) declared victory over deflation and signalled that its monetary policy would become less expansionary.

Over the course of the year the gold price rose across many major currencies. The Indian rupee and Chinese yuan gold price rose by 5.1% and 3.5% respectively, while in US dollars the gold price was up 13.5% – its biggest annual gain since 2010 – outperforming all major asset classes other than stocks (Chart 1). We believe four factors supported 2017’s price gains:

• The US dollar weakened, supporting the US dollar gold price.
• Many assets, including major stock indices, made new highs. As price/earnings ratios increased and valuations became expensive, we believe many investors grew nervous of a potential pullback, adding gold to their portfolios to manage risk exposure.
• Despite historically low volatility across most asset classes, geopolitical instability heightened investor uncertainty and fuelled some flows into gold.
• Gold’s positive price momentum, in our view, reassured investors that its price trajectory was well supported. 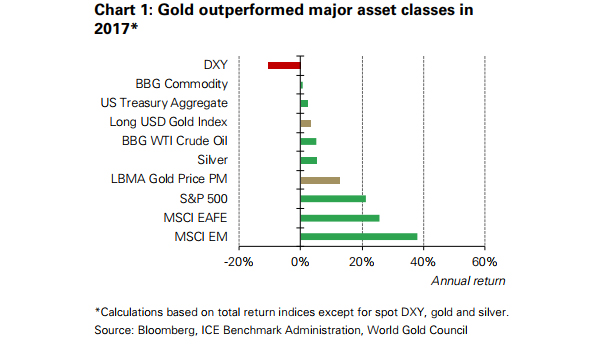 Gold’s performance in 2017 was not an anomaly. It has provided competitive returns over the long run, growing by 10% on average since 1971 – following the collapse of Bretton Woods and the end of the Gold Standard. It has also performed well compared to major stock indices over the past two decades (Chart 2). 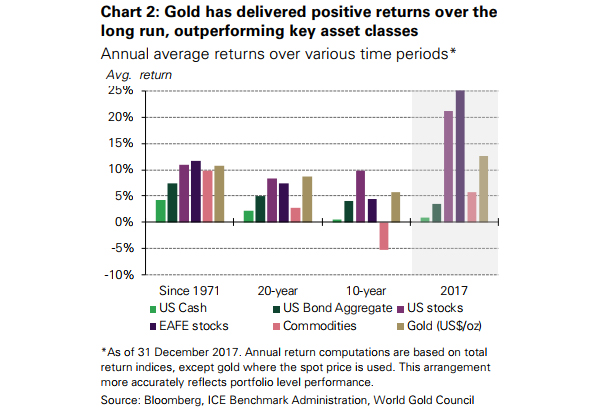 As we enter 2018, we identify four key themes that we expect will drive global financial markets and influence gold’s performance.

1. A year of synchronised global economic growth
Ten years after the financial crisis the world is returning to economic normality. Global growth increased in 2017 and the market expects the trend to continue in 2018.

The European and US economies have expanded, and unemployment has fallen in recent years. Wages are rising yet inflation indices are low. Households and businesses are rebuilding their finances and are optimistic about the future.

We expect that China’s economy – home to the world’s largest gold market – will continue to grow, but the nature of growth is changing: its long-awaited transition from investment-driven growth to a consumption-led model is underway. This could affect the economic growth rate, but even if the Chinese economy grows at a slower rate than in the past, we see a more balanced model – aided by further global integration through its One Belt One Road initiative – as supporting a sustainable growth trajectory.

In India – the second largest gold market in the world – we believe that after their initial implementation shock, policies such as the demonetisation initiative and the new Goods and Service Tax (GST) will start to have a positive effect on the economy. These policies are designed to improve transparency, broaden the tax base, and draw the informal, cash-based economy into the formal sector.

For example, between Q1 and Q3 2017,5 China’s consumer demand increased 12%, US jewellery demand hit a seven-year high, and technology demand was on course to record its first year of growth since 2010. Our econometric analysis demonstrates that positive income growth has a significant effect on gold consumer demand (Chart 3).

Increased consumer demand supports the investment case for gold and highlights its dual nature. Investors often focus on gold’s effectiveness as a hedge against financial shocks. But rising wealth underpins gold consumer demand, which, in turn, supports gold prices over the longrun. The interaction between investment and consumption also results in gold’s lower correlation to other mainstream financial assets, making it an effective diversifier.

Chart 3: There's a positive relationship between gold demand and wealth
(a) YoY change in jewellery demand as function price versus world GDP growth*

Continued global economic expansion will likely result in tighter monetary policy. The Fed will take the lead as it seeks to shrink its swollen balance sheet – it plans to let US$50bn of treasuries and mortgage-backed securities mature each month, and it is anticipated that by 2020 its balance sheet will decrease to around US$2.5tn, having been at US$4.5tn since 2014. The Fed is also expected to raise rates further. Its ‘dot plot’ has three rate hikes pencilled in for 2018. The market is pricing in at least two hikes and a small chance of a third.

But while higher rates increase the opportunity cost of investing in gold, we believe the implications for gold are more nuanced.

The actions that central banks took over the past decade have had substantial implications for the performance of financial markets. As they pumped trillions of dollars, pounds, euros and yen into the global economy and slashed interest rates to – and in some cases below – zero, asset values hit record highs, market volatility reached record lows and prices became increasingly correlated.

It is reasonable to presume that as central banks rein in their expansionary policies, these trends will reverse. Government bonds – the chief beneficiaries of quantitative easing – may come under pressure and their multi-decade high returns decrease. Financial market volatility may pick up and idiosyncratic risk may re-emerge.

And while interest rates are poised to increase, we believe that the overall level of rates will remain low from a historical perspective. Developed market debt remains stubbornly high and emerging market debt has further increased.6 This should make governments, corporates and households more sensitive to changes in interest rates than during periods of lower debt levels.

In our view, the potential headwinds to gold may not be as strong as some think. Gold can help investors manage financial market risks. Our analysis of gold’s performance during different US real-rate environments reveals that when real rates are between 0% and 4% gold’s returns are positive, and its volatility and correlation with other mainstream financial assets are below long-run averages. These attributes can have a positive effect on portfolio performance (Table 1).

Asset prices hit multi-year highs around the world in 2017. In the US, the S&P 500 is at an all-time high and its cyclically adjusted price earnings ratio (CAPE) is at its highest level since the peak of the dot-com bubble in 2000.

In addition, investors have been forced to take on additional risk to generate additional returns. In the credit markets, they have increased their exposure to lower quality companies. According to the St Louis Fed, the spread between BAA rated corporate bonds and 10-year US treasuries is the lowest since 2007, while the Chicago Fed has noted that credit conditions are at their loosest levels since 1994. Investors’ hunt for yield has fuelled rampant asset price growth elsewhere: in China, for example, property prices almost doubled in the period January 2015 to October 2017.

This bull market may continue throughout 2018. Analysts and commentators have been ringing the warning bell for some time, but equity markets have marched steadily higher and credit standards have slipped lower. Many investors, however, are understandably wary of these asset valuations and, in the context of changing central bank policy, cautious about their risk exposure. In China, for example, regulators have emphasised their efforts to curb financial risk and restrict leverage, and have intervened to cool the property market.

Should global financial markets correct, investors could benefit from having an exposure to gold as it has historically reduced losses during periods of financial distress (Chart 4) 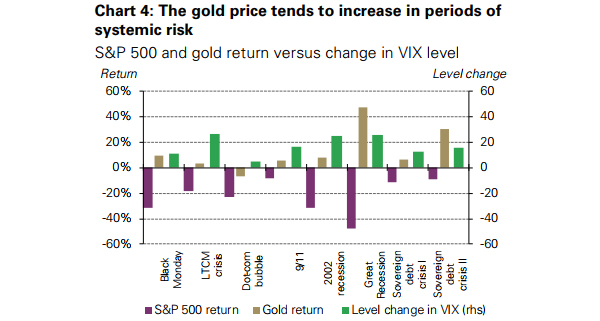 Over the past decade, financial markets have become more transparent and efficient, with new products broadening access to investors of all shapes and sizes.

The gold market is no exception and over the past few years it has made great strides in terms of transparency. The London over-the-counter market – historically opaque – witnessed two key developments in 2017. The London Bullion Market Association launched a trade-data reporting initiative, which could bear fruit in 2018.8 And the London Metal Exchange launched LMEprecious, a suite of exchange-traded contracts intended to improve price transparency and efficiency of transacting in the London wholesale market.

Plans are afoot to develop an exchange in India too. The world’s second largest gold market may also be one of the most complicated and fragmented. This creates challenges in quality assurance, price discovery and market liquidity. But momentum is building within the industry to develop and launch a national spot exchange and the government is introducing mandatory jewellery hallmarking which is intended to rid the country of under-carating incidents. We see such initiatives as helping to create a more efficient gold market and ensure that customers are well served by the gold industry.

Elsewhere, there are signs of progress in reducing barriers to investing in gold. Currently, Russia’s tax rules virtually prohibit gold investment. Individual and institutional purchases of gold bars are subject to value added tax (VAT) of 18% – the highest rate in the world. This may change in 2018. A draft amendment to the tax code proposing an exemption for gold has been submitted for consideration by the Russian government. If approved, it may herald the development of a new gold investment market.

And gold-backed investment vehicles around the world are making it easier and cheaper to access gold.

We believe that the confluence of the key trends we’ve highlighted for 2018 could be supportive of gold demand. And over the long run, there are also four attributes that make gold attractive as a strategic investment:

• It has been a source of return for investors’ portfolios
• Its correlation to major asset classes has been low in both expansionary and recessionary periods
• It is a mainstream asset that is as liquid as other financial securities
• It has historically improved portfolio risk-adjusted returns.

This article was first published here.

Our free weekly precious metails email brings you weekly news of interest to precious metals investors, plus a comprehensive list of gold and silver buy and sell prices.

To subscribe to our weekly precious metails email, enter your email address here. It's free.