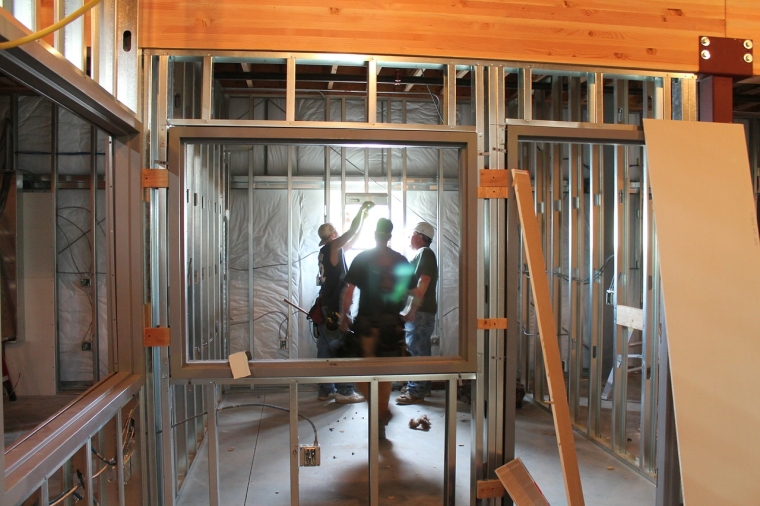 The latest building consent figures suggest the residential construction market will remain at capacity for the next two years.

There were a record 44,299 new dwellings consented in the 12 months to the end of June, according to Statistics NZ.

The total value of new dwellings consented in the year to June was $16.58 billion, up 20.4% compared to the previous 12 months.

On top of that another $2.18 billion of structural alteration work was consented for existing dwellings, taking the total value of residential construction work consented in the 12 months to June to $18.76 billion, up 19.7% compared to the previous 12 months.

Auckland continues to be the main driver of residential building activity, with consents issued for 19,036 new dwellings in the region in the 12 months to June, up 28.8% compared to the previous 12 months, with the number of new dwelling consents issued increasing for four consecutive months.

Stand alone houses continue to be the most common type of new home being built in this country, with 24,522 consents issued in the year to June, accounting for 55% of all new dwelling consents.

However low rise multi-unit dwellings such as townhouses and home units are showing the greatest growth, with 13,529 of them consented in the year to June, up a whopping 44% compared to the previous 12 months.

There were also 4165 apartments consented in the year to June, up 5.8% on the previous 12 months.

The one part of the housing market not showing any growth is retirement village units, with 2083 of them consented in the year to June, down 3.7% on the previous 12 months.

That was the second year in a row that the number of retirement village units being consented has declined.

The interactive charts below show the trend in new residential dwelling consents issued in all regions.

Nothing like a blind-spot sneaking in and chipping away at the benefits of increasing number of consents.

Finally this govt. quintuple (5 times) the homelessness in NZ, great job way ahead to go, make it 10 times till you end your tenure.....

Over supply here we come.

The bear has appeared in the window with flattening house price growth as reported by QV and REINZ last 2 months. Once the growth from last summer drops off the 12 moth rolling average, the media will start freaking out. Animal spirits will change their opinion of the market. Highly leveraged will become financially stressed with interest rates rising. More supply and less demand happens simultaneously. And then bear will jump. Everything is lining up.

If you plan to sell, be quick.

Sadly no. Unless interest rates rise they will all simply be gobbled up. By the time we have any form of surplus the boarders will reopen. The house price graph looks like a pretty picture of Everest, its still not at the top and just pausing for a breath. The RBNZ needs to suck the rest of the air out and quickly if it wants to stop the final summit to the peak this summer.

So are you saying this summer will be a bull trap? The government has already said that immigration won't go back to previous levels, our economy seems to be doing quite well with borders shut.

Personally I think this summer will see an increase in listings but with lower demand, and so prices will start their decent in earnest. Slowly of course, since real estate markets are inefficient and prices are sticky on the way down.

Maybe I am just thinking wishfully as a disenfranchised, jealous, seething millennial. But I do work in financial risk, so my thoughts are from an educated perspective. We will see.

I think you'd be right in a rational world, but the NZ public (and by extension their institutions) are not rational.
The assumption of capital gains is so deeply embedded that people won't sell for a discount unless they are forced to. If we see *any* rise in interest rates (debatable), it won't be enough to force sales -- just make holders a little less comfortable. I honestly think 'Mum & Dad' would rather lose money on a property for years and years than admit they've made a poor investment. And that, en masse, is enough to prop up prices.
And I still believe we're more likely to see interest rates down than up. We know the RB is biased toward dropping rates the moment any bad news comes out. Another small Covid outbreak would be enough to preclude any rate rises for another two years while the RB 'wait and see' what happens...

Agreed. Shortly after the borders open, we will see influx numbers go back to historical highs; this time those sectors wanting to bring workers in droves will still be able to do so through the tertiary education channel.

Also, NZ National will undoubtedly reverse all migration policy changes the very day they get back into power.

Even if you wanted to sell the government’s phasing in of the tax deductibility rules for existing investment property together with the application of those same rules immediately for newly purchased property means that rationally you should hold your property for the 5 years it takes to fully realise the tax deductibility of interest prior to it going away (This benefit is not realisable by any new owner and as such does not get priced in).
Combine this with the notion that time in the market beats timing the market as well as the 5 year bright line test that might apply and the prospect of a national government within the next 5 years that might reverse the changes and you have a revenue for “Wait and see”.

Does anyone know how many houses need to be built to fulfil the shortfall? If not, when will we know enough has been built? What's the time delay on realizing we've nailed the shortfall, and how quickly can the market react by scaling down?

Also, how many are being snapped up by investors to rent to prospective FHB, which is doubling down on the demand side where the underlying need for shelter is a lot less? How many properties "borrowed" from the pool to be left empty or for Air BNB may eventually be gifted back to the market?

I am afraid too much effort has gone into tilting the gold rush towards new supply for fiscal and monetary authorities to allow there to be some sort of a surplus-induced slowdown.
I reckon intervention might come to keep this sector alive if need be. On a positive note, bringing new supply into the market creates well-paying skilled jobs.

I don't think oversupply is a risk. So long as there's a Labour gov't in power, they'll be willing to buy up any excess to add to social housing stock. Puts a floor on prices for years to come, I think.

Good point, they already thave the policy in place for this. Some developers might be handed an easy out.

You think the govt will keep buying houses after it runs out of clients to put in them? Why?

They need a huge amount of houses before that happens

Good point, I hear it is happening a fair bit

NZdan: A 2018 report “A Stocktake of New Zealand’s Housing” put the under supply in Auckland at 28,000 homes, but said it could be as high as 45,000.
Statistics NZ data show that roughly 100,000 dwellings were consented in Auckland from 2013. However, a report by Bill Mitchell for Auckland Council found that the number of households in Auckland increased by only about 27,000 between 2013-2018 (mainly due to internal migration and also to increased household size). So, it would appear any housing shortage in Auckland is rapidly decreasing and oversupply could become a real risk. I would like to see some more expert analysis than mine of this type of data. Links to the reports are here:
(Stocktake: https://www.beehive.govt.nz/sites/default/files/2018-02/A%20Stocktake%2…. Bill Mitchell report: https://knowledgeauckland.org.nz/media/1805/intermediate-housing-market…)

Thanks for that. I've very interested in more research around this as well. It seems like with low net migration right now, high levels of building, and extremely high prices, it's reasonable to think that the market could be a due for a correction in the future. But it's hard to really know. I think the first sign would be rental vacancies rising, once that happens the picture changes quickly, but there isn't any sign of that yet.

There are some signs that there is an emerging problem for landlords eg more “for rent” signs appearing on properties, at least in the suburbs I watch (around BeachHaven, Birkdale etc). Also a recent report mentioned landlords finding it harder to rent properties on the North Shore, prob due to the astronomical rental prices here. There is some indication (eg TradeMe rental data) that rents in Auckland are stagnating, although other data series shows some rental price growth still.

This is good.. We need more and more houses so that it becomes affordable.
And we do need new houses in the country. There are far too many old, desolate and run down houses.
We need better houses with better building materials and construction practices

Can I ask, have you ever had a house built? It's not possible to build "affordable" houses in NZ.

Build expensive houses then crash the resale price to make them affordable?

What would happen if the banks enacted a DTI of 3 overnight and over the coming weeks/months new house sales fell off a cliff?

And there you have just another reason that houses will not get cheaper. We built absolute crap monoclad houses for over a decade, probably 2 decades that have a life expectancy of 20 years instead of 50 years that should all have had a wrecking ball put through them by now. Basically houses in NZ will never get "Cheaper" until substantially more people start leaving NZ instead of arriving and ALL the buyers dry up.

All well and good, now all we need is the tradesman, labour and materials to bring this to fruition. IE, the hard bit.

Most developers are resorting to cookie-cutter townhouses i.e. building multiple homes of the same design on one piece of land and replicating that in another part of the city or country.
The efficiency premium from a central body granting a single, overarching approval for these suppliers to build individual components in a controlled factory environment and simply assemble these on-site would be incredible for the sector.

And let's not forget that some fraction of new consenting involves subtraction of some existing mouldy shacks perfectly acceptable rentals.