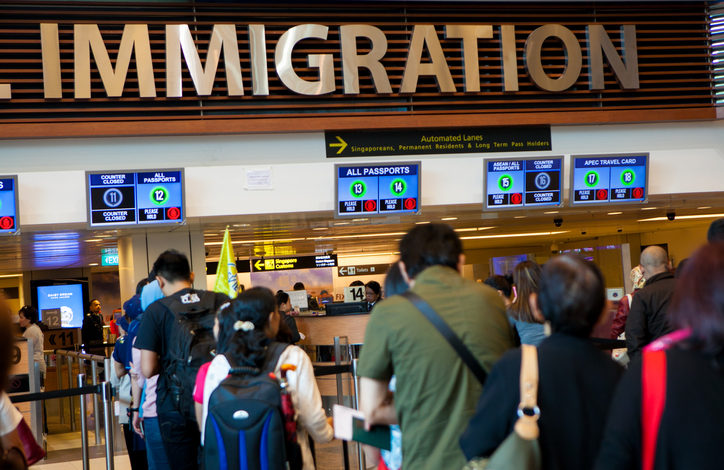 There was a big jump in population growth from migration in July, according to Statistics New Zealand.

The latest migration figures show a net gain (long term arrivals minus long term departures) of 1139 people in July, more than double the net gain of 527 in June and almost 15 times the net gain of 76 in July last year.

July was the fifth consecutive month that the net migration gain increased.

The main driver of the increases has been a steady reduction in the number of people leaving NZ long term, while the number arriving long term has been relatively stable.

Long term arrivals have declined marginally from 3324 in February to 3302 in July, while long term departures declined from 3659 to 2163 over the same period.

The latest figures are just a shadow of what they were two years ago before border restrictions were imposed.

Of the 3302 long term arrivals in July this year, 1995 were New Zealand citizens, 375 were Australian citizens and 932 were citizens of other countries.

Of the 2163 long term departures in July, 949 were NZ citizens, 121 were Australian citizens and 1093 were citizens of other countries.

The biggest declines in the numbers of people arriving long term have been for those arriving on student or work visas.

That appears to have debunked the theory that was widely circulated when the country first went into lockdown in March last year, that returning New Zealanders would make up for the decline in foreign workers and overseas students and prop up the net migration figures. 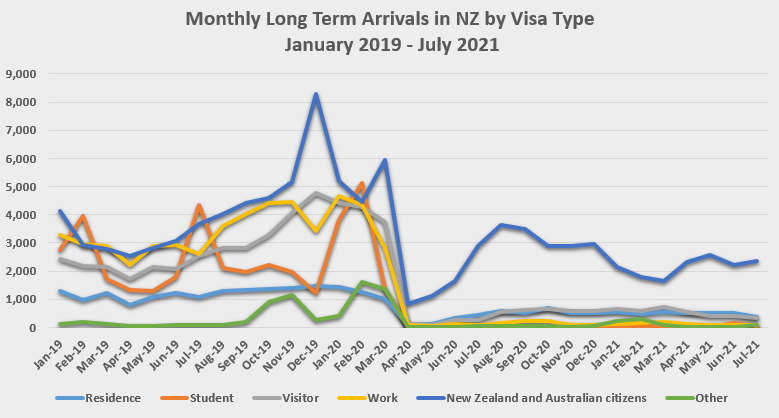 Little can be deduced from one month's figures at the best of times and this is not the best of times. Still waiting for INZ to raise its game and our govt to produce an actual population plan rather than just give in to whichever lobby shouts loudest.

There is never going to be a "population plan", in the sense of enough.. Cramming as many as will come is the plan. I didn't vote for this and never will.

Think you'll be running out of parties to vote for. Can't think of any. It verges from opening the tap full bore to a quarter on. None have a trickle which will always be needed. Forget what they say before the elections, particularly Winston first, they just won't implement anything and leave INZ to issue as many as they can.

Why not copy Denmark and just be very fussy; note they are wealthier than us.

Yeah, Winnie was a cynical bugger. Knew which buttons to push to get him over the line, but once over the line, roared like a mouse. I think my voting days are over. I'm done giving my vote to the least bad and thereby endorsing policies that make me physically ill!

You are not alone on that one

In addition, The Govt has approved NZ Universities, Polytechs, PTEs etc to run thousands of international students on online courses while remaining offshore.  These online students are likely to have favoured status for onshore visa approval in future if ever the border semi-opens up again.

Covid has done us a favour to allow time to pause & reset. Was just madness during Key & this current lot. Lets hope they get it right when the boarders open.

Our mad immigration policies will continue as before.

Waiting for someone to ask whether we will be returning to previous migration levels and can it be justified given the huge problems with infrastructure development and maintenance. Anyone at all.

Good luck with that!

That's why I'm not getting a jab. It's my way of giving the finger to the indecent haste of a return to the extinction event.

Labour were even worse than National for flooding the country with unsustainable immigration.

Don't have enough fingers and toes to count the election lies from Lie-bour.

Ask an immigrant who is waiting for PR and even better, one of the thousands who cannot get an MIQ spot.

The wuhan virus has provided a brief respite.

More than most countries NZ can absorb migrants. I would greatly prefer a declining population but can't deny NZ can continue to lead the world with its highest long-term legal immigration. Of course if that is the govt's intention then they would be training more nurses, doctors, teachers, etc and building more infrastructure.  NZ is bigger than the UK with a tenth of the population so high immigration is theoretically sustainable.

The biggest problem with immigration is the volume of low paid immigrants.  Basic economics - increase supply and prices go down so importing cheap labour keeps our wages low. It is logical that our wealthy elite wants cheap services but how the Labour party justifies it I don't know.

Can you provide some statistics to back this assertion?

Sure.  Take your mouse.  Scroll up.  Then pay attention to the chart at the bottom of the article.  Lie-bour have been in office since mid-late 2017.

Elected on false promises to deal with housing and excessive immigration, they instead doubled down and turned National's crisis into an absolute catastrophie.

The last four years have demonstrated who she really is and the credibility of anything that comes out of her mouth.

Oh God.  Here we go again.  The Government stoking the population driven property ponzie.  They need to get their priorities straight, sort out housing for our own citizens and stop turfing them out onto the street to house people from over seas.

Take solace in a key point the article makes - the net migration increase is driven by fewer leaving, not more arriving long term.

But I think the stoking will start soon - there is too much money at stake for those at the top to avoid the temptation.

How the country is going to use this Brain Gain of returning Kiwis with education, experience and enthusiasm ? Has the Government got any special pathways for them to contribute by their enterprise here ?

* pretends an aging population isn't something to be concerned about*

Yeah, damn migrants, taking all the jobs we don't want.

It is a worry when people are worried about people from other countries that come here with English as a second language and don’t know anyone taking jobs off people that have lived here their entire lives.