The number of people in New Zealand on work or student visas continues declining, but the rate of decline is relatively slow

Property
The number of people in New Zealand on work or student visas continues declining, but the rate of decline is relatively slow 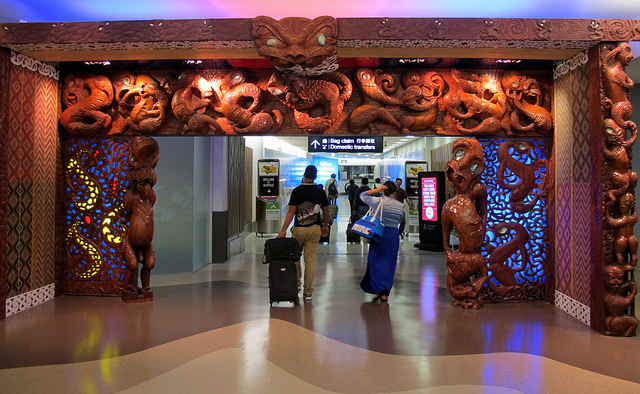 The number of people in New Zealand on work or student visas is continuing to decline as border restrictions remain in place, but the rate of decline is relatively slow.

According to the latest data from the Ministry of Business Innovation and Employment, there were 49,191 people in NZ on student visas at the end of August.

The August numbers were the lowest they have been in any month of the year since January 2014, which was the last time they dipped below 50,000.

Overseas worker numbers are also in slow but steady decline, with 180,069 people on work visas at the end of August.

The number of people in the country on work visas is at its lowest level since December 2018.

The latest figures also show very few people are currently entering NZ on work or student visas due to border restrictions, while most of those who were already here when the restrictions were put in place, are staying put.

That is leading to a slow decline in numbers rather than a dramatic decrease.

In August just 471 people entered NZ on work visas and 165 on student visas.

Altogether there were 229,260 people in NZ on work or student visas at the end of August, down by 73,974 (-24%) compared to February last year before comprehensive border restrictions were introduced. 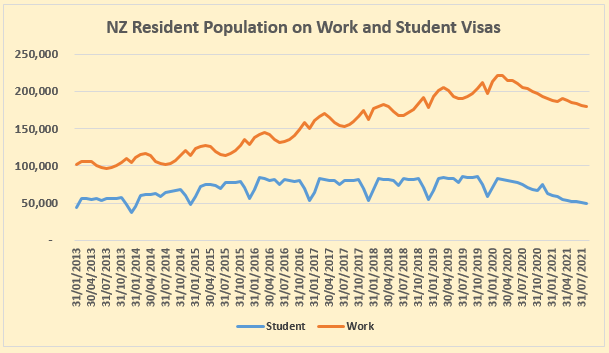 There are 2.7m people working in NZ.  Roughly 8% are these non-permanent foreigners.  Then add an accumulating 1.5% gaining permanent residency every year.

They keep NZ interesting but a more boring NZ may be preferable.  Those low status jobs Kiwis are unwilling to take (care workers for example) would have their wages raised. What is wrong with a shift working care giver earning more than a council pen-pusher?

Immigration and population planning ought to be discussed by serious politicans.

Most New Zealanders are ignorant of human overshoot in a finite biosphere and this includes our politicians.

When was the last time there were 5+ million rapacious primates living off finite stocks of imported oil living in this land?

It is an uncontrolled experiment that will end badly.

Plenty of Kiwis out there still buy into the promise of mass migration transforming our society into some sort of a 'melting pot'.

A drive into the heart of Mangere and Papatoetoe should be enough to burst that utopic pipe-dream sold to us by Labour-National.

Plenty of Kiwis want a docile lower working class to provide cheap fast food and care givers for our geriatrics.   'Fair go' NZ with its protestant ethic that all humans beings are equal in the eye of God is on its way out. An aristocratic elite needs its serfs.

If Protestants believe in all human beings are equal in the eye of God, why such disparities between Maori and Pakeha?

It would make an interesting article but waste of time writng now because we have so few practising protestants. But it was a protestant religious ethic that made the modern world for good and bad.  Look at the treaty of Waitangi as an example - prior to that the general attitude was 'we conquered so we own' as per the American constitution and their indigenous population. That was roughly the historic point when anti-slavery became a powerful movement - prior to that slavery / serfdom was commonplace in all civilisations.

There are many more primates living in Manila, New York, Jakarta, Shanghai, Mexico City.  Java is less than half the size of NZ with a population of 145 million. So we could take more but why?  I could increase the population in my house but choose not to do so.  Something to do with wellbeing.  NZ should be setting an example with both climate change and with a planned population reduction.  They are closely related.

My friend Harald is a Swiss-born American. He is a designer in various fields of engineering. His French-Canadian wife has U.S. citizenship. She is a professor of political studies and in 2019 accepted a position at a university in New Zealand. Harald was okay with this as he loves to travel, and because an increasingly large part of his work is done online.

"Have fun talking about nothing but houses from now on" I said when he told me the news. He laughed.

Today I spoke with Harald via FaceTime.

"Dear god, we have to get out of this place! If I hear one more conversation about dream homes I will go mad!"

Apparently all conversation among even the best educated of Kiwi academics eventually devolves into blather about nothing but huzzuz unn thuh 'Murrucuh's Cupp. Who'd have guessed it?

The truth should hurt, but Kiwis think blathering about almost nothing other than huzzuz unn thuh 'Murrucuh's Cupp uzz ussumm!

Still, I guess there's always cars and rugby too. Excuse me... that should be "cuzz unn rugbuh tuh".