First home buyers borrowed an average of $548,000 during September 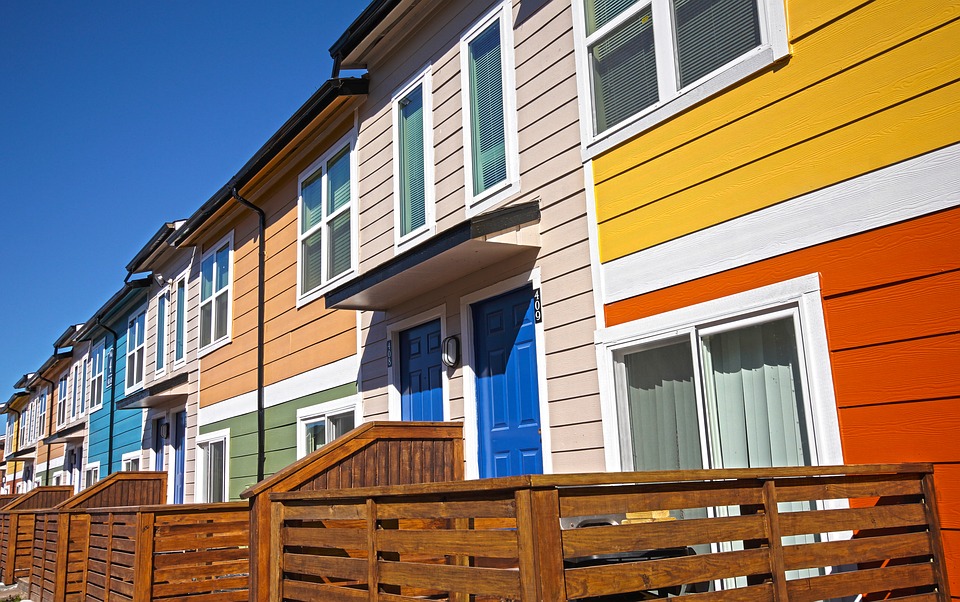 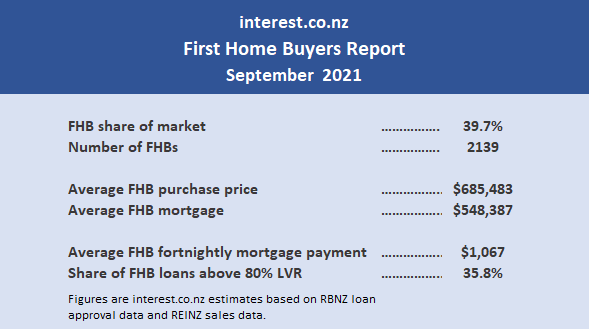 First home buyers were less active in the housing market in September, with all of the indicators used by interest.co.nz to measure first home buyer activity recording declines in September compared to August.

According to the Reserve Bank, mortgages were approved for 2139 first home buyers in September, down 14.3% from August.

That would have given them a 39.7% share of sales recorded by the Real Estate Institute of New Zealand in September, down from August's 43.4% share.

However they are still achieving a relatively high market share, which up until May 2017 had been below 30%.

The average amount borrowed by first home buyers also dropped back very slightly from the record $557,068 in August to $548,387 in September, but this was still the third highest average loan amount ever for first home buyers.

There appears to have been two main drivers of the lower level of first home buyer activity in September; an overall drop in activity in the housing market, and the banks tightening up on the availability of low equity loans.

The REINZ recorded a 6.3% decline in residential sales in September compared to August, which is likely to have affected all segments of the market.

However more than a third (35.8%) of first home buyers in September purchased their home with a deposit of less than 20%, down from 37% in August.

Interest.co.nz estimates the average price paid by first home buyers for a home was $685,483 in September, which would give fortnightly mortgage payments of $1067 (at 3.02% interest, which was the average of the two year fixed rates offered by the major banks in September, with a 30 year term).

FHB have had their last chance now that rates are on the rise. Its a double whammy, house prices will continue to increase in the short term and now interest rates are set to rise as well.

If there's less buyers/demand, won't prices have to adjust?

That's the fallacy.  People think as interest rates rise, prices will fall.  Unless the interest rates rise significantly (which means +6% or more), it will have very little impact to price since banks have already taken these risk assessment into place.  The issue is, they won't raise it that high because if they do, they risk mortgage defaults and a depressed economy because people can't spend as much (or feel rich anymore).  That would cause another big issue down the line (i.e. Lehman Brothers 2.0).

Also, majority of those who control the housing market, already outright purchased it and don't carry any mortgages (cash purchase).  They own multiple properties and are a long term investor.  No long term investor would sell out.  If they did sell out, where would they put their money?  A risky stock market?  A 3% bank term deposit?  There is nothing else to do with the money (esp during COVID times), so they just use that money to buy another house asset.

The Kiwi dream has always been to own a house.  That won't change.  In these uncertain times, people tend to want to a sense of security (i.e. owning a home to live in).  There is nothing else to do.  You can't travel freely because it isn't safe/restrictions.  How much luxury items can one person buy online?

So the conclusion is, there is nowhere else to put your hard earned money.  So why not reinvest it into 'appreciating' secure assets like a house?  Unless of course you prefer the safety of 3% bank term deposits.  Everyone has their choice.

I agree with much of what you have written, it would take quite a large OCR increase to crash prices.

But it won't take a large OCR increase to crash the residential development sector, which has become quite reliant on FHB's, who are much more sensitive to rising interest rates.

I reckon if the OCR goes above 1.5% it will really hit that sector, especially with its massively rising construction costs. The perfect storm?

That is nice and all, but crashing residential development won't happen especially when we also have a housing supply crisis in NZ (and on top of that, we have a global supply chain issues of shortage of material & labor).

Someone and something has to give.  Not everyone can be winners.  I guess the question is, who will be the loser?  I don't think it will be home owners as that would cause more headaches for the government to deal with (and we already know they are scrambling to deal with the current crisis at hand).

What is the lesser of two evils?

Just do the sums. I have.

Do you still think 'Realisable' demand for new build housing will be buoyant?

Not to detract from your argument, but those mortgage rates are optimistic.

No probs, I was working off one year fixed rate  assumptions.

I am  very open to people challenging my contention that the residential development sector is going to crash or else slump.

That's my viewpoint right now, but a good argument might change my view.

Yeah but I was talking about less demand for housing and the impact it would have on house prices... Nothing about interest rates.

Do people think there is really less demand for housing?  All people talk about is the lack of supply and the fact that global supply chains are creating material/labour shortages globally, that only makes the situation even worse.

People view houses as a necessity and as a creation of wealth.  Until those two things are not priority anymore, there will never be "less demand" for housing.  At least not enough to "crash the market".

You need to read more about 'demand'. There is underlying demand, and realisable demand.

Lots of prospective FHBs want to buy a first home. That is underlying demand. However, only a portion of them can do so, because of unaffordability. That portion or subset who can do so represent 'realisable' demand.

That realisable demand is starting to shrink rapidly, because of huge increases in construction costs and rising interest rates. These factors will kill the residential construction sector.

Exactly... and If FOMO goes, what happens...

Wishful thinking, combined with a too big to fail mentality.  A change in the weather is coming.

All that really matters is how much credit banks are willing to extend to buyers.  If that supply of credit is curtailed then prices will respond accordingly.

Just as more credit was extended when interest rates dropped, less credit will be extended as interest rates increase.  In addition there are new LVR rules coming in, debt to income ratios, steep mortgage rate increases coming while people's disposable incomes are being squeezed by the spineless inaction of central bankers on inflation.

The recent mania has been entirely caused by a reckless oversupply of credit.

The housing has zero risk mentality is a dangerous falsehood.  Shares and even crypto are both less risky than a 80% leveraged play at peak housing bubble stupidity.  As for "covid times", they are close to over.  Travel is months away and many people are reaching the conclusion that rip-off nanny-state New Zealand is a fairly rubbish place to be these days.

Brilliant - and oh so true... There is much pain coming which is inevitable following such a massive bubble.

Agree. Capital gain is the driving force here and is still growing at rapid speed.

Apparently, BNZ is introducing DTIs for all borrowers, and expect other banks to follow. This is a game changer for FHBers

Depending on what is set, this has the ability to shut the doors on the FHB and numbers will go off a cliff. Banks must be starting to worry a little that they have stress tested all their existing customers at a high enough level. I don't see 6% rates being a huge problem but anything above that could go exponential very quickly. 8% rates would see total chaos these days due to the huge amounts on loan.

So for an average FHB couple on say 100k, they can borrow 600k. With a deposit saved they are looking at 700-800k properties. In any major city, they are therefore restricted to apartments and townhouses.

Regional data would be more useful. What's the average FHB mortgage for Auckland for example?

I think nz housing market will ultimately be affected by offshore events cascading into nz . High energy costs leading to unemployment our dollar dropping contributing to high import costs forcing high inflation and interest rates to match . The RBNZ and government will be unable to influence housing prices in the face of such an event.

A developer I know well and trust told me today  their costs have increased circa 30-35% in the past 18 months.

Try and sell. Not sure the demand will be there at those prices …

Exactly, and the demand will keep shrinking as interest rates rise.

That's why I think next year is going to hard for the residential development sector, which is a significant part of the domestic economy.

Am I missing something - no one seems to be talking about this.

This gives credence to the oldish adage of 'DINKs' Double Income No Kids. And when one 'partner' loses his/her job, gets pregnant, or does a runner, you can kiss, among other things, your house goodbye.

That's only $534/week, less than rent for most couples, less than what we were paying 3 years ago for a pretty average place in Mt Roskill.  Sure, there are the other costs of ownership, but allow an extra $100/week to cover insurance, rates etc and that brings it up to about the same as an average Auckland rent.

Yeah, although these are NZ wide figures.

I bet that number is much higher if you looked only at Auckland.

This is to be expected with the lock down in place. First home buyers tend to be less experienced and takes longer to make up their minds.

Investors should seize the opportunity before the restrictions end.

You forgot to preface the word 'Investors' with 'savvy'...

You mean home buyers tend to be more cautious and take longer to make up their minds because its their entire savings earned through hard work and actually being productive members of society they stand to lose if they make the wrong decision.

The only experience investors in NZ have is of a market entirely skewed in their unfair advantage. Maybe the next few years will be an entirely new experience for them.