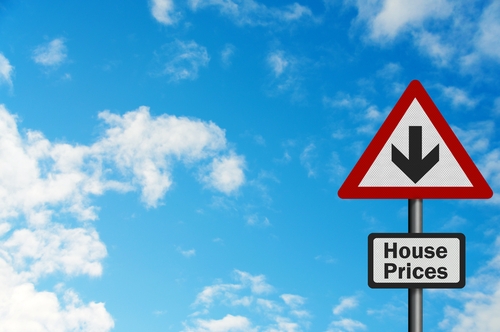 The real estate firm, which lays claim to around 40% of Auckland house sales, says the average sales price dipped to NZ$643,089, down a little under half of a percent on March’s all time high of $645,928.

The slight falls in prices will be welcomed by the Reserve Bank, which has been watching the Auckland market closely as part of its general concern that rising house prices could spark inflation. Deputy Governor Grant Spencer recently warned that the central bank might hike interest rates if rising house prices lead to excessive borrowing and spending and therefore inflation.

But while the Auckland prices eased slightly, activity was still very high.

Barfoot & Thompson recorded sales of 1062 properties, which was its best April figure for 11 years. However, this was well down on the 1430 sales recorded in March.

There were 1532 new properties listed, up 3.8% on those for March and some 21% on the total of new listings in April a year ago.

But despite the increase in properties listed during the month, Barfoot & Thompson is still running on historically low levels of listings, reflecting the shortage of housing supply versus demand.

At month end Barfoot & Thompson had 3467 properties on its books, its second lowest number in more than a decade and down 6.8% on the number at the end of March.

"Building consents figures suggest there has only been a limited increase in residential building demand in Auckland. As a result, we expect the housing market to remain tight and house prices to continue to rise in the region."

She said, however,  the RBNZ’s forecasts for house price inflation at the March Monetary Policy Statement indicated some room for tolerance on continued increase in house prices over 2013. "We continue to expect the RBNZ will leave the [Official Cash Rate] at 2.5% until March 2014.

"We expect nationwide house prices to rise 9.5% this year, and a further 7.5% next year. Notably, the RBNZ's house price forecasts are not too dissimilar from ours. The point of difference is that the RBNZ expects the knock-on effects from house prices to household spending and inflation pressures to be more muted compared to past cycles," he said.

"We're not convinced that this time will be different, and we maintain our view that higher interest rates will be needed from next year."

Barfoot & Thompson's managing director Peter Thompson said the decline in prices during April confirmed that buyers were "taking a measured approach to what they are prepared to pay for property”.

“Buyers are only prepared to pay what they believe to be fair value, and they have not adopted a buy at any price approach."

“...Price acted as a self-regulator and buyers were not prepared to pay over the top prices.”

“While 103 properties sold for in excess of a million dollars, this was a modest number compared to the 637 homes that sold for under NZ$500,000.

Thompson said demand for property outside the inner ring of suburbs around the central city area was still attracting solid buyer support.

How sad, and such a  shock - nobody wants to comment.

Don't worry, I'm sure Kimy/SK/Happy123/Big Daddy will be along soon to tell us that it's different in Auckland and prices will go up to a gazillion dollars by next Friday.

Kimy, your belief in upward trends speaks of the belief of infinite growth and a flat earth.

Neither are logically/mathematically possible. Ergo at some point you get to the top and growth stops and then declines.

Try looking at historical house prices up until the industrial revolution and then afterwards.  The difference/effect is the availability of fossil fuel energy.

Or even the last 100 years and note that end spike and drop back to trend, but note the 1930s, which is where the line is most likely to go IMHO as this is a simialr event...

Note the booms and busts in the 70s and 80s and the revert to trend...at the very least.

Too bad they keep finding more of it...

While 103 properties sold for in excess of a million dollars, this was a modest number compared to the 637 homes that sold for under $500,000.

When will a weighted average be demanded by the property dealing classes and their media minders?

With all due respect Stephen .......never, as long as all these "vested interests" are around..

Get in now and realise this amazing discount!

yeah, smoke some more of that stuffs and you will end up selling your kids too!!

May be the smart sellers are staying away from BT - was told many years ago by a compulsive property investor  "only buy from BT but never sell through BT"..

I was in Auckland recently and ran into the ganet who sold our house in Ponsonby.. he upgared from a 10 years old jap import car to a six figures fancy German made.. life must be good.

The fact that the Reserve Bank is watching Auckland property prices closely is just fantastic. I can sit back and forget all my worries as greater minds have my back, my mind is at ease.

C'mon B & T ...you can do better than that !!   just throw in a couple of high priced outlier sales into the stats and you can turn these figures around :)

We don't want to get SK, Big Daddy et al upset ....I mean we all know that this is against the "mantra" ...Auckland prices ALWAYS go up and this time it's DIFFERENT !

And the never fail "Big 4" banks are right there, ready to dish out their "fractional" lucre, we are ALL on the road to never ending and exponential riches !!!

So we can see that a shortage of housing does not mean that prices will keep going up.  But if we can pursade the banks to drop interest rates and allow people to borrow even more money we can push prices that that little further up. We can set new records for unaffordability and perhaps use a bit more builders bog to enhance the features of the property we could be onto a winner !

Look at the graph. It's up and down every month. You need to average over longer periods to get a trend....but you know that, you're just trolling right?

Did house prices decrease by 100k?

A more important question is how many more Kiwi kids are sliding into 3rd World poverty while you lot play Monopoly with the NZ economy?

Did you consider the question of children in general rather than just your own?

The kiwi kids left becuase they could not afford property, BECAUSE of the likes property investers like you...

Ok yes, there are other factors, but PI's are a significant one.  Just dont try and tell us it's our fault because we left!!!

What is your solution?

What are you doing to alleviate the problem?

"What is your solution?"

Rebalance the economy. Drop all the Right or Left ideological claptrap.

"What are you doing to alleviate the problem?"

Sure I could probably do charity/volunteer work, but one individual can't 'alleviate the problem' that way. Only government policy will do it.

Look at the Ice House and the Incubator, trying to raise investment capital for IT start ups in this country that will bring in a flood of wealth from overseas, create well paid, highly skilled jobs here in NZ.

Meanwhile you lot are pouring borrowed Yen into an asset bubble made up of aging or leaky shit boxes now averaging half a million +.

Aha so you are doing exactly nothing.

You actaully mean keep all the property in the hands of kiwi's who already have property, don't you?

Great will not be flying to moon on broomstick.

As predicted one month ago the wheels are falling off the property market and market is falling flat. Surprised the real-estate industry hasn’t pull out the old seasonal change line yet (yeah right). They are actually starting to talk some sense I guest they have worked out they have pushed the market too far too fast and if it kept going like that it would crash which is no good for anyone.

But the good old greedy bankers still can’t help their greedy little ways and are still trying to talk it up and keep their fat bonuses and even fatter profits going Their next bit of excitement will be interest rates going up then after that the big party will start with mortgagee sale and taking back of the properties.

Please bankers come up with something better than imbalance between supply and demand. This is just an urban myth and what the property spruikers are feeding off all the time (give it up.) In the North Shore of Auckland one of the hottest markets in NZ (Yeah right) there is 25 years of building at Millwater Silverdale and 10 years at Long Bay. The problem is funding bankers won’t fund the developers - they are manipulating and controlling the market. There is a lot of private home building going on the Shore now, which is great, the most for at least 5 years, which will help settle the market.

Take control back of the market and how you spend your money.

I presume you are being facetious? When the government itself is pushing up prices, you just have to know first home buyers are doomed in their desperate quest... nzherald.co.nz/nz/news/article.php?c_id=1&objectid=10881566