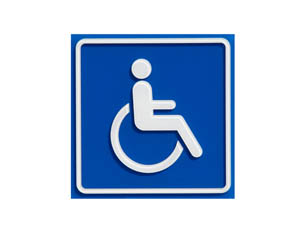 The Department of Corrections has been told to lower the reception counters at its Community Corrections Services offices to make them more wheelchair friendly, in spite of the security issues this has raised.

The issue was the subject of a Building Act Determination after Corrections made alterations to the reception area at its Greymouth office.

The reception counter was built to a height of 1.2 metres, whereas the Building Act required it it be 90cm to be accessible to people with disabilities.

The building was described as one where its staff  "would manage community-based offenders and where offenders meet probation officers."

However it did mot want to instal a security grille above the counter because it wanted to strike a balance between security concerns and providing an open and welcoming experience for visitors that was not foreboding or confrontational.

"Presenting a Fort Knox style interface to offenders serves only to antagonise," the department said in its submission on the issue.

It also said that interviews were not carried out at the reception counter and it was not used for filling out forms.

Those functions were carried out in adjacent meeting rooms which had desks that were suitable for people in wheelchairs.

Corrections sought a waiver from the requirement to have a 90cm counter, and this was supported by the Grey District Council which was the consenting authority for the building work.

The issue was referred to the Ministry of Business Innovation and Employment (MBIE) for a Determination and MBIE in turn sought input from Office of Disability Issues (ODI) at the Ministry of Social Development.

In its submission on the issue, the ODI noted, "...in addition to the counter presenting a barrier to visiting offenders and their support people it would similarly impact on any staff who may, in the future, acquire or have an impairment limiting their mobility."

MBIE's determination found that Corrections was not entitled to a waiver and the counter would need to be 90cm high for consent purposes.

However that decision will be likely to affect more than just the Greymouth office, because in its application for a waiver, Corrections referred to a number of similar facilities being upgraded/installed nationally.

the ODI noted, "...in addition to the counter presenting a barrier to visiting offenders and their support people it would similarly impact on any staff who may, in the future, acquire or have an impairment limiting their mobility."
So being a convicted offender is now a disability on the same level as a person in a wheel chair - and able bodied staff are not allowed any protection from possible threat of an offender making them disabled.

the ODI noted, "...in addition to the counter presenting a barrier to visiting offenders and their support people...
Wasnt that the idea of building the damn thing... creating a 'barrier' so the staff don't have their block knocked off one day.  I can see this dragging on.......

My personal favourite, of course, comes from local government land. Most councils are signed up to some national waste minimisation strategy. At the heart of that strategy is not making rubbish in the first place i.e reducing or eliminating packaging. Why do we have so much packaging? Because the public health staff in the office next door run around to all food manufacturers and retailers threatening to close them down if they don't package food up in mountains of plastic.

The left hand and the right hand....

Back in 2009, before merge of all the councils around Auckland, all of them adopted the principle of reducing carbon foot print.  They ended up with a fleet of small cars, the like of Suzuki Alto, Nissan Micra and Toyota Prirus.  Meanwhile their senior managers decided to go the other way with their gas guzzler V6s and huge 4WDs. I guess it's no different now with Len's Holden V6 instead of Toyota Camry Hybrid.

Wouldn't Brown be better off in a car that exudes good old Christian, family values? No tinted windows of course.

The issue got passed to a Special Interest department for their "opinion".

Example of bureaucracy at its usual foolishness.

Wheelchair or seated staff are _unable_ to work in such a place.
The very real probability of physical violence occuring would create a direct risk to the employees health, one which is predictable and foreseeable, and not able to be eliminated

....although I can see the brave government-paid staff hiding behind a wheelchair user in the hope the criminals won't attack a papershuffler who is disabled (despite that persons willingness to do the criminals harm via paperwork).

Any employer placing an employee in direct threat of harm like that would be liable, even through a disabled person should know better than to place themselves in harms way.

ODI put their ideology before sense... I suppose an expensive court case is the only way to undo such foolish governmental actions.