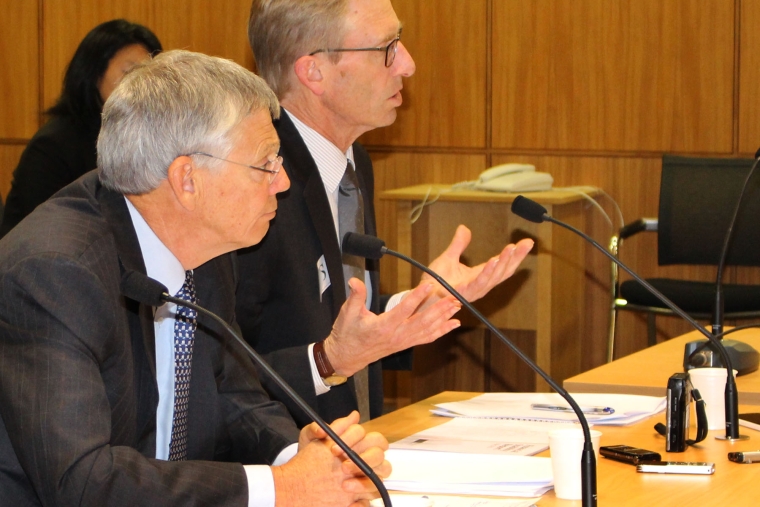 The Reserve Bank of New Zealand has agreed with Opposition calls for better data collection on the extent of non-resident buying in New Zealand as it grapples with annual Auckland house price inflation nearing 20%.

Governor Graeme Wheeler agreed that better data collection was needed when asked about the issue in a news conference announcing targeted restrictions on high Loan to Value Ratio lending to rental property investors in Auckland.

Wheeler also discussed the issue at a Finance and Expenditure Select Committee hearing after the release of the Reserve Bank's half yearly Financial Stability Report. He said the bank's rough estimate was that 10% of buyers were non-resident, but that better data was needed.

Labour and New Zealand First have both repeatedly called for a foreign buyers register ahead of restrictions on non resident buyers, potentially similar to ones in place in Australia, where non-residents can only buy new properties or properties off the plan, rather than existing properties. Australian figures show non-residents are responsible for 25-30% of all property sales in Melbourne and Sydney.

Asked if non-residents buying 10% of properties was a problem, Robertson said: "Even at 10%, that's a significant impact on the market. We don't know the full details of that, and that's the point the Reserve Bank governor is making as well now. We need to be collecting the information on this. The government has had calls for that for years now and it has done nothing."

However, Robertson said he was concerned that the new restrictions on local landlords without foreign buyer restrictions could clear the field for cashed up non-residents to buy an even bigger share of the houses for sale.

"That actually opens up more opportunity for foreign speculators. If you have got cashed up buyers overseas, they now have an opening in the market because there is further restrictions on New Zealanders," Robertson said.

"We want to make sure the government closes that loophole," he said.

"But the Reserve Bank shouldn't be where all our housing policy is made. The government's got a responsibility to make housing policy and deal with issues like speculation from offshore."

Robertson said the Government also needed to look at models used overseas to restrict foreign buyers, including one announced last month in Victoria where foreign buyers paid a 3% tax.

"The government is responsible for dealing with housing supply issues and also for these demand issues, which are not within the Reserve Bank's mandates, and they have effectively given up. They have outsourced housing policy to the Reserve Bank and that isn't good enough," Robertson said.

Robertson was then asked about an option for taxing rental property investors first raised last month by former Treasury Deputy Secretary John Crawford in this opinion piece on Interest.

"I have seen John Crawford's proposal and I think it is interesting and it is worthy of us having a look at. Whether a fully fledged capital gains tax is the way to do that is what we are now reviewing. But we believe there is a range of measures available. A deemed rate of terms is one of those and we are certainly looking at it," Robertson said.

"We don't see that rents are likely to rise significantly. They shouldn't rise, if for example, new owner-occupiers take the place of investors," Wheeler said.

"There is a real opportunity and incentive, for owner-occupiers and particularly first home buyers, to hopefully be able to take advantage of this," he said.

No mention of the self-induced government mandated Tax Advantages

4 Year tax breaks for wealthy migrants, to bring in the minimum necessary to buy an expensive existing residence, and leave the bulk of their wealth overseas in a tax-haven

There are 100,000 non-taxpaying migrants arriving into New Zealand each year while 50,000 tax-paying locals leave each year

An astute high net-worth newcomer will bring in $2 million to buy a property, skew the market higher, establish residency, and leave the rest of their wealth in a BVI or Caymans tax-haven, while they enjoy ALL the benefits of New Zealand's tax-payer funded infrastructure, health, medical, education systems totally free of charge while they draw enough living expenses each year from their tax-haven account.

How to kill the goose

You are wrong. The exemption is only for their foreign income, and even that has limits. See the IRD page here. There are relatively few who this will apply to. It means that income that was not subject to NZ tax before they came won't be for 4 years after they arrive. Note that new income earned when they are in New Zealand does not attract the benefit. Then after the four years, all their worldwide income is taxable subject to DTAs. Just like everyone else.

I don't doubt you can find someone who will try to rort the rules. But it is a very long bow to claim the exception is the rule.

That's a solid list of exceptions - including interest, dividends and rents earned offshore. Given that benefit, why would anyone bring their overseas income-earning assets onshore until the end of the 49 months. The example above implied they had enough capital offshore to draw on that they didn't need to undertake employment locally

We definitely need better data on foreign buyers, and in non-foreign buyers. It would be good to see exactly who is buying more than one property, why, and how much profit they are making on buying-selling without adding any value. Who knows? Maybe then we can do the maths and see if those speculators can somehow contribute to the society through taxes..

Every fortnight when I see my taxes on my work income I wonder whether it's fair to pay taxes on real work when others don't pay taxes on things that don't even require any work at all. It's not that much about the impact or whether in Australia the CGT work well. It's about being fair and encourage growth through productivity rather than trough debt.

Collecting data on non-resident buyers is something I can and will support. This should've being done a while ago but better late than never. The government needs to step up and curtail non-resident investors.

Is the RBNZ having to do everything for this current 'government'? Is National asleep at the wheel or wilfully ignoring the underlying issues?
Next thing the RBNZ will be organising regional development, controlling a more sensible flow of international students, implementing a Rural Bank for small farmers/orchardists, etc.
what an indictment on a lame duck government!

Governments turn deaf in the third term. And blind. And speak of no evil. Monkeys.

Opposition calls? Seems to me like the primary champion of better data springs from these very pages, a certain Iconoclast.

Graham Wheeler might as well fart into a Polar Windstorm .

A few short months ago he said that the 20% LTVR rules would stop the market in its tracks.

The Asians are buying with offshore funds , and they have a shed full of the stuff , more than we could ever print in a million years

Even if Wheeler made it 99 % cash and 1% bank mortgage he could not stop the Asian tsunami .

At the B&T Auction last week there were practically Asians only buying .

At the B&T Auction last week there were practically Asians only buying .

But keep in mind, Asian NZers have surpassed European NZers in the procreation stakes .. so its not surprising they are more in number trying to buy a family home;

The one and only distinction that should ever be made in these arguments is residents vs non-residents.

Still a failure of immigration policy which is supposed to benefit NZr's.
The Australian Productivity Commission concluded there was little or no benefit to Australians from immigration, it had all been captured by the migrants.

Has Wheeler ever said or intended for to effect the market? I thought his only intention was to keep the banks ledgers on the straight and narrow.

I think Wheeler might be waking up to the reality that he's been sold the lemon.
His job is to do the impossible, with ineffective antique tools, which weren't much good to complete the real task in the first place, and he has to do it under the powerful orders of someone selling everything out in the opposite direction.
Not a job for this cowboy...

What a contrast someone with some common sense like wheeler is with our government, who want to keep pulling the wool over everyone's eyes, because they don't want to upset their party donors.
It's government policy for the highest bidders in this country now.

"Look, at the end of the day most clear thinking kiwis will intuitively know that my buddies, sorry Asians, aren't having an effect on the market"
Name the politician who is going to say this sometime in the next few days.

A sociologist from the Massey University says he's concerned the proposed introduction of a foreign property buyer register is being driven by "hysteria and popular racism".
http://tvnz.co.nz/national-news/proposed-nz-foreign-property-register-l…
He's also described as an "immigration expert" and "expert on social cohesion"
I recommend
http://www.redicecreations.com/radio/2014/06/RIR-140604.php
It explains why we don't have an(Y) opposition.

Wheeler estimates that foreign buyers are 10% of "the market" - by which I assume he means the NZ market. That means they are probably about 30% of the Auckland market, since that's where almost all the action is. That's huge! We have to put up with our currency being in the top 10 of most traded currencies but I'm not sure we have to put up with our residential houses being foreign speculative assets.

The data is there, Nats just don't want it to be known.

Foreign Money Is Pouring Into U.S. Real Estate, and It's Not Just Houses

Now that all those pesky small first time local landlords are being squeezed out, the Natz can let their Chinese mates buy all our rental houses so that the Chinese not only own all our farms, but our houses too.

Will in 50 years NZ be a dominion of China?

On the very same day the hypocrisy sets in

Lsten to these two breath-taking interviews

13 May 2015 - Bill English talks to Duncan Garner - it's all too hard
It's impossible to get hard data - too complicated - too tricky - not trying to get it - not going to do it
http://www.radiolive.co.nz/What-does-the-Finance-Minister-think-of-the-…

and on the same day

13 May 2015 - Tony Alexander talks to Duncan Garner
Not possible to build affordable housing in Auckland
New builds in Hobsonville and Riverhead going for $900,000
http://www.radiolive.co.nz/AUDIO-NZ-has-become-worse-off-for-those-at-t…