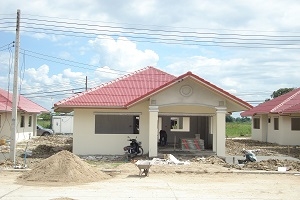 The number of new homes being consented was flat in October and well down from earlier in the year, with the disappointing lack of activity likely to substantially worsen the housing crisis in Auckland.

The lacklustre new consent figures are particularly concerning in Auckland where at least another 1230 new homes need to be built each month just to keep pace with the region's surging migration-fuelled population growth.

That means the number of dwellings being consented in Auckland is running at just two thirds of what is required to keep pace with migration and overall population growth, which is also putting strains on other infrastructure and services such as health, education and transport.

The accumulated housing shortage in Auckland is now estimated to exceed 30,000 homes and the latest lacklustre building consent figures come just a day after new Prime Minister Bill English announced he was dropping the position of Housing Minister, which was previously held by Nick Smith.

On an annual basis, Auckland needs about 15,000 additional homes to be built each year just to keep pace with its population growth, but in the year to October just under 10,000 new dwellings were consented in the region, which suggests the rate at which new homes are being built in the region needs to increase by about 50% before housing supply will start to match up with population growth.

However consent activity has surged in Wellington, where 181 new dwelling consents were issued in October, compared to just 69 in October last year.

In the 12 months to October, the total value of residential dwelling consents issued (including consents for additions and structural alterations to existing buildings), was $12.457 billion, up 22.8% compared to the previous 12 months.

In addition another $6.1 billion on non-residential building work such as commercial premises was consented in the 12 months to October, up 7.2% compared to the previous 12 months.

See the interactive chart below which shows the dwelling consent trends in each region:

Time for a new Broom to come in and change the story, this lot have shown years of not being on top of the situation

Banks have closed up shop on lending to Developers, Builders and Chinese that is why House building supply is decreasing.

No Buyer demand equates to no supply simple economics!

The Unitary Plan is now just a pipe dream!

I concur TS. we were doing a lot of mez up until 6 months ago. this has all but dried up as the banks will only fund new deals once another one has settled. in other words demand is constrained to the status quo.

Herald has reported a more positive(?) spin on this article:

Yet more proof National have failed to Govern housing supply over three terms.
See another major Real estate agent in Hamilton up to no good - rotten to the core. To much abused power / conflict of interest, should the system change?

Did Nick Smith even build anything or were they just nice warm dwelling consents?

The Government needs to Talk to the Australian owned banks to enable them to" free up lending" to solve the restricted housing supply crisis created by restricting the Buyer demand which in hindsight was a poor decision!

This inadequate building construction rate in response to a immigration boom is an under reported problem. Thanks Greg and Interest.co.nz for supplying the numbers to the public.

I wrote an article about this in November -but it didn't get much coverage.
https://medium.com/@brendon_harre/housing-affordability-learning-from-e…

Developers, Builders and Overseas investors in New House builds that Auckland needs, see the media with Barfoots Auctions only selling 25% so why would they go ahead with investing in new developments if they know they can not sell the houses?

Economics 101 No Demand equals NO Supply !

Also the majority of owners are probably investors who can afford to sell at inflated price.
Rather than people who actually need a home to live in at affordable levels.
The Governments bias is for the wealthy investor who feed of the working poor.

Would you employ these people, if this were their resume, never mind all the other failures to perform?.

Would you train up these people to a higher office and promote overseas?.

Would you build an Empire on their utterances?.

Would you credit their Bank Accounts with your hard earned money?.

Not rocket science really that Building Consents aren't that high in Auckland.
The fact is that the Banks have tightened up on their lending due to the LVRs having a huge influence obviously as the Banks won't now lend as much.
It isn't going to improve either until the LVRs are altered back to where they were.
Prices are going to remain high due to the demand as not enough new single storey homes are going to be built.

Yvil, well aware of,that butmit is the flow on effect that happens when investors are not getting the money to purchase the lower priced houses so that there are less property,sold.
Those people who want to trade up to a new build therefore don't sell,to be able to build!
The other thing is that the developers also have more difficulty obtaining the funding to develop without the presolds and if the buyers aren't selling the same then the contracts don't happen.
It is a cycle!

Or maybe, just maybe, FHB's or young families could buy those houses instead.

We could have zero immigrants and Auckland would still miss it's required building rate.

Thanks to Auckland Council's absurd land supply restrictions we can only "solve" the Auckland housing crisis when we have zero immigrants and 10% of Auckland's natural growth leaves town. 10% of all children born to Aucklanders have to leave and no immigration - then we will be good. Like Adelaide.

You would like to see Gareth Morgan in parliament?
His performance on Paul Henry clearly displayed that he hasn't got the temperament for politics and is no good under pressure.

Auckland doesn't even have enough trades people. Im one of them who left the country
I see here every week that my decision was correct
I love Auckland & was born there but John Key for all the hype has been a proven disaster dealing with housing & so it seems will be Bill English
There simply is no shortage of money at all. I can borrow here and build in Auckland and I'm on the other side of the planet.
The restrictions are with land available to build on. A paradigm put in place by the City Council and apparently still not rectified regardless of all Nick Smiths hype.

Government needs to cut immigration by a lot. It doesn't want to because it would make its oh so important GDP growth number fall. We may need to vote in a government that looks beyond it's own stats.

To solve the Auckland housing crisis (under current Council rules) will require nil inward immigration and 10% of all of Auckland children to leave the city forever. to solve Auckland doesn't need mere immigration tinkering, it needs to combine Donald Trump's wall and the Pied Piper.

Here is an interesting documentary from 1946 when NZ had a housing shortage of 26,000 families. Production had slumped during the war years and needed to ramp up again. The State then was very much part of the solution.

Great link Brendon. Well worth it.
Thanks.