Unprecedented net migration has little effect on monetary policy as younger people arrive, but macro-prudential tools may help if it feeds through to higher house prices, RBNZ says

Unprecedented net migration has little effect on monetary policy as younger people arrive, but macro-prudential tools may help if it feeds through to higher house prices, RBNZ says 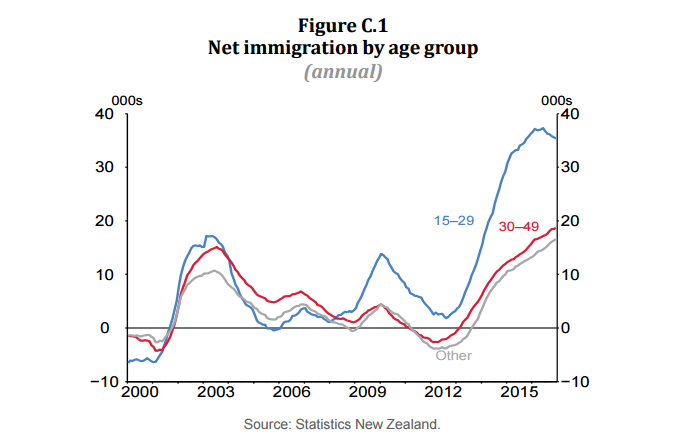 And if the composition remains the same in coming years – more students and single work permit holders than before – this should not make much of a difference to monetary policy, Assistant Governor John McDermott added during a press conference on the RBNZ’s February Monetary Policy Statement.

However, the Bank may have to dig into its macro-prudential toolbox if migration feeds through to housing pressure in the future, Wheeler said. Tools like tightening bank capital requirements and loan-to-value ratios could all be wheeled out to help contain any pressures from a migration boom, he said.

The RBNZ openly admits that it, like many forecasters, struggles with net migration. While it can be pretty confident on picking potential departures (due to differences between the NZ and Australian labour markets), the inward migration side of the ledger is difficult to forecast, Wheeler said.

New Zealand’s inward net migration last year, adding over 60,000 to the working age population, was “unprecedented,” McDermott said. However, research suggests it has not fed through to inflationary pressure in the current cycle, whereas in 2001 a higher proportion of returning families saw migration feed very quickly though to inflation and house prices, Wheeler said.

'DTIs can be very helpful if managed well'

The RBNZ is ready if pressure does show through, Wheeler said, highlighting the central bank’s ‘macro-prudential toolbox’ used to help shore up the stability of New Zealand’s financial system.

The comment led to the inevitable questions from journalists about Wednesday's announcement by Finance Minister Steven Joyce to require the RBNZ to conduct a full cost benefit analysis on a new tool the Reserve Bank has been hanging out for – the ability to regulate debt-to-income ratios for home buyers:

Is the bank disappointed at the decision? What if the NZ housing market takes off again and you’re left needing the DTI tool?

Wheeler maintained that even if the ability to regulate DTIs was in the toolbox, the Bank would not “necessarily” use it at present.

The RBNZ has already carried out a good deal of research on the matter, collecting a trove of data from New Zealand banks on debt-to-income ratios, Wheeler said.

“A lot of countries have used DTIs – they can be very helpful if managed well.” But, there are always unintended consequences, he added. Finance Minister Joyce yesterday highlighted concerns of how the tool could affect first-home buyers.

Whether locals will be in competition with new, younger migrants is yet to be seen. But the Reserve Bank is keeping a close eye on the make-up of who is arriving.

Here's a few responses to the one liner: “A lot of countries have used DTIs – they can be very helpful if managed well.”

We need to acknowledge that:
1. We are not exactly know for our management of tools and issues and we have already caused many unintended consequences in process.
2. We need to refrain from the 'monkey see monkey do' attitude (no disrespect intended) and show some ingenuity to tackle issues.

Every time I read that X country has done it so we should follow the same path - makes me cringe just a little bit more. Not saying X country was silly but just saying that we are unique with unique problems and need unique approach sometimes. Lets acknowledge that to begin.

Totally agree. Plutonium is also very useful if managed well, but notice the RBNZ isn't lining up for that however.

Agree with most of the premise of not blindly following another country's lead.
However, most of your examples are misleading, as the RBNZ does not have a mandate to set immigration settings, or add taxes such as CGT, nor give public grants for personal technology. They do however have a mandate to ensure a stable economy, and a functional (and sane) banking system. As it is, in order of influence on the housing market and stable banking system, I would rate the central government and local government as having a much larger influence than any fiddling the RBNZ can do.

We should be managing to total population goal and discussing that. How many people we want to be living here. Migration (or immigration) is a component of our population will be - but only a component.

I sometimes wonder if the RBNZ actually know what they are doing .

Our GDP is the same as 10 years ago , our employment rate is the same , so why is the OCR so low ?

Only inflation is down but not in " tandem' with the OCR

Low interest rates have only 4 outcomes ( all of which are undesirable) :-

Its a recipe for long-term disaster

Your numbers are just plain wrong. (Only disputing your numbers here ... )

Thank you for correcting me ............I took the annual GDP numbers in their simplest form , not considering the growth in either real or nominal terms , and did not consider the effects of a 2% higher labour take - up rate in numbers of employed .

Based on this correction , I assume it could be deduced that cheap money has stimulated both GDP growth and labour absorbtion , which I guess are good things .

I still have my reservations about this decade of cheap easy money , however

Cheap materials + low workmanship quality = easy money
This is where we are heading, more and more so in the years to come