Adams defends govt's Auckland house building programme as doing what it can on 5% of land, says onus is on private land-owners; Labour's Twyford attacks National's credibility on number of 'affordable' homes to be built

Property
Adams defends govt's Auckland house building programme as doing what it can on 5% of land, says onus is on private land-owners; Labour's Twyford attacks National's credibility on number of 'affordable' homes to be built

Amy Adams has defended levels of building under the government’s Auckland Housing Plan, saying the onus is with private property owners in the city to lead the way on increasing the supply of affordable housing there.

Responding to questions from Labour housing spokesman Phil Twyford in Parliament Wednesday, Adams, Minister for Housing New Zealand and Social Housing, said the government was playing its part with building announcements regarding the 5% of Auckland land it owned.

If those last two figures are the case, that would put the amount of ‘affordable’ homes at the bottom of the 4,500 to 10,000 range, given the headline announcement for 34,000 houses.

Twyford asked why such a small number of affordable units had been proposed compared to Auckland’s needs. He noted Reserve Bank comments that the rate of house building was insufficient to meet population growth or reduce housing shortages.

“We pointed out very clearly this is about what the government is doing with the less-than 5% of [Auckland] land that we own,” Adams replied to Twyford.

The government’s primary responsibility was building social houses for those most in need, then making sure there were opportunities for tenants to transition out of social housing.

“We have never pretended that this [policy] is going to be a new house for every Aucklander, and nor, frankly as a government, should it be,” she said.

Meanwhile, on why the government had set $650,000 as its ‘affordable’ limit, Adams said this matched the KiwiSaver HomeStart cap and was “to ensure the policy aligns with the ability to access other government first home-buyer support.”

“Our experience to date suggests that a number will in fact be priced well below this level,” she said.

Of the 1,436 homes already sold at Hobsonville Point “28% of them have been sold at or under $550,000. These range from bedroom apartments to three-bedroom terraced homes,” Adams said.

“What we’re not doing, as part of the Crown building project, is building dreamed-up numbers, at fantasy prices, on land we don’t own, can’t identify, can’t pay for and is magically free of any existing properties.”

Twyford put to her that of the 4,500 new ‘affordable homes’ half had been in the pipeline already. He asked how that was a credible plan, “when Auckland has a shortfall of 40,000 homes; last year only 7,000 new homes were completed, according to Auckland Council; and only 5% of those were affordable?”

The government was showing what it will do on the 5% of Auckland land it owns, Adams said.

“We’ve always said that the largest part of responding to Auckland will come from the 95% owned by the market, which is why this government’s supporting things like the HomeStart scheme, like RMA reform, like the NPS on urban development, like Point England which Labour are opposing.”

Twyford put it to Adams that under the current government, the social housing stock had fallen by 2,500 and the nationwide shortage of homes generally had boomed out to 60,000. Adams said she rejected those comments. The public could trust the government to deliver on the promises it had made, she said.

Meanwhile, Adams separately released figures for where building will take place on Crown land in Auckland over the next three years: 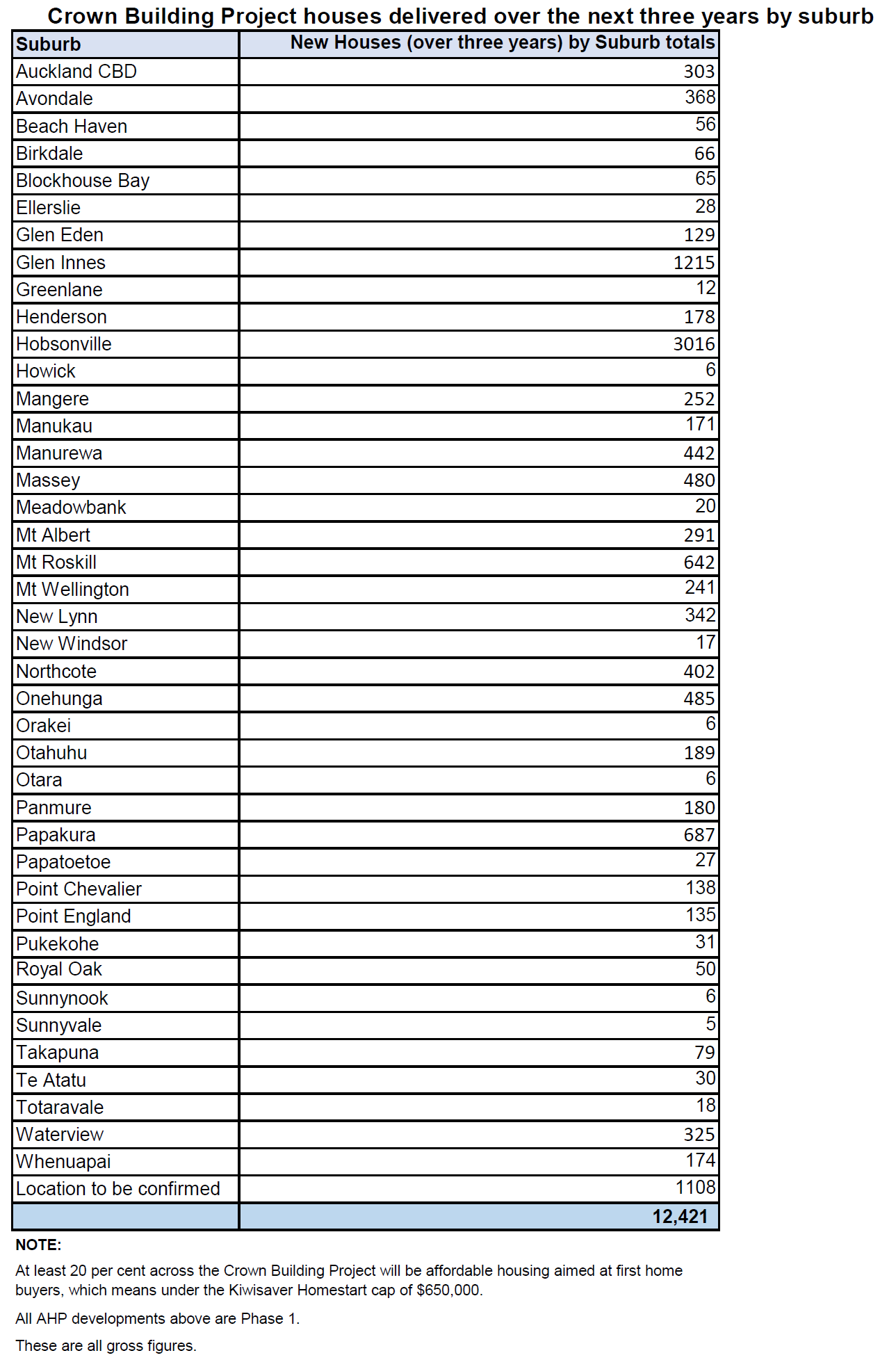 What it could do is a land tax.

I'm hoping a land-tax becomes more and more politically stomachable as time goes on, solely due to the younger generation being locked out of the housing market.

I don't really see any disadvantage in a land-tax assuming that long-term growth and sustainability are the goals of our city planners. A land-tax of ~1% of land value coupled with an equivalent drop in income tax would do a lot to incentivise densification and reducing speculation.

Maybe it would even drive investment based on yield rather than capital gains?

What would help buildings affordability (land prices aside, because they are a direct result of planning zoneration and strangulation over decades, following failed Brit-style planning fads) is a concerted effort to:

Waymad... If u are running for Parliament... you will have my vote..!!

You'll have to remove most of the "quality regulation" we have in local government if you want to actually use land for something useful.

And on the feso side, its tuff because 18% gets taken off the sales price (GST & Agents %).

Does the FHB new build buyer know their "deposit" goes to Govt. take and real estate BMW bro.?
Like FHB she/he does!

Then there are the other costs involved from Building Consents processes, District and Regional Council Consents processes, Health and safety onsite and offsite training etc, Licensing charges, architectural and engineering costs. Building Act and Building code obligations........and I haven't mentioned human errors across the board.......

Very logical idea, I agree. It would bring a lot of housing down the pipeline in a short timeframe. Some of the existing 'gottage' houses look interesting too.

I reckon I could build my own basic 2 bed house for less than $100k if I was allowed to. But it would probably cost more than double that to go through building consent process - architect, geotech, surveyor, engineer, council, and a separate 'certified' tradesmen for every little part of the building process. None of this crap should be necessary to build a small simple house.

And do a "Pharmac" internationally for the supply of material.

I've been banging on aboot this for years, see the collected works here...http://waymad.blogspot.co.nz/search/label/Housing

But as the old saying goes, nothing like a hanging in the morning to concentrate one's mind.. And a Gubmint in election year is just that.

The essential element, as I see things, is the multi-proofed consent. This gets the Councils right out of the way, and puts the onus on the factory/certifier. That guarantee alone is a big impediment for ordinary businesses, so an obvious help there would be some Gubmint backing or legislative relief. As most legislation allows for Regulations to be thunk up today and passed at next Tuesday's Cabinet meeting, that need not pose any great delays.

What's missing, as always in our hapless political invertebrates, is the Will to do it in the first place, the Spine to stand up to the endless howls of rentiers, and the Guts to slog it out for enough time to make a practical difference.

I have a lot of time, that said, for Amy Adams. Perhaps she is the one to burst through the accumulated sludge of decades and get stuff done for once.

ye but Amy and/or Nick are building ~300 houses on point england reserve. It is neglibile and short sighted. Build the other houses first before going after public reserves.

pure politics the way she refers to point england when she and the PM is beating Labour with it. She doesen't use the term point england reserve.

I wonder why no Parnell, no devonport in the list - or are they too rich to get social housing...... new ghetto locations. Anyway, im gunna put a $50 kiddies tent out the back of my shore place - someone can rent that from me for $550 a week - there is a running creek nearby.

Toughen up kiwi, join the army.

Well, they know it's right and proper that the poor folk should be out in suburbs like Mangere. It's a bad use of expensive land to have those undesirables in Orakei, Parnell etc.

Forgetting entirely that we went for housing in various suburbs to avoid the social disconnect and ghettoisation that happens through such approaches as concentrated council flats in one area.

Or maybe its just because they don't own state house land in those areas...

There definitely was in Orakei. Would have thought there still is.