New research from Motu Economic and Public Policy Research finds a very dynamic construction sector with a lot of staff changing firms and many companies both entering and exiting the industry
1st Mar 18, 9:07am
by Guest 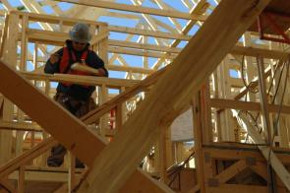 With plans for building 100,000 new homes over the next ten years, construction is a sector at the heart of questions about New Zealand’s productivity.

New research from Motu Economic and Public Policy Research finds that the construction sector is very dynamic, with lots of staff changing firms and many firms entering and exiting the industry.

The research indicates that the high level of worker ‘churn’ is responsible for some differences in productivity between firms.

“Our study suggests that around 75 percent of the higher productivity is because good firms tend to hire good people and around 25 percent is due to an increase in knowledge,” said Dr Jaffe.

For the first time in 2017, New Zealand work visas were granted to more tradespeople than professionals, according to interim figures from Immigration New Zealand. In addition, the Ministry of Business, Innovation and Employment said in February that the country needs another 51,000 construction workers.

“Our research found that less productive firms tend to have more new migrant labour, but also that productivity doesn’t decrease when a given firm hires more migrants,” said Dr Jaffe. “I say this with a caveat that we can’t say for sure what hiring new migrants does. It does however, suggest that the origin of new workers matters little to firm productivity, whether they come from overseas or from other industries.”

Adam Jaffe and Nathan Chappell’s paper “Worker flows, entry, and productivity in New Zealand’s construction industry” is now available on the Motu website. This work was funded by BRANZ.

The "flow of knowledge" piece fits into the professional services space as well.
Lateral hires from other firms or people doing similar jobs in the industry tend to outperform "firm-bred" workers.

“Our research found that less productive firms tend to have more new migrant labour, but also that productivity doesn’t decrease when a given firm hires more migrants,” said Dr Jaffe. I have trouble getting my mind around this. It would seem to me that if we closed down the less productive firms then the average productivity would go up and many migrants would be unemployed.
My own experience of being a foreign worker in PNG was that holders of work permits were far more experienced and productive than the native workers; this was nothing to do with racism but employing a foreign worker cost so much in both salary and work permit that employers searched the world for the very best. If they made a mistake and a foreigner on a work permit was not the very highest standard they were sacked and had to leave the country. The costs gave employers a very strong incentive to train and retain national staff.
Maybe NZ should do the same - get the best international building trades-people possible; pay them well above average and charge a hefty fee for the work permit. That would be a win for the governments revenues and a win for training Kiwis (such as my son the young apprentice builder).

The statistics on Immigration's official website classifies food trade workers and animal workers as 'tradespeople'. Unless bakers can build houses of gingerbread, cakes, candy and sugar, I don't think they help alleviate the pressure on infrastructure. As per the housing shortage statistics from yesterday, these workers not produce much less than the NZD 60-65,000 needed per new migrant to fill the infrastructure gap.
It is about time we start looking at these stats and not just dole out visas to anyone who walks through the door with or without a job offer.

Thanks for your research. Now I wonder what the professional jobs are and how professional and well paid they are.
Agree with your comment about taking far more care about visas. However I've heard it said that very high quality candidates can be put off by the bureaucratic delays (waiting for police clearances from several countries for example) and they just go elsewhere. Maybe a high speed visa route for brain surgeons and the like but NZ kept safe by a big payment pledged as security.

Hmm, I think the words are pretty easy to analyse; chef means underpaid vegetable chopper: retail manager means shop assistant on half minimum wage, etc. We are not dealing with people who by and large go along with the rules here. They come from cultures where rules are imposed unfairly and so they have no respect for them, merely the fear of getting caught, which in NZ is not exactly terrifying.

Exploitation of overseas workers and not meeting the market to pay NZ workers.