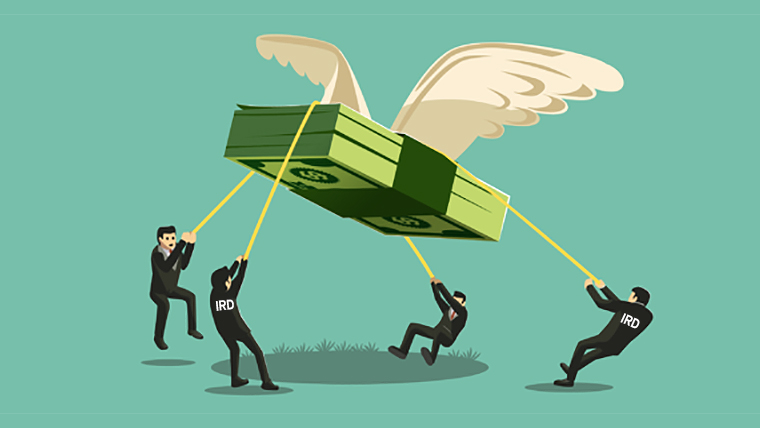 The Government is looking at ways of preventing people from diverting income through companies and trusts to avoid the top personal income tax rate.

Because this is above the rate for companies (28%) and trusts (33%), the Revenue Minister David Parker and Finance Minister Grant Robertson are worried people will use these entities to lower their tax bills.

They’ve directed Inland Revenue to address the issue in two or three tranches. The first, outlined in a new discussion document, concerns dividend integrity and income attribution measures relating to the use of closely-held companies and trusts. People have until April 29 to provide feedback.

A possible third tranche could consider integrity issues when it comes to the way income derived from Portfolio Investment Entities (PIE), including KiwiSaver and other investment funds, is taxed. The most someone can be taxed on PIE income is 28%.

Inland Revenue noted that while it’s mainly concerned about people avoiding the 39% tax rate, the proposals being looked at could also affect lower income earners in situations where some or all of their income is earned via other entities.

It recognised there’s always been an integrity issue, but the introduction of the 39% rate could make it worse.

Inland Revenue noted there was bunching of income declared by self-employed people at the $70,000 mark in the 2019/2020 tax year. Furthermore, Inland Revenue said that the 350 high-wealth individuals and families (people with more than $50 million in net assets) it has data on, use or control 8,468 companies and 1,867 trusts.

In 2018, these people paid $26 million in tax, while their companies and trusts paid $639 million and $102 million respectively, showing there was a significant amount of income being earned through entities with lower tax rates.

Inland Revenue recognised that as long as the income tax rate is higher than other rates, there will be an “arbitrage incentive”.

It noted the gap between the top income tax rate and the company rate is smaller than in most OECD countries at 11 percentage points. Nonetheless, it said New Zealand’s lack of a general capital gains tax, heightened this arbitrage incentive.

To the details of the first tranche of changes, Inland Revenue proposed the following:

"That any sale of shares in a company by the controlling shareholder be treated as giving rise to a dividend to the shareholder to the extent that the company (and its subsidiaries) has retained earnings. This will trigger a residual tax liability for the shareholder. The company should also have an increase in its available subscribed capital (ASC). This ASC increase will address a current inequity in the imputation credit continuity rules and prevent double taxation upon liquidation.

"That companies be required, on a prospective basis, to maintain a record of their ASC and net capital gains, so that these amounts can be more easily and accurately calculated at the time of any share cancellation or liquidation. These accounts would be similar to the imputation credit accounts already required to be kept but would have fewer entries.

"That the “80% one buyer” test for the personal services attribution rule (that is, at least 80% of the associated entity’s income from personal services during the income year is derived from the supply of services to one buyer in particular and/or an associate of the buyer) be removed."

"Should the 80% threshold for the “80% one natural person supplier” test (that is, at least 80% of the associated entity’s income from personal services is derived from services that are performed by the working person and/or a relative of theirs) be reduced to 50%?

"At what level should the threshold for the substantial business assets test (currently the lower of $75,000 or 25% of the associated entity’s income from personal services for the income year) be set?"

Will be completely irrelevant when Labours envy tax rate is reduced back to the Trust rate (the sensible & efficient solution is to align the top personal, trust & corporate rates).

Labour and National will ignore a general capital gains tax entirely and close the loopholes by some poorly written legislation which is likely to have a number of unintended consequences.

The tired old defense from the Labour-National coalition against CGT has been that it puts "mum-and-pop investors" out of pocket. In reality, 22% of our entire housing stock is owned by investors with 4 or more properties (one owned-occupied).

If you were running an actual business instead with 100k+ income and/or $3m+ in assets, authorities would hold you to much higher standards on financial reporting as well as H&S for your customers. Since housing investors want the same treatment for expense deductibility as other businesses do, they should all register legal entities, prepare annual corporate tax returns, pay ACC employer levies and be subject to H&S audits on their business sites (rental properties).

An actual business would also be taking out business loans at 8% interest rates instead of personal use mortgages.  Pick and choose the good bits from both sides, a business for tax write off purposes but it's a "home" for lending purposes or if the tenant wants to hang a picture.

That is the Bank's criteria

I could have sworn that we were told the 'honesty box' system would be enough to maintain the integrity of the top tax rate when this was proposed way back in 2017. Since then we've had to increase FBT and now we're looking at rewriting the ordering rule.

Maybe an alternative could be that we don't leave the same tax system in place for 30 years and only notionally adjust the thresholds once a decade, if that?

Nzs trust laws allow substantial opaqueness to hinder rational and fair taxation to occur this is what prevents a tax free threshold being brought in to assist lower earners and incentivize working for a living in place of reliance on the state . With a growing lower class due to housing policies that appear to be set to entrench poverty and even subsidize rent to assist investors to pay off their mortgage at the taxpayers expense. A more grossly unfair and stupid economic structure would be hard to imagine let alone design.

In an interview back in 2017, then-revenue minister David Parker conceded a “small” tax loophole still existed, but closing it wasn’t a priority. His government instead focused on taxing incomes harder by doing nothing and letting bracket creep do its thing.

Nobody batted an eye when last year an NZ-based foreign trust was named in the Pandora Papers that held more than $180m in assets for a Moldovian oligarch who embezzled $1b from Moldovian banks in 2015.

As long as you pay and tax yourself at fair market salary equivalent, not just the tax threshold minimum, then the rest can pass out as dividend at the lower rate. Let's remember, the people this applies to are paying by far the majority of tax in NZ, and is also why so many have been leveraging property debt to avoid it.

The lower (Co) rate is only applied as the earnings are first made. As Soon as that money is used for personal use, the higher bracket (personal rate) applies.

So no one does this avoiding anything, this is a company running a surplus (savings). No difference between this a any large corporate. Now If I can live of 70k and want to draw down (pay higher tax on) the rest later (say when I retire, or as needed ie holidays) whats the problem?

Or would you rather pay the higher tax rate, not store any company reserves, and go on the dole queue whenever there are the usual ups and downs of operating a business.

If self employed types run a company and pay salaries of 70k, they are not avoiding tax on the rest. The moment that company earnings are distributed or drawn for personal use the tax is calculated and paid. If its not distributed then it cannot be used.

Imagine telling a bank, that they had to pay all cash surplus and profits to shareholders each year and could not run any cash reserves.

If your self employed u get the same risks/reward as big corporates. You also get the same operating rules, costs, indemnity insurance, ACC etc, no one helping on kiwisaver.

Also. Of course wealthy people have higher ownership of companies, and need for trusts etc. These are not things that you need if you only have $500 in savings. What else you going to do. Put 50 million in my local bank call savings account?

No more tax changes until the next election labour.

More red tape to fix an issue created by an ill thought out policy that was announced to win votes.

The first course of action when Luxon becomes PM will be to reverse these terrible tax policies and restore some coherency to the system.

Here we go again, This govt loves screwing everyone

Roger Douglas got it right in the 1980s when aligned the company, trust and personal top tax rates at 33% and introduced GST at 10%. There was harmony and tax morality improved significantly. "Cashies" dropped considerably. Since that time, dopey elected nitwit and crusty IRD bureaucrats have fiddled unwisely to get us into the mess we have today. Caygill and Cullen (Labour) and Key (National) subsequently increased tax rates and GST rates to the out-of-kilter obscene levels we have today and tax morality has gone out the window again as hard working taxpayers (not 'Working for Families' recipients) scramble to keep their hard earned income.