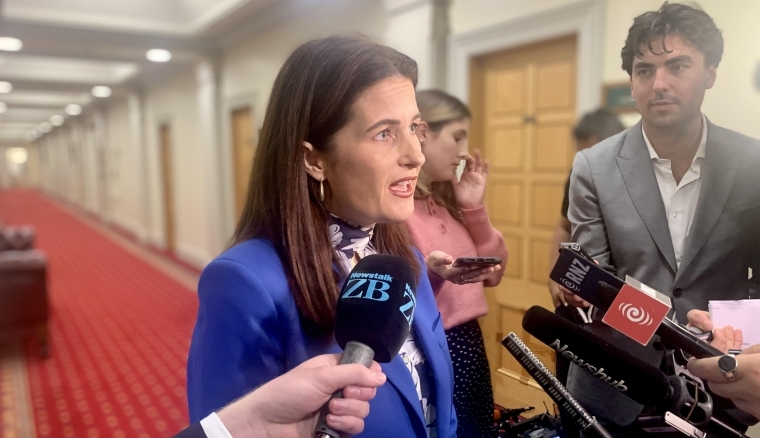 The National Party won’t commit to continuing contributions to the New Zealand Superannuation Fund, should it be elected to govern at the 2023 election.

She said National would decide whether “fiscal conditions” do or don’t allow for contributions to be made when it releases its fiscal plan in more than a year’s time.

So as it stands, the party is yet to decide whether or not it would continue contributions to the Super Fund.

The Super Fund was created by a Labour-led Government in 2001 to smooth the cost of superannuation between today's taxpayers and future generations. It sees government contributions invested in a global portfolio. Withdrawals from the fund are currently forecast to start occurring in 2033/34.

When National was last in government, it suspended contributions in the wake of the Global Finance Crisis, between 2009 and 2017.

If National was elected to govern in late-2023, and paused contributions for the years to June 2025, 2026 and 2027, it would save $5.44 billion, according to the Treasury’s Super Fund contribution rate model.

The estimates are dependent on a number of variables, including a projection the Super Fund would deliver annual returns of 7.9% in the three years to 2027.

National, ahead of the 2020 election, campaigned on halting contributions for 10 years.

Its Finance spokesperson at the time, Paul Goldsmith, told interest.co.nz, “We just take the view that at a time when we’re borrowing colossally, it’s better to be spending that money on New Zealand and on improving the infrastructure of New Zealand rather than putting it on global stock markets for use in 20 or 30 years’ time."

The Super Fund was created...to smooth the cost of superannuation between today's taxpayers and future generations...When National was last in government, it suspended contributions

Never miss an opportunity to live off the wealth of coming generations instead!

Didn't they end up suspending contributions last time there was a downturn in the market? IE, exactly when you should be contributing.

There is nothing remarkable about the Fund other than it is forced savings, the returns are largely what anyone managing a diversified portfolio of assets would achieve. If you revalued Crown infrastructure spending as the Fund marks it's investments then you'd see at least the same returns if not greater. I'd be very happy if they suspended contributions in favour of infrastructure.

An 18K tax cut could go towards putting a new driveway on one of Luxon's properties I guess.

That understates the personal benefit for him. That only accounts for a salary as a future prime minister, it discounts his significant wealth and tax owed on the returns from his investments - property or otherwise.

The government's decision to set up an independent Infrastructure Commission was a step in the right direction. Our public sector currently has a fragmented approach towards planning and building public assets, marred by ideological interventions from the government of the day.

So to your comment, we could have a national super fund that invests big in productivity-enhancing infrastructure projects.

CDPQ, despite all its criticism, has championed mass transport infrastructure in Canada and is now actively engaging in similar opportunities outside Canada.

I suggest you check out the disastrous impact the NZSF had on the Auckland Light Rail proposal to see how that would end up. It hugely blew out the scope and idea of the scheme with a proposal that would have locked in gold-plated returns it and a foreign pension board at the same time. Now we have a delayed, bloated mess of a proposal and we're no closer to building anything.

This idea of the Superfund investing in our infratructure is fanciful and ignores the fact that the Superfund has to make a return like any other PPP investor would - and that doesn't nessacary work out in favour of the people who will be ultimately using or paying the actual operating costs of said infrastructure on an ongoing basis. No point in having airport light rail if we've locked in such massive overheads that no one can afford to ride the thing.

That is a salient observation. You only have to look at Sydney to see how privatising infrastructure works out for the average punter, the Vampire Kangaroo profits at the expense of everyday Aussies. A return trip to Sydney airport from Penrith is $42 of toll's today, inflation indexed it will be $50 withinin 2 years.

I agree with the entire mess that NZSF and CDPQ left behind but a lot of that is due to a combination of alarmingly high costs of infrastructure building in NZ and poor planning practices in our urban areas. Moreover, multiple governments and councils have been reluctant to convince tax/ratepayers to foot the bill of ALR. So they had to come up with even ideas like the Auckland fuel levy and value-capture that have met with opposition.

As a result, PPPs have to pass on the bulk of the enormous estimated build costs to the future users through high ticket prices, making the case for such a large project unfeasible to begin with.

Have a play around with this https://roads-waterways.transport.nsw.gov.au/sydney-motorways/toll-calc…

$265 per week in tolls for a car/motorbike to get from North Sydney to South Sydney per week, or approx $22k of salary pa. For a light truck that becomes $800 per week.

I wonder how keen Luxon is on personal and business car and truck travel and parking paying for itself fully. Whether it's as keen as regarding public transport.

But RUCs pay for all things reading and subsidises bike lanes and pedestrian stuff.

If only that were true. LOL.

Sort of, user pays ends up making the most efficient and cost effective transport modes the most attractive. Removing the massive roading subsidies is a good thing overall for mobility, health, safety and access.

That's assuming there is a viable alternative to pivot to. People who push this angle never seem to want to include the value of someone's time when it comes to explaining why we should spend hours a day on buses or trains - it only works if people's time is functionally worthless. I would contend that for people with families and who do not get to set their own hours, it is worth a lot more than planners care to admit.

The most effective way to drive this kind of change is ultimately at a land-use and planning level. But again, actually making things happen is difficult.

How about if they suspend contributions in favour of tax cuts?

What we need in the future is a strong well-staffed health system, decent public transport infrastructure, secure energy and food, climate adaptation measures, and an economy that is lighter on resource use and more equitable in its distribution of benefits. Invest the money in the future! We can't stuff sandbags with cash.

Agreed, why place cash with 3rd party investors (and pay them considerable fee's) via the Fund when our health infrastructure is creaking? I'd rather improve the lives of Kiwi's today and invest in better roads and infrastructure than place more cash with US private equity funds.

Well you could buy a hell of a lot of sandbags for $200 Billion. Although with National Party goggles on they would probably say taxpayers could buy plenty of sandbags themselves if they gave out an cumulated $200 billion in tax cuts over 20 years. I’m jesting of course - National would only give half of that as tax cuts, and the other half would go to building a 4 lane motorway all the way between Auckland and Wellington. The previous sentence will either delight or horrify people depending on their political persuasion.

So late that by the time it's done it'll probably be less relevant, as resource and cost constraints reduce personal car travel.

I couldn't disagree with any of that, but I very much doubt that National would deliver such a package. I am certain that they will suspend contributions, but have little faith that they would use it wisely.

They are blinkered in favour of tax cuts for those in the middle and above, together with what they call fiscal rectitude-ie cutting the debt/GDP ratio. I recall that when it was in the low 20s, national campaigned on reducing it to 15%.

Agreed. Their position is basically that a small Govt and low taxes will enable more people to keep more of their money, and that those people will then make better spending decisions as individuals than Govt. That may well be true at the family level - but it quickly falls away when you are talking about a whole community over generations. I only have 20 neighbours and it took us 2 years for 15 of us to agree to put LED lights in our shared-cost streetlighting (broke even in two years!) You would have thought that in a country with major natural disasters and a turbulent world economy, any Government might come round to the idea of a bit of state planning...

Also things that the former National Government chose to "suspend contributions" too.

That sort of thinking is generally at odds with the current National Party.

"Non committal" is not good enough. That fund is vital for paying for the National Superannuation for Baby Boomers when they're all on the pension and contributions must continue.

Not good enough that National thinks they can play with the retirement pensions of NZers.

On behalf of people my age who will be working until they die to clear mortgages on their first homes as a result of the effect boomers had on property prices: maybe try having fewer cafe lunches and cut back on takeaway coffees.

As long as they continue to take \ keep \ get their fat entitled MP's pension..... they do not care!

Don't care about the super fund.  But is tragic neither the Lsbs or the Nats have progressed Kiwisaver as they should have.

If all were contributing properly to KS the superfund would be outclassed.

How much of a reduction in people's take home income do you think they could afford to lose at the moment? I would suggest that for many, the answer is 'basically nothing'.

They look as bad, if not worse, than the Red team.

Sadly for me, this is a nail in the coffin for Voting National in the upcoming election.

This policy decision reeks of short term thinking and takes us back to when National last decided to suspend payments into the Super Fund. It was wrong then and it is wrong now.

You only need to look at Australia's Future Fund to see how much better off New Zealand would have been had those payments into our Super Fund been maintained.

New Zealand is sitting on a knife edge, where long term thinking needs to supplant short-termism to get New Zealand moving forward. The precipice for New Zealand's failure to secure the future is already upon us all.