Guy Trafford is trying to avoid an unbalanced battle with MPI over auditing costs. And he takes a look at the honey battle looming between New Zealand and Australia

Guy Trafford is trying to avoid an unbalanced battle with MPI over auditing costs. And he takes a look at the honey battle looming between New Zealand and Australia 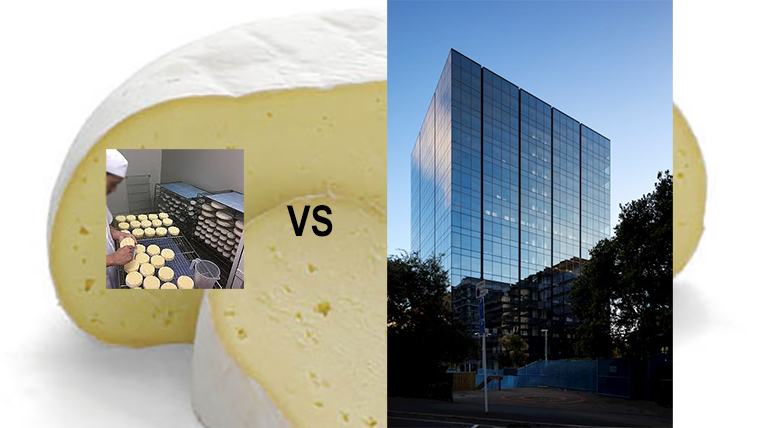 Many readers may remember Biddy Fraser-Davies who died a little over a year ago. She was a tireless campaigner for the smaller scale cheese makers in New Zealand in their battle against bureaucracy, notably MPI .

The argument has always been that they, MPI, treat all milk processors as the same, regardless of scale. With a charge rate of somewhere around $186 per hour and compulsory annual audits and ‘fees’ they can often become one of the larger costs an artisan cheese maker or the like may bear.

We are among the above with a small ewe milking flock (200 ewes) whose milk is turned into cheese products and the like. For the last three years we have our annual audit done by an MPI agent from Timaru, as Christchurch, the nearest office, does not have a suitable person. Because of their deficiency in staffing we have not had to pay the travel costs. So far all reasonable and fair, although still an expensive exercise.

Unfortunately, the agent we have been using and built up a sound relationship with is only allowed to complete three annual audits and then must pass us on to another agent. This is in the interest of making sure no favours are built up over time and we are not being allowed to slip in standards etc. Probably a sound policy although somewhat paranoid by MPI especially for the smaller sale operators.

However, as indicated earlier these technical agents are a fairly scarce breed and the replacement auditor is based in Tauranga. So what’s the problem you may ask? If Timaru pay travel then it would seem only fair that MPI would carry the cost for Tauranga also. But oh no far too simple.

We have been told that not only do we have to pay travel but also the accommodation costs as well.

Whether we are also required to pay for the travel time has not yet been laid out, but if cost recovery is the aim of the exercise then it would seem likely. As MPI hold all the cards and could close us down if they deemed there was a ‘problem’ here it makes any negotiation highly unbalanced when it comes to ‘power’.

They also dropped this latest ‘cost’ information on us with little over a month to go until the due audit date, leaving little time to look at options. We’ve never had a problem with the individuals from MPI but the policies handed down (presumably) from head office have stuck in the craw more than once. This one may require a chat with our local MP and also the Minister of Primary Industries Damien O’Connor.

We feel this is an abuse of their power created by their lack of suitable resourcing. Anyway, watch this space, although I do not have a great feeling about this.

Sticking to the topic of bureaucracy, the Manuka honey industry look to have a battle on their hands in trying to protect the New Zealand ‘brand’ from slipping into overseas opportunists’ hands - notably Australian. Not content with claiming pavlova, Phar Lap and Crowded House to mention a few notables they are now trying to build an argument around the brand of manuka honey.

Fortunately, it appears the Australian Government has chosen not to get involved as that could tip the financial scales in their favour in the legal battles ahead in setting a certification trademark in China, which is the largest market for the product.

In fact it gets better as the New Zealand Government has contributed funds to the tune of $5.7 mln to help New Zealand beekeepers and New Zealand seem to be winning the battle.

The Australian argument stems from the fact that it is likely that manuka (a Leptospermum scoparium) originally came from Australia, but a very long time ago (1,000’s of years). Certainly, before any habitation occurred in New Zealand.

New Zealand is also fortunate in that we only have one Leptospermum scoparium species (manuka) whereas Australia has up to 80 different varieties which confuses the issue for them somewhat. They also claim that as the brand does not include the macron over the ā then it is not really a Māori word and so no claim can be made to it. Apparently, there is plenty of planting of manuka occurring in Australian to try and bolster their production. There is nothing we can do to stop that, but the way it is rapidly heading they will have to call it something else than manuka.

If the Europeans can prevent us calling cheeses and wines after their traditional name, then the argument to protect manuka seems relatively clear cut. Despite the strength of New Zealand‘s argument the Australians’ are not likely to let the issue go without a fight and it may be a while before this one is resolved.

Time now, to start a letter to some MPs.

When governments tip the balance so far in the favour of regulators, you are going to get these sorts of inequities. Guy is lucky that he has a high profile and might be able to make enough noise to get MPI to back off. The average Joe won't be so fortunate.
Likewise, the difference in treatment of private companies and government entities that lose confidential data is instructive. It's practically a crime for a private company and sanctions often ensue. For government entities, you just blame a contractor and come out smelling of roses. Not likely to be a defence for private companies.

Not like MPI give the feeling of being on top of their game.

It sticks in my throat, paying 186$ +get an hour for an unqualified council worker to audit me on behalf of MPI

In the big picture, this is just another example of problems associated with legislation trends over many years. Parliament continues to pass Acts full of vague sentiments, but devoid of detail, and which authorise officials to "approve" individual situations..(..i.e. that we plebs meet an array of bureaucratically generated "rules or standards.") This is basically lazy law-making by parliamentarians who don't want to be bothered with technical detail.
Marry this trend with user pays and a reliance by departments on such to meet their budgets, and the result is what this article describes.
What we end up with is a form of quasi-corrupt, standover tactics..."you want an approval? Here's our hourly rate, we will tell you what the total cost is once we have completed the "approval" process". Strangely, once they have your money they have no further real interest in whether standards are being met...until of course the next,... "review"!
Reference "The New Despotism" once a standard text for law students but now sadly forgotten in this age when bureaucrats know best what is "good" for we mere citizens

Nice little business you have 'ere. Pity if, by some mischance, it didn't pass our latest just-invented-yesterday test.......

It would have been good if MPI had been doing some auditting of NAIT implementation.....
Even at $186 per it would have been money well spent.
Did they receive instructions from the Ministry to back off....

MPI are full of young policy analysts, who get bullied into designing policy for the yes management pampering to the big established businesses. The yes management have limited understanding of business, and the costs they impose on small business.

In reality, alot of these regulations are suggested by the big four accounting firms, who are not only advisors to MPI but advocates for big business.

If this country wants to achieve any growth, government have to look after locally owned small business before the interests of the bigger businesses; some of which are overseas owned. The solution here would be for government departments to source advice from smaller business advisory firms, before creating more red tape and inefficient empire building to justify their own existence.

Solution for the Aussies would be for them to start their own brand, and call it teatree honey. If they had half a brain, it would/could be better for them in the longrun anyway.