Farmers say that banks are getting tougher and changing conditions as they seek to contain or even reduce their exposure to agriculture, according to an industry survey

Farmers say that banks are getting tougher and changing conditions as they seek to contain or even reduce their exposure to agriculture, according to an industry survey
27th Nov 19, 5:29pm
by Guest 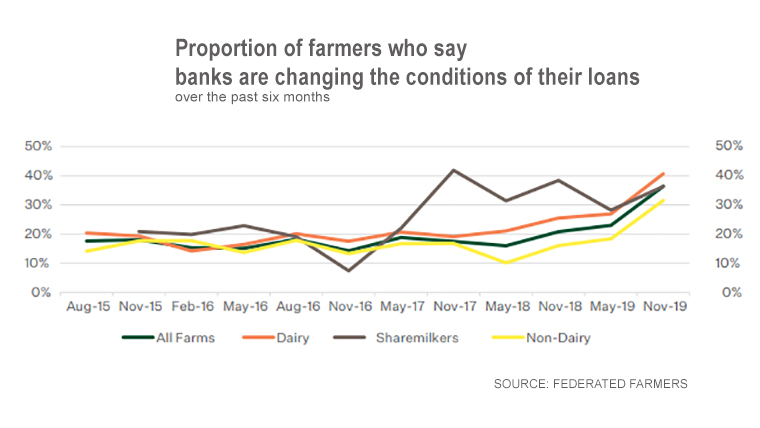 In the last six months farmers’ satisfaction with their banks has continued to erode and the number who feel under pressure from banks has risen from 16% to 23%, the latest Federated Farmers Banking Survey shows.

"While most farmers remain ‘satisfied’ or ‘very satisfied’ with their banks, the number giving those ratings have slipped from 71% in May this year to 68% in our November survey," Feds economics and commerce spokesperson Andrew Hoggard says. That’s the lowest since we began the twice-a-year surveys in August 2015.

"This is disappointing but not at all surprising given what we have been hearing over the past several months of banks getting tougher and changing conditions as they seek to contain or even reduce their exposure to agriculture, and also as they respond - prematurely - to the Reserve Bank’s proposals on bank capital," Andrew says.

Examples of changed conditions putting farmers under pressure include new or increased margins; shifting from fixed to floating interest rates (or vice-versa); selling assets to repay debt; requiring principal as well as interest to be paid; and more information or security being required.

"This might reflect a combination of some poor to average recent harvests, competition from cheap imported grain reducing demand and prices, and the fact arable farmers, because of the very nature of their businesses, have very lumpy farm incomes and thus need bigger overdraft facilities compared to other farm types. Banks generally want to see overdrafts reduced," Andrew says.

On the positive side sharemilkers - often the farming group who in past surveys have felt under comparatively greater pressure from banks than others - have in the November survey expressed higher than average satisfaction rates.

One factor is that the average sharemilkers’ interest rates are now only marginally higher compared to other farming groups. The current average mortgage rates across the more than 1300 survey respondents and all farming types decreased 0.4 percentage points to 4.6% between May and November. Sharemilkers’ rates decreased from 5.3% to 4.8%.

"So it would appear that banks have passed on cuts to the official cash rate, but this will also be a reflection of farmers who have re-fixed at lower rates after a few years at higher fixed rates," Andrew says.

"All in all, the key results from the survey conducted by Research First reinforce the need for banks to treat their customers fairly and for farmers and banks to be proactive in their communications.

"On that latter front, Federated Farmers welcomes the progress of the Farm Debt Mediation Bill, which is about to pass its Third Reading.

"We look forward to December 5 and the announcement of the Reserve Bank decisions on its bank capital proposals, not only because it will provide some certainty but hopefully also to ease cost and pressure on farmers by, from example, extending the transition period from the proposed 5 years to something like 10 years," Andrew says.

IN Aussie, Calls for Reserve Bank as Peoples Bank as farm credit dries up

If RBNZ requires the banks to hold more capital they have two choices raise more capital or make farmers stump up, guess which pill they chose.

A few farmers might go bankrupt having taken on too much debt or over estimating revenue. Someone else will pick up the farm at a more realistic price and make a go of it.

Now now Nigel keep calm. We're way to far into the farm/house/land Ponzi scheme to back out now. It MUST go in.

nigelh - I don't want to sound cruel. But this process is exactly what the banks stopped happening through the low payout years possibly for fair of public perception of being bullies. They carried dairy farmers through with debt levels that were excessive and unable to be justified on financial returns.
So now the farmers with debt of over $35 kg ms (and how the hell can anyone justify that?) and largely multi farm owners are forcing unwanted negative attention on us all as a lending group.
At least two banks don't want any new dairy farmer clients so who is going to buy the farms that need to be sold? Not forestry, not foreigners, who?,

The banks had to suck it up back then as a cartel as if one bank pressured farmers to sell the value of farms would keel over, the equity the banks held would have dropped substantially and then they would have been forced to force sales...how would you hold back the tide. The banks would have lost a lot of money.