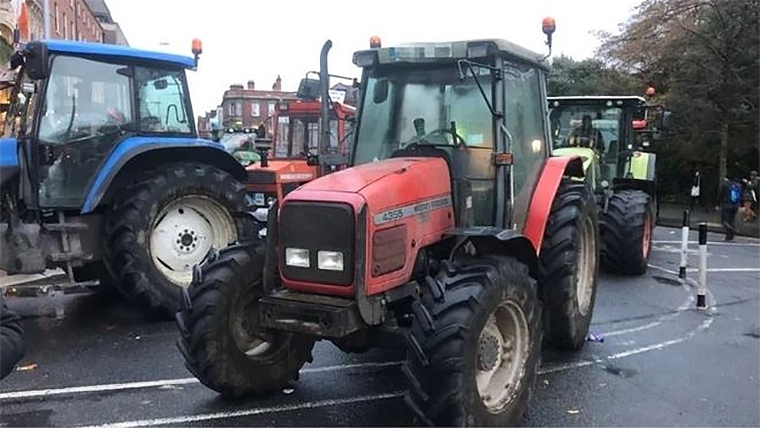 The anti-farming feeling that many in New Zealand are experiencing is widespread.

Let’s face it, there has been an endless barrage of negative comment aimed at livestock farming for at least five years now, and it is not only being experienced just here. French farmers, never known for being shy in expressing their feelings, are also feeling under the gun.

The streets of Paris have been rumbling to the beat of large tractors and the farmers bring their complaints to their Parliament. Farmers are unhappy with their revenues, increases in regulations and limitations on chemicals they are able to use and what they perceive as unfair competition.

In relation to 'competition', last year New Zealand began negotiations to lower tariffs on products going into EU and specifically to gain additional access to the EU for dairy products. Given the mood of the EU farmers, a successful outcome to getting more dairy access looks distinctly unlikely. Not only have the French been up in arms but the German and Irish farmers have been active also.

In Germany 10,000 farmers with 5,000 tractors drove into Berlin, and in Dublin farmers recently they shut down busy parts the city centre for a second successive day to protest against low beef prices and climate change initiatives they say unfairly target them.

Sticking with governments, one of the philosophical problems I have with successive New Zealand governments is the existence of LandCorp. It’s reason for being, when most government owned entities were being sold off to pay the bills in the 1980’s, was to supposedly provide a land bank for future Treaty of Waitangi Tribunal settlements - an admirable sentiment but not one I can recall seeing much traction on.

Just to remind readers of the scale of LandCorp, it holds 385,500 ha of land and that is worth $1.7 bln. It's a sizable asset. Actually, an asset is probably the wrong term, it better fits the bill of a liability due to it lack of ability to pay a dividend back to its shareholders (us the taxpayer). Back last August it announced an -$11 mln dollar loss blaming the drought for reduced earnings. It did manage to dredge up a one off payment of $5 mln as a result of the Yili payment to Westland Dairy shareholders (was there a drought in Westland last year?). National has said they would reduce LandCorp holdings and lease off land to incoming farmers, likely a far better model to show a profit and greatly reduce bureaucratic overheads.

What prompted me to look at what LandCorp are up to was the news that the Spring Sheep Dairy enterprise (a 50-50 LandCorp and private funded sheep dairying enterprise based in the Waikato and Taupo regions), set up with nearly $13 mln assistance from Government in 2016 are now looking to sell sheep milk into New Zealand supermarkets.

When Landcorp received the funding it was to encourage the new industry “increase the numbers of farms from the current half dozen to 55, and to lift annual revenues from $7.6 mln to between $200-$700 mln by 2020.”

Dairy sheep numbers back then were estimated to be around 25,000. Currently, they are sitting at more like 12,000. Not an indication of a thriving industry.

Through the media we have heard what a great job Spring Dairy have been doing expanding overseas markets and how successful the industry is going. If that is the case, why then are they selling their subsidised milk onto the New Zealand market creating yet a greater barrier to existing sheep dairy farmers?

As a South Island based farmer, we have seen zero benefit of the Governments spend, and now see potential threats. I know of North Island sheep dairy farmers who feel the same way.

LandCorp has a history of failing to perform and being a drag on the rest of the industry. Is sheep dairying going to suffer the same result?

The current plan to sell locally appears to be going in exactly the wrong direction. Given their hype, surely there are better profits to be made offshore. Or has that $13 mln subsididy been wasted already?

Perhaps Landcorp should take a leaf outta the LumberJack book, and plant them 3,855 sq kms in radiata, and 'harvest' the cashflow from the Carbon Credit Mine thus instantiated. Yes, it'd be Peter paying Paul, but in an NZ-wide context, that would grant indulgences for - oh, around 2 years' emissions......

.. the problem seems to be that productive land is locked up in radiata pines ... the aim being carbon sinks ... no lumber Jack needed... they'll have skip and jump, and press wild flowers somewhere else .. no buttered scones for tea ...

Most of the CoL's labourers couldn't find their way to the nearest airport on their own, so it's no surprise they're targeting the big bad farmer. The primary industries still account for way more than half of our offshore earnings - read real money - and yet are branded evil rural dwellers from their hold-ups within their air conditioned buildings in the big towns. I would have thought with the global population approaching 8 billion that growing more/better/more healthy/darn near anything food was the way forward for NZ Inc. Certainly the current govt (the children) don't seem to see it this way.

Apparently NZ produces enough food to sustain 40 million people .... we are a food basket ... and we ought to be processing more than we do , exporting higher quality produce , rather than a zillion tins per year of dried milk powder ...

I think we need to aim for a population of 40 million so we can eat all that food, think of how much GDP growth we will have.

If the government wanted to improve the bottom line, they should farm the head office out into the country.

As for selling more state assets, doesnt overseas interests already own too much?

Not if they plant it into forests, we need mor pine trees.

Selling 1.7 billion of real estate will surely boost GDP by a substantial margin according to the NZIER final sales method of GDP, unlike dairy farming which contributes nothing but water that isn't even fit for washing up.

It would be interesting to know if the lease farms north of Taupo have been profitable for Landcorp!

I bet they have been profitable for the owners. Lol.
Unbelievable. All that land and most years they make losses. Imagine if you put a bunch of young farmers in there with ownership as their goal. The liability called Landcorp or Pamu (you can change a name but that doesnt change the bottom line) would become a valuable part of the farmjng community.
The last govt had some good ideas for Landcorp. Shame Bill missed out. When you realise how many farm were broken in by Lands and Survey then sold to young kiwis who really made a go of it. What are they reduced to now...putting sheep milk on NZ market and ruining genuine kiwi farmers incomes. Shocking. But talk to deer cattle and sheep farmers who have to compete on a daily basis with this behemoth that can get deals with meat companies that we cant.