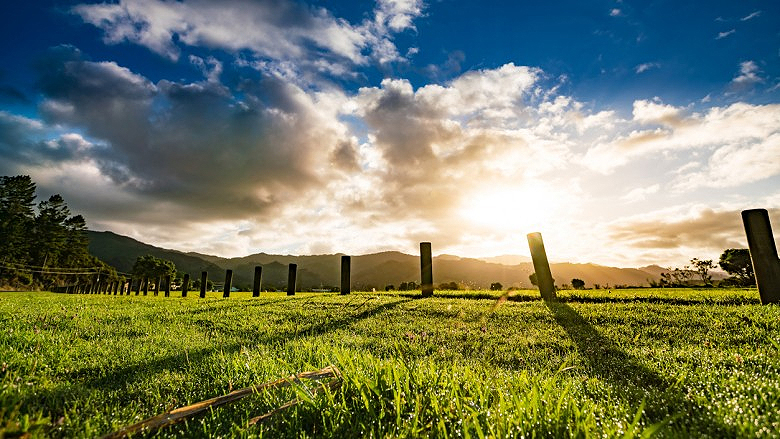 Farmers are feeling slightly more positive than they were six months ago but very few believe general economic conditions will improve in the year ahead, the Federated Farmers Mid-Season Farm Confidence Survey shows.

"Higher commodity prices are boosting farm incomes and there has been a slight rise in profitability expectations over the next 12 months. However, concern about regulation and compliance costs is unabated since our July survey," Feds economics and commerce spokesperson Andrew Hoggard said.

Nearly 1,500 farmers responded to the January survey conducted by Research First, and just on 46% of them expected economic conditions to worsen over the next 12 months. That’s a 5 percentage point decrease on the July survey finding and the first positive change in forward-looking expectations since that benchmark peaked in July 2017.

However, there was no change in the very small proportion of farmers who expected conditions to improve (4%). Just over 46% expected no change in economic conditions (up five percentage points).

"That negative sentiment, albeit slightly improved, is consistent with the findings of other recent business confidence surveys," Andrew said.

Compared to July last year, the proportion of farmers expecting their profitability to improve is up three points to 24%, and those expecting it to worsen is down 4 points to 21%.

"There’s a bit of buoyancy over sustained strong commodity prices generally and there’s a noticeable 9-point increase in the number of farmers who expect to reduce their debt over the next 12 months - no doubt in part due to the squeeze coming from banks," Andrew said.

The January survey showed regulation and compliance costs, especially in the environmental space which will likely impact farm production and the cost of doing business, remains the single greatest concern for farmers. Just over 20% of respondents selected it as their No. 1 concern.

Climate change policy and the ETS came in as the second greatest concern (17%) and in third place was a new worry - freshwater policy (11%).

"Everyone in the agricultural sector is wondering where the government is going to go with its final decisions on standards for protecting waterways. We’ve voiced our concerns loud and strong that if the initial impractical proposals floated last year are not tempered with a more targeted and practical approach, pastoral farming will become uneconomic in some area," Andrew said. 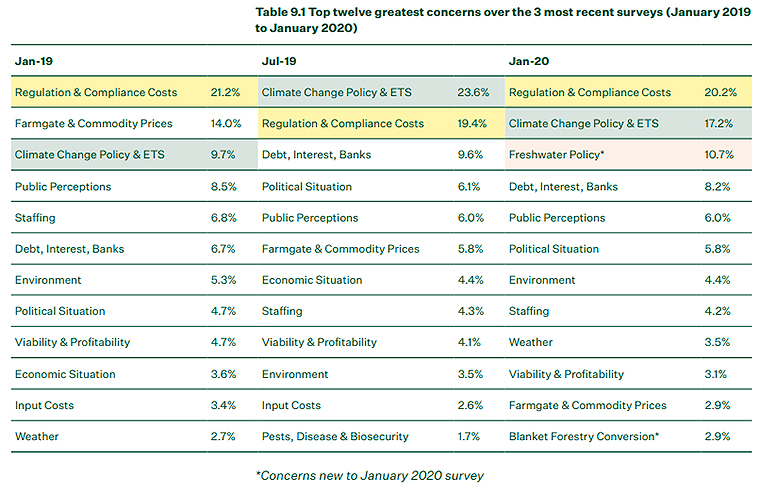 I am in a catchment that our regional council has decided we need consent to farm. It has met with resistance, so far only 10 farmers have even started the process the rest are basically refusing, farmers are going to resist, the regional council has underestimated the ill will. My catchment has issues with feed pads the regional council has refused to deal with and now they want us all under some bureaucratic umbrella that once started we know will never end.
The water quality around here is very poor due to these feed pads, I OIA requested the council for raw data, e-coli for safe swimming is under 260, this stream has highs of 570,000. The culprits are large farmers/corporates who somehow can get away with things the average farmer cannot.

AJ it seems that we just have to get used to the different observations of those who haven't got a clue about farming/horticulture and those who do.
NZ is becoming urbanised therefore fewer people who do have a clue.
MSM don't help, more often than not on the side of the urban liberals.
These liberals are becoming more vocal and belligerent whether they understand what they're spouting forth or not, it doesn't matter as they just know they're right.

Regarding carbon emissions, CO2 and CH4, have you seen these?
The Methane Mistake: NZ Carbon Emissions
and
The Methane Big Lie

Of course the MSM will never mention anything disproving this falsehood so farmers etc get the blame.

Meanwhile in the UK:
In the name of tackling climate change, the UK has become the largest importer of wood pellets in the world in just five years.
https://www.carbonbrief.org/investigation-does-the-uks-biomass-burning-h...

-----------
British power stations are burning wood from US forests – to meet renewables targets
https://theconversation.com/british-power-stations-are-burning-wood-from...
--------
The world is slowly going nuts.

I have a friend in the UK who heats his business with wood chips from a local woodlot. The process involves cutting down young trees and feeding them into a massive diesel powered chipper. The chips are then dried and fed into a large burner. It looked bonkers to me and i'm pretty sure he wishes he hadn't done it. The labour content is huge, diesel is way more than budgeted and he needs nearly twice the amount of wood chips he thought.
We live in a crazy world where things no longer have to make sense.

The issue in the UK is that Feed in Tariffs were offered by government for the electricity generated by wood boilers. A 7-8 year return on investment and then free money. You have situations where people heat old barns, leave windows & doors open etc. These boilers are run and max capacity to get max returns for electric generation - as you say, a crazy world!

Cronyism is the key. As long as you have enough fingers in a diverse range of pies, you can get away with murder. The ticket clipping council target the stand alone farmer, or any business owner for that matter, because they don't have the protection of the corporate setups.

AJ,ATM, YDB, if only I could disagree with you, just wish I could. The burgeoning corporatised bureaucracy in NZ is becoming a major threat to all of us and our way of life. The Brown Cardigan Brigade. Omne Auctoritatus Nihil Responsibilitas.