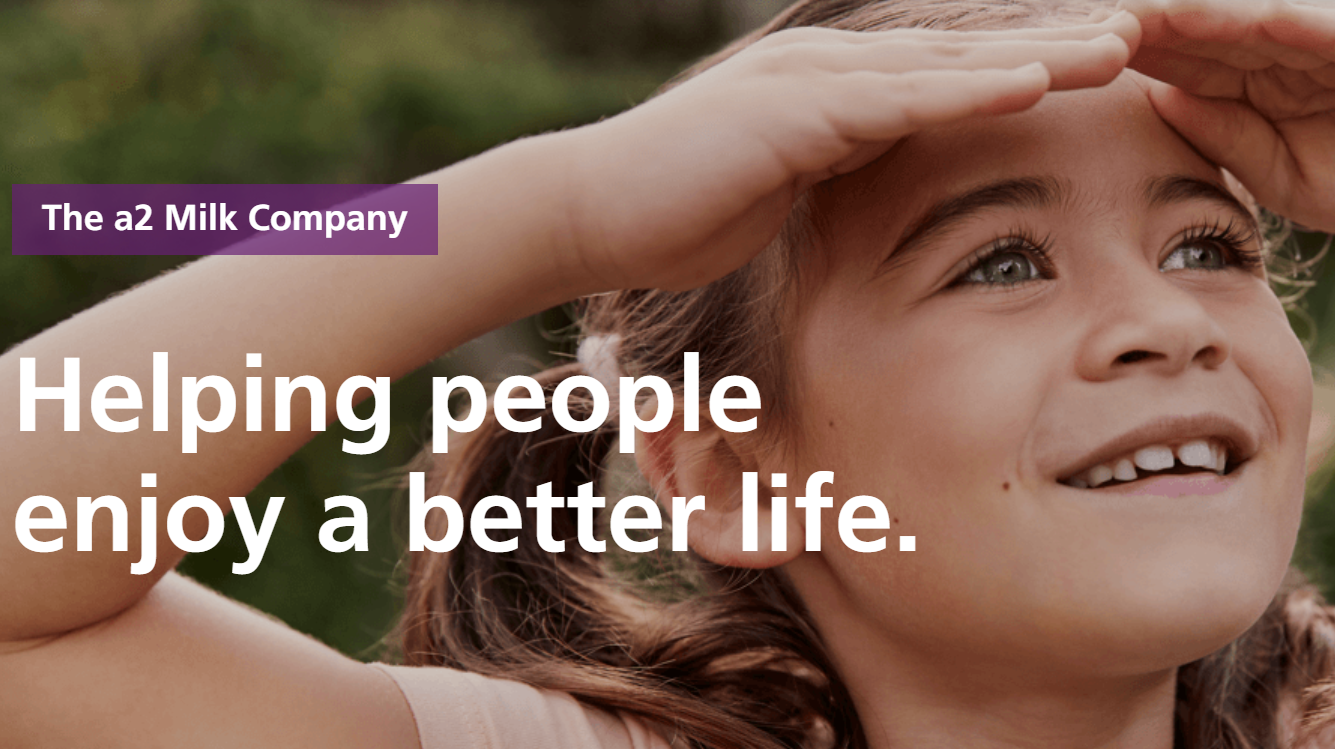 At times of crisis you look to leaders to deliver,... well, leadership - and maybe some good news to cheer people up.

And on Wednesday sharemarket darling the a2 Milk Company delivered in spades on its super-hyped name and produced a startling profit UPGRADE for the year to June 2020.

Based on the figures provided in the release by a2 it is now expecting that its operating earnings (earnings before interest, tax, depreciation and amortisation - ebitda) could be as much as $560 million, which would be a 35% improvement on the ebitda profit of $413.6 million in the year to June 2019.

a2 chief executive Geoffrey Babidge said in the update on Wednesday that since the half-year results announcement the company had continued to experience strong revenue growth across all key regions, particularly in respect of infant nutrition products sold in China and Australia.

"We are now able to confirm that our revenue for the three months to 31 March 2020 (3Q20) was above expectations. This primarily reflected the impact of changes in consumer purchase behaviour arising from the Covid-19 situation and included an increase in pantry stocking of our products particularly via online and reseller channels. We are unable to estimate the timing and extent to which pantry stocking may unwind," Babidge said.

"In addition, our China segment revenue, transacted in US dollars, was favourably impacted by a significant depreciation of the New Zealand dollar to the US dollar in the quarter."

He said given the Covid-19 situation, the outlook for both revenue and earnings remained uncertain. Furthermore, significant uncertainty remains around the potential impact on supply chains and consumer demand in our core markets and the resulting financial impact on our performance for the balance of the financial year.

He then went on to say, however that overall for the full year the company anticipated ongoing revenue growth across its key regions supported by increased levels of marketing investment in China and the US as well as, to the extent practicable in the current circumstances, the ongoing development of a2's organisational capability to support the execution of its strategy.

If the top figure was to be achieved that would be about a 34% improvement on the $1304.5 million revenue achieved by the company last year.

Babidge said the full year sales to operating earnings margin was now anticipated to be above that advised in February and in the range of 31% to 32%.

"This assumes that planned marketing activity for FY20 of $200 million, weighted to 2H20, will be fully expended prior to year-end."

Babidge said the profit margin in the second half of the year was expected to be higher than previously anticipated. primarily a result of:
• Higher revenue, and hence gross margin, from higher margin nutritional products, in part due to consumer pantry stocking in 3Q20 compared to expectations;
• Favourable impact arising from exchange rate movement in USD:NZD impacting on China segment revenue and earnings; and
• Lower than expected costs for travel, and other costs as a consequence of a delay in planned recruitment, due to Covid-19 restrictions.

"It is unlikely that these factors will be sustained as these unprecedented circumstances begin to unwind.

"Given the above, the board continues to consider it appropriate that the Company target an ebitda margin in the order of 30% in the medium-term. This assumes the market performance and mix of our products remains broadly consistent and the competitive environment evolves as anticipated. We will keep the balance between growth and investment under constant review."

Pantry stocking, impending worldwide recession. Even darlings of the stock market will have to have a breather in this environment.

Yesterday another breather for this F.IRE economy, LVR FHB deposit gone, it's never been a good time for NZ to quickly recapitulate the loss, re-visit the OZ banks for further RE loans. The positive outlook in this uncertain times is the full assurances to Real Estate industries by our neoliberal govt (both red & blue team), worldwide countries are now looking into NZ ruling elites every moves, on how to douse more petrol into the glimmer flame of it's properties market. NZ is expecting to open up border soon for those seeking stable RE sanctuary from turmoil of US & China - So? use that redundancy money, wages subsidy etc. to get any procurement means of NZ real estate, before end of this year the vaccine will be ready, border shall be re-open to welcome those foreign investment/people movement back here again. Spend spend spend, your RE new loan are already silently being supported/backed by the govt. & RBNZ - OZ Banks are waiting..for you.

Now would appear to be a good time to buy shares.

You mean recapitalise, or was recapitulate more accurate?
It seems that despite "Progressives" putting the boot in, when problems occur they actually support the system. To give them their dues, Labour have supported most industries (not equally - that would be impossible), not just Real Estate. Either it's right or wrong, and maybe we would all change something about how they've done it. Hindsight is a wonderful thing.
From your POV, should Labour just have let it all fall and pick up the pieces later?
Who will pay for that, and feed everyone when people aren't working and paying taxes, going broke?

When everybody is poor normal milk will suddenly suffice. Luxury items wither.

Yes amazing, market cap now approaching 15 billion. I had shares in this at 67 cents and sold out at $2.70, you have to laugh. I do have a bit of a question mark that if things get really tough will people still pay 50% more for their milk, but it does seem to digest better particularly with asians apparently. Great company for NZ.

A continental accent and kiwis go all bashful but I understand the toilets at Fonterra base camp now have small images of the cloggies stuck on the porcelain to help everyone's aim.

Any insight into the status of A2 in other dairy nations?

Any insight into the status of A2 in other dairy nations?

Wilco
Athoug I have advocated for A2 as a category for some 15 years, I certainly did not predict the current share price of $20 for ATM.
With around 70% of the shares in ATM now owned by overseas entities - it may actually be more than that now - there is no laughter from me. It continues to be the big differentiation option that the greater indsutry has still not grasped.
KeithW

There is still a growing awareness of how unnecessary bovine growth fluid is for humans. I had grown up drinking this and thinking it was normal for most of my life, without questioning the logic of it and despite being disgusted by the idea of consuming human breast milk past weaning. There are plenty of other issues surrounding dairy production that are being more heavily scrutinized these past years. I wouldn't look to it for a rosy future in the long term.

Billions of dollars invested in the synthetic milk industry would beg to differ.

Why of course. Billions of dollars have never been badly invested before.

WhenTrump nukes China for causing the virus will there be anybody remaining to drink milk?