New Zealand farmer confidence 'rose' in the second quarter of 2020, but remains in negative territory overall - with more of the country’s farmers pessimistic than optimistic about the year ahead: Rabobank

New Zealand farmer confidence 'rose' in the second quarter of 2020, but remains in negative territory overall - with more of the country’s farmers pessimistic than optimistic about the year ahead: Rabobank 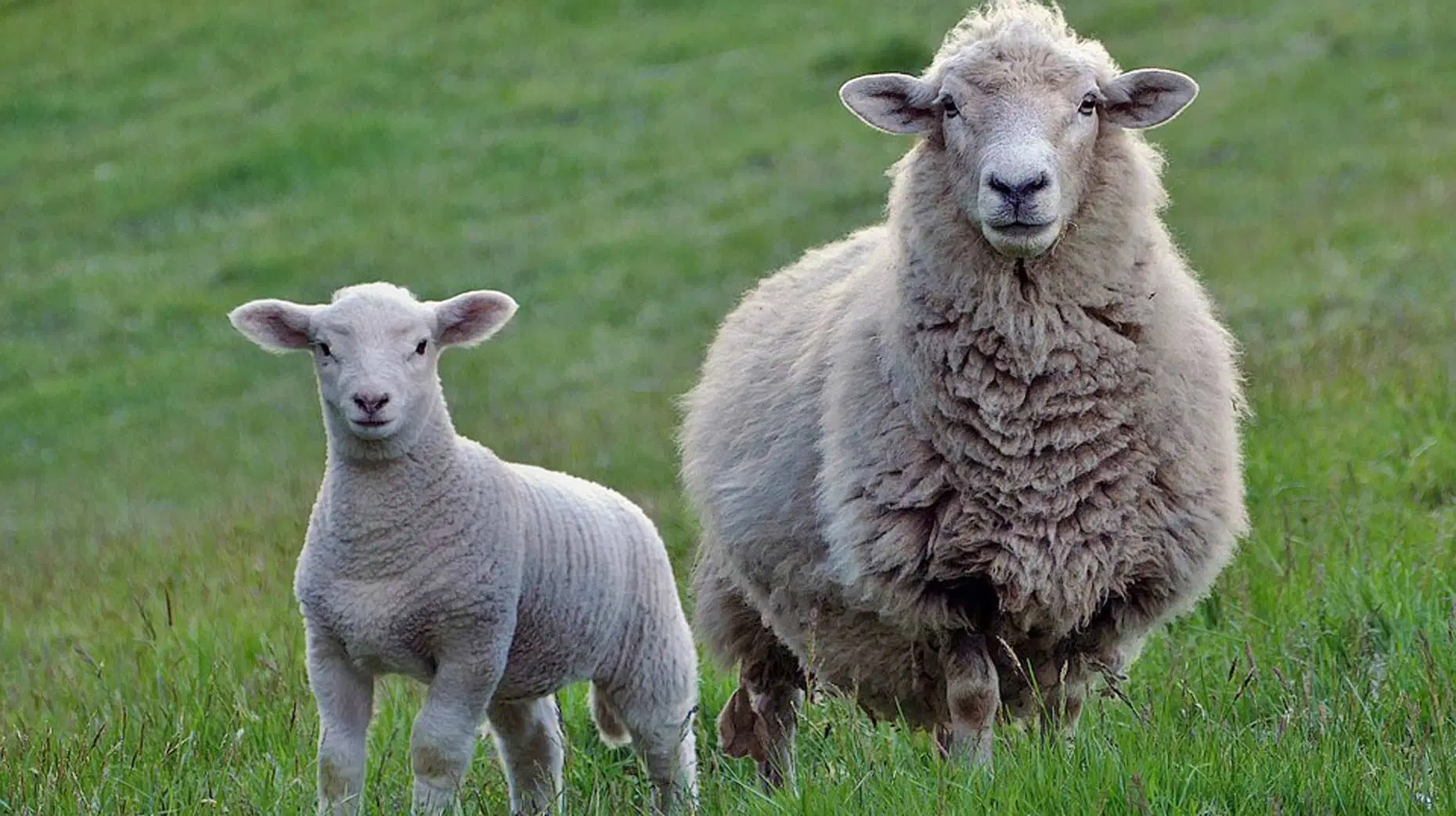 Following a sharp drop in March due to uncertainty created by Covid-19, agricultural sector confidence has rebounded strongly with fewer farmers now concerned about the impacts of the virus on the agricultural economy, the latest Rabobank Rural Confidence Survey has shown.

However, Covid-19 does continue to be a key source of anxiety among farmers and overall confidence remains deep in negative territory.

The second quarterly Rural Confidence Survey for the year – completed earlier this month – has shown the nation’s net farmer confidence has risen to -26 per cent, up from -44 per cent recorded in the first quarter of the year. The survey found an increase in the number of farmers expecting agricultural economic conditions to improve in the coming 12 months (up to 16 per cent from 12 per cent last quarter), while fewer New Zealand farmers were expecting the performance of the agricultural economy to worsen (42 per cent from 56 per cent last survey). The number of farmers expecting conditions to remain the same stood at 39 per cent, up from 29 per cent previously.

Covid-19 was cited as a key concern by 38 per cent of farmers with a pessimistic outlook for the agricultural economy this survey, well back on the 84 per cent in mid-March when the pandemic was taking hold across the globe.

“While most New Zealand farmers have been adversely impacted by Covid-19, the industry has done a fantastic job of coming together to lessen the extent of these impacts,” he said.

“Over recent months, we’ve seen the sector adjust quickly to the restrictions in place at various Covid-19 alert levels and this has enabled the country’s agricultural products to be processed at close-to-full capacity. We’ve also seen exporters acting swiftly to divert products into different markets and channels when demand has waned in others.

“This strong industry response has helped to mitigate some of the negative impacts of the virus and has played a key role in lifting farmer confidence from the near-record low we saw in March.”

“While many farmers remain anxious about Government policy, we’ve seen the percentage of farmers citing this as a reason for concern drop over recent quarters. In this survey, Government policy was identified as a concern by a quarter of those with a negative outlook, while back in December last year this figure reached a record high of 91 per cent,” he said.

“The recent changes to fresh water policy announced in early June are likely to be a key contributor to this drop, with these changes expected to reduce the overall costs faced by farmers.”

Among farmers who now have an optimistic outlook on the year ahead, 39 per cent nominated increasing demand as a key reason for holding this view, while 18 per cent credited rising commodity prices.

“In this survey there were also a significant number of verbatim responses from farmers flagging the country’s increased economic reliance on agriculture and general public appreciation for the industry as a key reason for optimism,” Mr Charteris said.

Mr Charteris said sheep and beef farmers were more optimistic about the prospects for their own businesses than earlier in the year.

“Beef and lamb pricing has certainly come back over the last quarter, but is still holding up reasonably well compared to where prices are normally sitting at this stage in the season. And this is likely to be one of the key factors in these higher expectations among sheep and beef farmers,” he said.

Conversely, Mr Charteris said, dairy farmers and horticulturalists were now more pessimistic about the prospects for their own businesses.

“Dairy farmers are facing a significant fall in pricing for their products with Fonterra recently announcing a wide pay out range of $5.40kg/MS to $6.90kg/MS for the 20/21 season that – even at the top end – is well back on the 19/20 season pay out,” he said.

“Prices for horticultural products, such as apples and kiwifruit, have been resilient early in the export year, however, lower confidence among growers is being driven by concerns about the impact of Covid-19 on demand over the coming months.”

“Thirty two per cent of horticulturalists were intending to increase investment in the coming 12 months, while only 11 per cent were expecting it to decrease.” 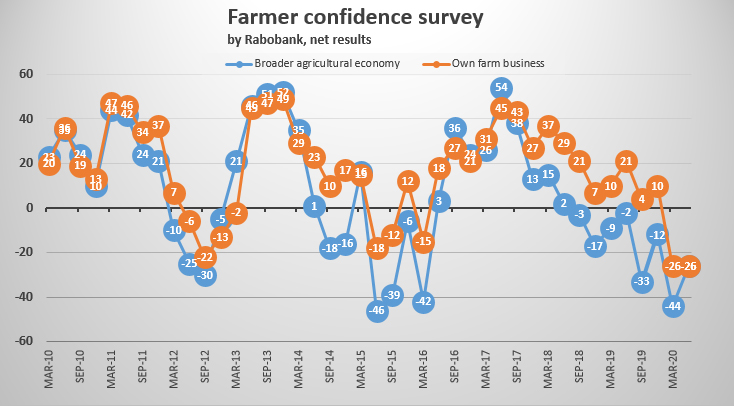 Not sure but is Fonterra’s export product still largely classified as commodity. That in a severe downturn is not necessarily disadvantageous. The high end ready retail and H & R products retreats from the market much sooner, much quicker for obvious reasons. Yet basic protein is always going to needed for the everyday average consumer. In other words a bottle of milk will do in place of, and go further, than a pottle of yoghurt in times of need.

Well, I would have to disagree with that; the top end consumers will have the money to buy the high end stuff, and while I agree with you that basic protein is always going to be needed for the everyday average consumer, unfortunately the everyday average consumer doesn't have the money at the moment, and they are generally getting poorer.
NZ produces 2% of the worlds food - we want to sell it to the rich to make some $$$$ not flog it in bulk to the poor buggers :-/

An indicator from many of our farmers contributors here. From mid March the processors virtually ceased purchase of prime steer grades and increased demand for manufacturing grades ie grinding meat.

Really difficult to know how the up coming season will pan out. I have not much confidence of picking the prices for beef and lamb in the coming six months. Currently lamb is close to $7 and beef at $4.70 or so. Lamb seems up due to lack of supply rather than strong demand. Mutton at around $5 is strong on the back of Chinese demand. But to uncertainties of the food service sector due to Covid will surely keep a lid on prices. On the other hand the store market is very strong with regions coming out of drought. Those who are stocked up with weaner beef and other store stock should do well if they sell on the store market to those recovering from drought. The problem those farmers have is you can’t make money without animals, so I suggest margins will be tight.
Wool on the other hand is a sad story. I’ve had to take a cut in my contract price for fine wool and will probably be back around $30 to $40 thousand especially when my non contract wool is being hit by half. It must be demoralising for those with crossbred wool.
I still remain optimistic but will be sharpening the knife to a few expenses, and will be looking to grow more grass to sell as supplement, as feed reserves will need restocking for many next season.

Well and truly in the off season for lamb, but if you have quality stock, suitable for chilled airfreight, you should deservedly get a premium.

It will be interesting come November for lamb, in the last 5 years there has normally been a huge fight to procure lamb to supply the British market and airfreight it over. It has been a big challenge to procure the lamb then as most of the early country has gone into other production, as well as increasing lambing percentages making for fewer large single lambs that are ready early. Will that market have any strength this season?

I am well out of touch now but traditionally the chilled lamb market trend for Europe has been a third each for Easter, Xmas and in between. The UK supermarkets demanded and got an extremely good product out of NZ, they and the consumer recognised and trusted it as a speciality and as well of course Xmas/Easter embraces the off season there. But there are two new runners on the field, Brexit and CV19. UK lamb on the continent may be substituted by Irish lamb due to the current EU merry go round being scuttled by Brexit. Chilled NZ lamb is not cheap especially by airfreight, and sea freight is tight for shelf life, how much spending power will CV19 suck out of the consumers. We used to say every season is different. This next one looks to be more different than any aforegoing.