Guy Trafford welcomes the new focus on encouraging employment in the agricultural sector, but he finds very mixed signals especially from Government agencies, and is a sector starting this new search with some major handicaps

Guy Trafford welcomes the new focus on encouraging employment in the agricultural sector, but he finds very mixed signals especially from Government agencies, and is a sector starting this new search with some major handicaps 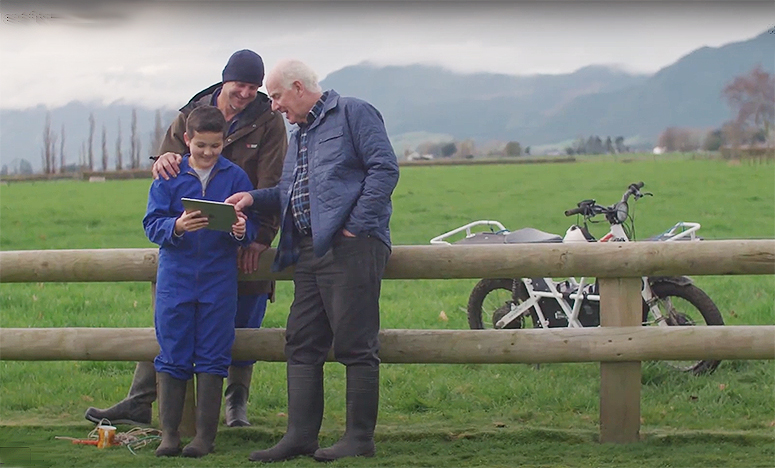 The Government action to encourage more kiwis and others to move into agriculturally based jobs is being welcomed by all sectors involved with the land.

Lincoln University has also made a positive, if somewhat overdue, move to help by recognising students who spend time working with/for contractors being allowed to count this work for their “prac work” components of their degrees and diplomas.

One of the strengths of the Lincoln qualifications is the incorporation of practical work. This has been long recognised by employers with Lincoln having a high (the highest) percentage of students who are recorded as being in their recognised career area three years after graduation. Unfortunately, this recognition has not extended into some of the current courses being taught with a continuation of field trips and tours being suspended. Last semester this cessation of tours etc was understandable due to the presence of COVID-19. However, it appears that the savings to the budgets has made what which was meant to be only a temporary measure, found to be attractive to the bean counters. Field trips and tours have been a burr under the saddle for a number of years, it is understandable that costs are an issue, but tours and field trips have always been an important component of the applied courses.

These courses do not have the sunk cost of labs which more technically bases courses require but rely upon the generosity of farmers and other business owners to provide real life case studies which allows students to see how these businesses operate.

Over the years the role of these teaching tools have been reduced due to, either the increasing students numbers in classes making meaningful supervision difficult at a time with reduction in staff support and with pressure to reduce costs. However, as student leave the university and provide leaving comments one of the common threads running through has been how they have valued the incorporation of practical components into courses. This positive feedback is also recognised by ‘experts’ as one of the better ways to teach students. The “prac work” mentioned earlier relates to up to 13 weeks spent over the summer break, usually as paid work done in none teaching time and apart from some organising of placements and allocating and payment of marking of projects, the university incurs little cost. If things are still as they were a couple of years back 39 weeks of supervised practical works was required to be done for the B.Com Ag which has been the flagship for degrees incorporating practical experience into a degree. And the other ‘ag’ courses also have a significant component.

So, for the sake of future students, one can only hope that action matches the rhetoric about reinstating tours and field trips in the future. Without them, some degrees will fade into a shadow of them previous selves and no doubt this will reduce student intakes which really will impact upon university income.

The Government alluded, under its “Five Point Plan”, that it wanted to increase jobs in the agricultural sector. This week they have put a bit more structure around the aims with its Opportunity Grows Here – a website and marketing campaign funded through Budget 2020 - to attract 10,000 New Zealanders into food and fibre jobs over four years. 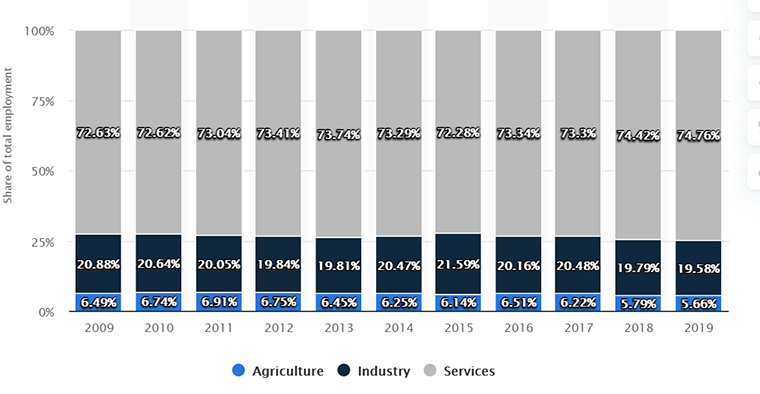 So, positive yes, but let’s not get too carried away with just how ambitious this is (or isn’t) especially as it is spread over four years. Hopefully what this initiative signals is recognition that agriculture is important but, when past trends are looked at, the 10,000 may be more difficult to achieve than the (low) numbers indicate.

Since 2011 the percentage of workers involved in agriculture has dropped from 6.91% roughly a 20% drop. This means the 10,000 will not replace the decline over ten years. The reduction in farm staff trend is common throughout the globe and should come as no surprise. The amalgamation of farms and the improved labour saving technologies post farm all point to reduction in staff numbers. The graph also shows that “Industry” which is the other ‘productive’ sector, is also showing a decline as a percentage of the total work force.

Much of the declines may be attributed to the growth of “Services”, which will include hospitality and we will see some sort of turn around because of the current decline in this sector and much of the source of “new entrants” into both agriculture and industry will come from here. Having a quick look online as to where the jobs in the primary sector are, it quickly become apparent that dairy farming is where the most (advertised) need is. I only went through 5 of 50 pages of ads (1,205 ads in total at time of looking) and by far and away the majority of jobs were associated with dairying, followed by generic forestry ads with others well in the distance. The government sponsored programme “Opportunity Grows Here “ takes you to Trade Me’s farming employment page with 224 job entries and it does provide a more balance of areas of work although Dairying still has its head in front for seeking staff.

Given the determination it appears government has to reduce dairying’s foot print within New Zealand when it is removed from the job opportunities the list does diminish quite quickly.

Another observation of the “Opportunity Grows Here” site is the disparity of incomes quoted. Unfortunately, of the six sectors covered all have aspirational incomes of well into the 6 figure territory, except for Sheep and Beef and Dairy.

If a school leaver or job shifter was looking at the site for signals as where to head if they include potential income as an important component of career choice, then the  Sheep and Beef and Dairy industries need to think a bit more creatively if they wish to attract new entrants. We know such jobs exist, however they are missing in this presentation.

Forestry, Fishing and Aquaculture and Horticulture have a far broader and arguably more holistc approach in their presentations which are likely to appeal to a greater audience.

An essential aspect of the practical field trips and holiday work is that it is a sorting process. If a student truly does not have 'stock sense' - a hard-to-establish metric in the classroom - it will become apparent on such a trip or placement. And this is only one example of the 'senses' needed for a successful niche in Ag. From the students' POV, it is also vital to the career decision: better to have a placement that unequivocally shows unsuitability for a proposed job trajectory, than to struggle on, round peg in square hole......