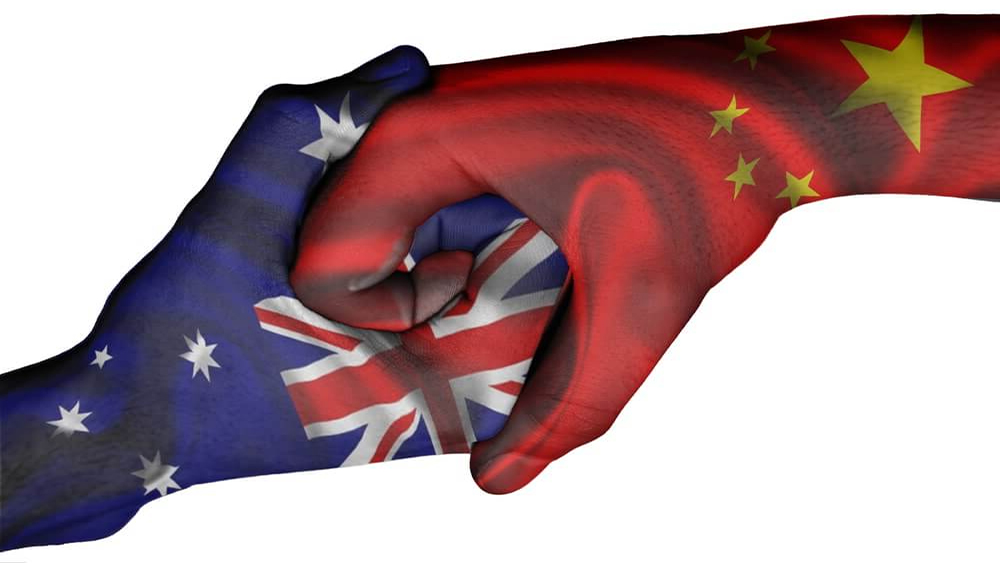 Along with the lift in the latest Global Dairy Trade (GDT) results which was largely supported by China, a recent summary viewed of the details of the Australian versus China stoush brought home the precariousness of trade with China.

New Zealand is managing to negotiate its way through trade politics successfully and our looser relationship with the USA probably counts in our favour for a change, at least until Trump gets pushed aside. One thing New Zealand seems to be good at is not letting inflated egos get in the road of good sense.

China certainly seems to have one along with the USA, and arguably the same could be said regarding Australia.

If anyone is wondering why this impasse might be considered important, these are our two largest trading partners and Australia is (still) our closest neighbour in all senses of the word. Also if Australia gets increasingly shut out of China then it will be forced to move products into other markets and potentially upset the advantages that may exist for New Zealand exporters who are already there, although it may further reveal opportunities in China.

The risk is however, that it may put yet more ‘apples into the one basket’.

The latest move between Australia and China, is China telling the Aussie government that it considers Australia to blame for the deterioration in relations, and it expects Australia to make the first move in repairing the situation. Unfortunately, such a move from Australia appears unlikely at the moment, given the reportedly strong anti-China sentiment that exists in Australia.

Below is a timeline (compliments of the South China Morning Post).

•    17 February, 2020 The commission initiates anti-dumping investigation against China, looking at the sales of aluminium micro-extrusions, which are used for domestic window flyscreens and television aerials, made by Chinese companies Guangdong Jiangshen Aluminium and Guangdong Zhongya Aluminium

•    16 April, 2020 The commission initiates another anti-dumping investigation into A4 copy paper exported by China, Brazil, Indonesia and Thailand

•    13 May, 2020 Australian Dumping Commission concludes, following a review, it will continue to impose anti-dumping duties on Chinese silicon metal

•    18 May, 2020 China confirms 80.5% tariff on Australian barley exports following the conclusion of its anti-dumping investigations

•    27 May, 2020 Australian initiates an anti-dumping investigation into painted steel strapping from China and Vietnam

•    18 August, 2020 China’s Ministry of Commerce confirms it has started an anti-dumping investigation into Australian wine imports following a complaint from the China Alcoholic Drinks Association

Given the length of grievances alleged by both parties and the lack of any progress the utilisation of a third party to bring a more dispassionate approach to resolving the issues would seem appropriate. The recently signed RCEP by both parties (and 13 others including New Zealand) which is a rule based approach to trading may be useful but given the length of time involved getting to this stage in the RCEP and no real improvement between Australia and China this is unlikely.

The WTO is meant to be the organisation setup to settle exactly these sorts of problems, but with Trump’s undermining of it, the WTO is unlikely to have the credibility or horsepower to sort things out.

How Australia extracts itself out of the situation and not loses face is difficult to see. But sense would say that the Aussies need China more than China needs them, so the ball is definitely in their court.

New Zealand meat exporters to China should also be getting a little concerned. As can be seen below, the price of pork in China has plummeted back to pre ASF levels due to record imports and the (slow) recovery of the domestic pig herd. 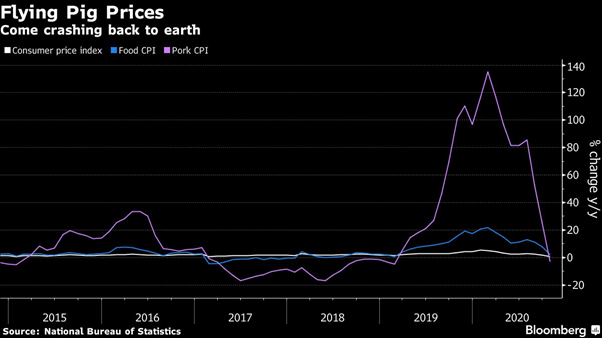 This is likely to put downward pressure on the pork substitutes that has been one of the reasons for New Zealand farmers sheep and beef prices maintaining reasonable levels.

At the moment sheep schedules are holding and only prime beef is on a downward trend. Venison has been the biggest loser with some heavy trimming of the schedule over the last month to the point where it is considerably below lamb on a per kg basis but this is more due to the European situation rather than China which takes small amounts.

Guy
This is a useful perspective, although the South China Morning Post is not telling the whole story. And I think you are totally correct in sugggesting that Australia will have to move first if repair is to occur. Things have not been going particularly well for Australia-China relations for quite some time, and then came the comments from Australia about the coronavirus which were taken as deeply offensve by the Chinese. The Chinese have been much more offended by Scott Morrison than by anything that Donald Trump has ever said. Many countries have deep unease in relation to some behaviours of the Chinese Government, particularly in relation to a range of non COVID issues, but none that I can indentify have offended China in the way that Australia has.
In relaiton to NZ-China relations, the key product that China wants from New Zealand is milk powder. There are no other suppliers in the short term. Almost everything else we export to China they can get elsewhere. Given that they are 300 times bigger than us, it would be a reasonable assumption that they are more important to us than we are to them. As a nation, we should reflect on what it was that Australia said that caused such deep offence, and why it caused a greater reaction than in relation to anything that Donald Trump said. International relations can be somewhat tricky when there are elephants trampling arond and you are just a little flightless bird.
KeithW

As they say 'no matter whether the elephants make love or war, the grass underfoot gets trampled'

The larger picture is either ignored or not understood. China imports approx 30% of its food and has some of the best farmland producing 2 sometimes 3 crops a year. The 3 Gorges dam is the worlds largest and is current close to dangers level,there has already been significant flooding and damage due to the necessary release of huge amounts of water eg 46,000 cu mecs and there is evidence of cracks in the dam wall and undermining of the base. If the dam fails the damage down stream were some 400 million Chinese live will be catastrophic and china will require massive assistance especially food and of the large producers USA?\/CANADA in big conflict , Argentina has huge economic issues so may no longer have the capacity and Brazil has major covid problems and overall food production is lower due to the effects of Covid and adverse weather. Russia has had a good harvest but with Xi Jiping claiming that Vladivostock should be returned to China plus half of Kyrgistan I doubt Vladimir will be very cooperative and supply may come at a high price, China does have good relations with North Korea and Iran but I doubt either will be any use. NZ media has failed to even mention any of this so I am unsurprised that few people know any of the above, ignorance may be bliss until the reality strikes and combined with the Financial storm clouds gathering the world may experiencea perfect stomr and it willl be ugly

New Zealand is regarded as a beautiful, safe, tranquil, and geopolitical neutral country with down to earth people by Chinese people who see NZ on TV, TikTok or visited or studies in NZ in person.

NZ is regarded as a little good friend by China whereas the attitude toward the AUS changed from a not-bad-guy to the US's woofing and biting watch dog.

The “Little Friend” has principles, you should know
https://www.reuters.com/article/us-hongkong-security-statement/five-eyes...

Here is the question for you:

would anyone insist on splitting New Zealand into two or multiple independent countries will be allowed to work in the parliament?

For example, hypothetically I gathered many supporters and created riots to split Auckland from New Zealand and claimed its independence of New Zealand. What would New Zealand were going to do then?

Poor analogy. China was handed back Hong Kong, which is fair enough considering colonial backstory. But it was all agreed well in advance. It was also agreed the terms of said handing back. The CCP hasn’t honoured those terms. But that’s to be expected from fascist regimes.

The CCP can have Auckland I reckon. We've inadvertently stacked it with Indians, not a traditional friend of China. We'll just stock up on popcorn and sit back and watch. Oh a good few other ethnicities in the mix of things also just to make life interesting.

Ahhh, that's nice to know. Perhaps if we always tow the line and kowtow for eternity China won't invade us.

Your government are wusses, very very soft, a bunch of cry babies. Can't handle any criticism.
If your country was truly great they wouldn't even worry if a small country like Australia criticized them.

Wow, more social credits for you. This is propaganda pure and simple. I really hope the editors of this website have properly investigated your background.

The generally brash and loud Australians (note there is a similarity to US) certainly need to examine their priorities, especially now that it looks possible a new US administration may well leave them stranded and "holding the baby". The Chinese are hardly going to take kindly to being "stabbed in the back" verbally - nor should they. Time for Australia to work out which side of the bread they want to hit the carpet.
We should also remember Australia has been less than friendly in its dealings with us or our expats over there - hardly equal treatment when compared to how we treat their expats here.

It's high time Australia quit with the attitude that they are the proxy version of the US in the South Pacific. They aren't and never have been.

So asking for an investigation into the cause of Covid is offensive? Too bloody bad! China have wrecked the world economy and a full and fair investigation is needed.

Exactly. Good on Aus, they have backbone and we don't.

Pray tell, what are these putative principles that Australia cherishes that would prevent it from trading with China? The Australians should head Hillary Clinton’s view said that Chinese human rights are secondary to economic survival, especially are they are terribly dependent on China. Also, who are the Australians to lecture the Chinese on anything?

There does come a point when principles absolutely should rule, it is knowing when that is

The NZ education sector is still signing up partnerships with Chinese universities giving access to our education and research sectors. The NZ Govt encourages this to alleviate their funding commitments.
Would NZers have concerns if they knew all the partnerships and ownership structures given Chinas human rights and IP behaviour? And NZ security concerns?