We look like we have a La Niña weather pattern settling in and that is not all bad for New Zealand agriculture. Guy Trafford reviews the likely impacts

Rural News
We look like we have a La Niña weather pattern settling in and that is not all bad for New Zealand agriculture. Guy Trafford reviews the likely impacts 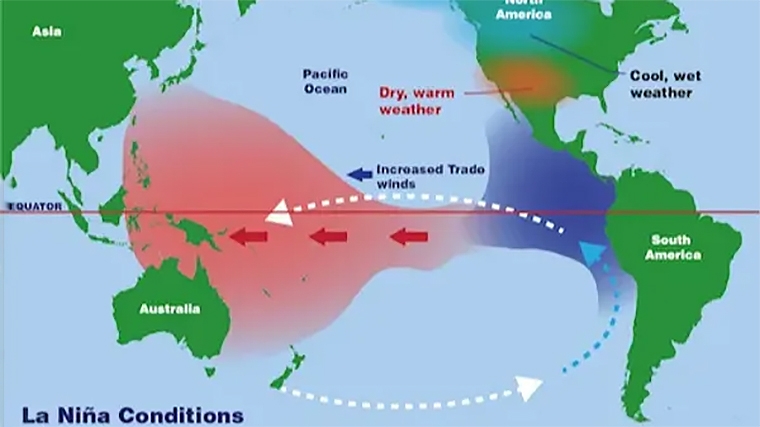 There was a recent announcement from the Minister of Primary Industries that there would be an increase in funding to support for farmers. Damien O’Connor said; “I have been closely monitoring the situation with officials and we have decided to allocate more than $350,000 to extend feed planning and coordination services until 30 June 2021”.

Two things from the announcement leapt out at me. The first was the underwhelming amount. If farmers are in real need of support, then $350,000 is not going to go far enough to be of any real help.

The other was that he said his concern was led by the influence of the increasing La Niña weather pattern. Admittedly I have spent most of my farming career on the eastern regions in both Islands but I had a little saying to myself to remind which weather pattern was the one to make me more anxious; La for lovely, El for hell.

Obviously, this does not apply to all parts of the country and the southern and eastern parts can suffer under a La Niña conditions. However, the most extreme droughts that I’m aware of have occurred on the eastern and northern regions largely took place in El Niño years.

Trawling through the web to find information to confirm that I was right in this attitude I came up with several pieces of information. One telling piece was an article published in Interest.co.nz back in 2012 which shows the agricultural GDP in relation to the Southern Oscillation Index (SOI). To clarify, negative SOI is when El Niño is occurring. While the match is not perfect, i.e. the 2004-2006 period bucks the trend it does show something is going on. 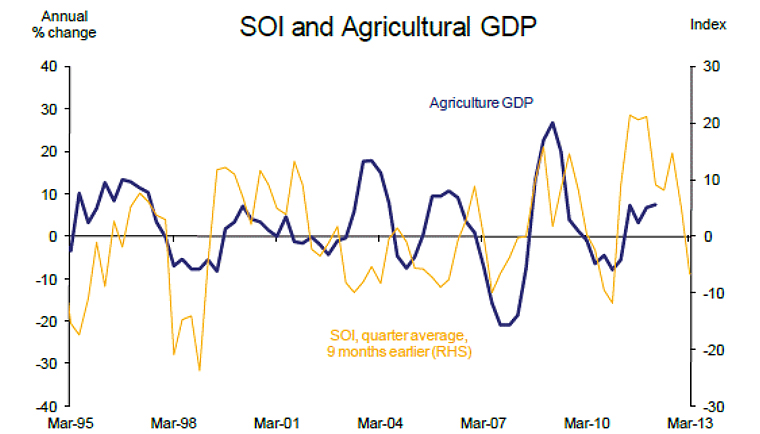 A NIWA definition is below with what the general trends are from the different status of the SOI.

In New Zealand, a La Niña phase may lead to fewer westerly winds and more north-easterly winds. This can cause more rain in north-eastern parts of the North Island and less rain to the south and southwest of the South Island. Warmer temperatures may also occur across the country. Mean sea level can increase during a La Niña phase. However, this relationship is highly variable.

Below are a map series showing the average effect of the different scenarios. NIWA did say that although both “account for less than 25 percent of the year-to year variance in seasonal rainfall and temperature at most locations. Nevertheless, its effects can be significant”. This is because the worse drought affected parts of the country are normally already in a negative moisture situation in summer and often autumn and the added dryness plus extra wind really compound the situation. 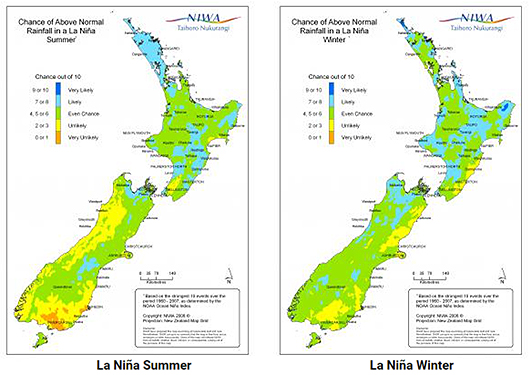 As can been seen in the lower maps Southland can also be affected in a La Niña, but for most years it is a relative thing (they may disagree).

So, the announcement from the Minister came as raising more questions than answers. It’s too mean to be seen as ‘buying favours’ and while La Niña can bring extreme rainfall events they tend to be localised (Bola being an exception). Hopefully, I haven’t risked incurring ‘Murphy’s law’ on the agricultural community, but we don’t have long to wait and see.

What is a bit more disturbing is the MIA report that shows that red meat sales are down year on year for the month of October by -18%. Sheep meat down -25% and beef down -14%. Despite the support the red meat trade has been getting from China this year October values there had fallen -36%. It still was the second-best years trade to China with last year’s largely supported by the influence of ASF which is now greatly reduced. Perhaps ironically the USA trade was up by +15%.

The final comment goes to CEO of MIA Sirma Karapeeva, “COVID-19 continues to severely disrupt our markets and key channels such as the food service sector and we expect this to continue through to 2021. The situation is also compounded by congestion issues at ports and the appreciation of the New Zealand dollar.”

350k??? It would have cost them more than that to just produce the policy piece and announce it! What a pathetic token gesture...

With 17 years of rainfall records I find each year as unpredictable as the next still. La nina and el nino can be very wet or very dry to us in the central plateau. Those maps are very interesting. Breaking down the LN or EL to strength in a particular season rather than an annual phenomenon looks to give a better idea of potential rainfall. The last few years the incredible unrelenting heat over the summer months has become quite scary. And with marine temps up, yet again it looks like another very hot summer.

Agree about marine temp increase. What I get concerned about is the strength of the wind - if it's hot and windy at the same time it just sucks all the moisture out of the soil.

Yes the wind last year was ferocious and unrelenting. It sucked the life out of the pasture very quickly. Unusually it was very windy last january.

Interesting about the temperature. Here last season it was hot but not overly intense summer and dry but we still remained realitively green. But we grew bugger all grass from January to end of may. The previous year was intensely hot in February, most days 30plus deg and the farm browned off totally. But over the same five months we grew way more grass, approx 20% more milk solids and 50% better grass cover at 1/6.
Bloody farming, it's never simple.

I think we are due a cyclone or 2 this summer. Unless those huge highs from Australia block them out like the last 2 years,
My real fear is long term changes in ground water or water table levels. After 2 droughts , any rain just seem s to soak away .

The government is aware that farmers consider themselves to be unfairly targeted with respect to freshwater reforms and greenhouse gas emissions. Else where govt has announced financial assistance for farmers to formulate farm environment plans. These plans are a govt imposition ie if the govt withdrew the requirement there would be no need for financial assistance.