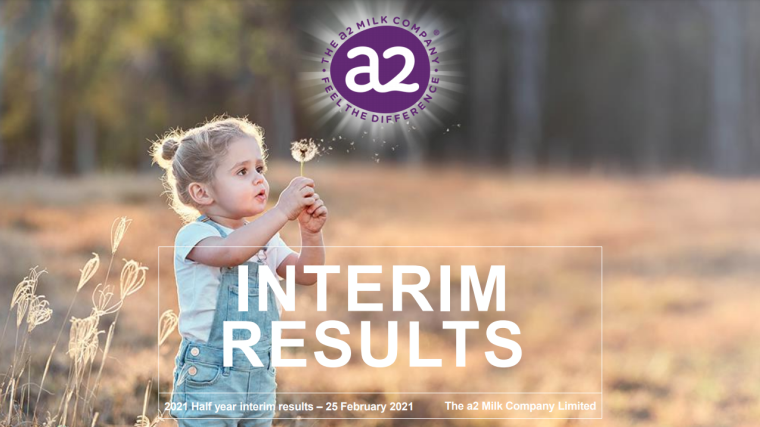 When the sharemarket falls out of love with you, it can be cruel.

One-time darling of the stock exchange a2 Milk Corp saw its shares savaged on the NZX on Thursday, with the price at time of writing down a whopping 17% to $9.24.

The fall followed the company announcing that after-tax profit for the half-year to December was down some 35% to $120 million, compared with $184.9 million for the same period a year earlier.

However, the main driver of the big plunge in the share price was most likely a second downgrade in two months in expected earnings for the full year after a substantial downgrade as recently as late December.

Essentially the problem for the company is with its selling channels - some of which are quite informal in nature - into China and the way these have been disrupted by Covid.

In late September 2020  the company was forecasting revenues for the full year of as much as $1.9 billion. In December the possible maximum revenue target was sliced to $1.55 billion and now it's been dropped to $1.4 billion.

Operating earnings targets as a share of revenue have been coming down too. In December the projected operating margin was dropped from an earlier anticipated 31%, to between 26% and 29% and now its been cut further to between 24% and 26%.

To put that into more meaningful language, comparing the bottom of the range 24% operating margin with the 29% top of the range in December gives a drop in operating earnings of over $30 million.

And the company says the latest outlook for full year assumes the actions being taken to re-activate the reseller channel into China delivers "a significant improvement in quarter-on-quarter growth from 3Q21 to 4Q21".

Its actually its third downgrade (it downgraded in Sept and again in Dec), and by the looks of things its setting itself up for a 4th downgrade in a few months when the daigou channel is still closed, and their CBEC channel is still underperforming. What is more worrying is that they don't seem to understand why both these channels are under performing, and a hint to management, its not just because of Covid. There are structural, demographic, and consumer behaviour shifts going on in China that the company is simply not seeing (or not mentioning).

There are many. I could literally write an essay. However, the main one is that there is a shift away from daigou - it has been widely reported that even the daigou still in Australia last year were not getting any orders. If the problem were simply one of not enough daigou in Australia due to closed borders, you would have expected that in-country daigou and corporate daigou would be picking up those orders, but this is not the case. Its not a lack of daigou that is the problem, its the lack of demand for daigou. The reason is the same reason why the CBEC channel is underperforming. Tmall and JD.com are losing market share to social ecommerce players, and A2 refuses to sell on those platforms (I understand why, but I also know how they can resolve that channel conflict. I'm waiting for A2 to figure it out as well).
A very prescient quote from Jeremy Hunt back in Nov. "[I am] skeptical that infant formula company a2 Milk will survive using e-commerce as it is not active on any platforms.
https://www.dailymail.co.uk/news/article-8945533/Asian-shoppers-raided-…

All their competitors now have A2 milk formulas, and are selling direct to Chinese consumers on social commerce platforms. Local brands have upped their game and are gaining market share, also through those social commerce channels. The list goes on.

I agree that the changed daigou behaviours are not only because of COVID. There are deeper things going on.
KeithW

How often does it happen that when a company is flavor of the month (or year, or -), it is about to take a serious tumble.

A successful share market investor and author, Mark Minervini, has stated that there is a 80% chance that a high flyer growth company will lose 50% of its share value, and a 50% chance that it will lose 80% of its value. So this is entirely expected. The same will happen to companies like Afterpay one day - the trick is to make your money and get out, and not be so wedded to your investment that you blindly give back all your profits, and more, to the market. As Kenny Rogers said, you have to "know when to fold em".

The other saying is that you always sell when there is a little bit there for the next investor.
On the other hand how often do you see shares that go on and on increasing - CSL, and it is often hard to time the market.
I think that the point is that have to to keep a clear view of whether they are still a good company with plenty of growth left. Underweight when the prices are too high. (i struggle with that) and use low prices as an opportunity to buy more.

Where do you see the good value point in A2 being?