Guy Trafford watches the issues farms have to deal with where the property has a road frontage. He also sees a loss of Canterbury's rural trees, much of it because Councils cashed up - and then reneged on replanting promises

Rural News
Guy Trafford watches the issues farms have to deal with where the property has a road frontage. He also sees a loss of Canterbury's rural trees, much of it because Councils cashed up - and then reneged on replanting promises 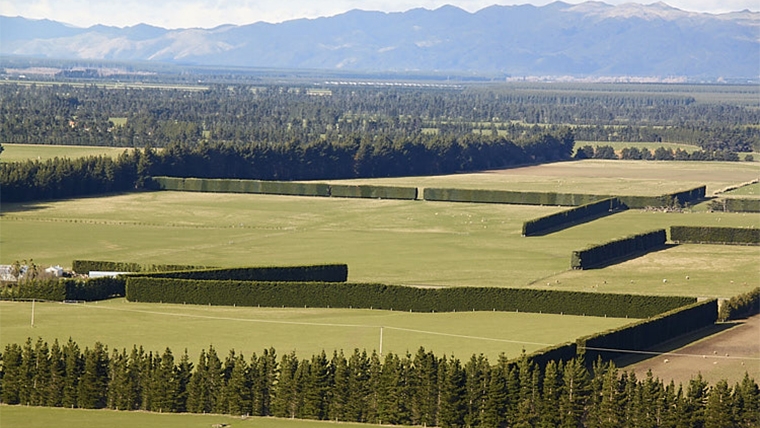 One of the pieces of advice I used to give students was that if or when they purchased or took over a farm one of the best things they could do is to plant a hedge along the public roadside.

This was based upon the principle that not only is planting trees a good idea for all sorts of reasons, but often blocking the view of the farm from scrutiny of well meaning but often a poorly informed public may save a lot of grief down the track.

A classic example was when living in the Manawatu a local dairy farmer was dragged through a trial by media when he was accused of having a cow that had gone down calving hanging by hip clamps all day. In fact, the farmer had lifted her post morning milking while he had a ‘cup of tea’ and again in the evening post milking. Unfortunately, this coincided with the same (well meaning) motorist seeing the ‘hanging cow’ in the morning going to work in the city and again on the way home- unfortunately drawing the obvious but wrong conclusions.

A neighbour here in Canterbury was also accused publicly through Facebook of being cruel to a ewe for having it locked in a small pen on a wet day. He was actually trying to get it to take its lamb and it was in a sheltered spot. A good hedgerow could prevent misunderstandings.

However, I am starting to review my position on planting hedgerows having seen a local tree trimming company cutting back the branches of a macrocarpa hedge to prevent them hitting overhead powerlines on behalf of the local lines company. They were doing an admirable job, as landowners in Waikato, Taranaki, Canterbury Southland and other provinces can all attest to, getting contractors to trim hedges is fast and normally relatively good value for money.

What is changing is now landowners (or power companies) are having to meet road safety requirements and make sure that motorists are not put at risk when passing such work. Farmers normally rely on the contractor’s common sense which means they keep an eye on traffic movements and branch size and stop cutting when vehicles are passing. I cannot recall hearing any instances of vehicles being damaged etc from flying branches. The power company obviously has deeper pockets than most farmers and there is likely to be a manager who does not want to be implicated in any legal dispute with the traffic department, so out come traffic control. Where there was just the trimmer in the past, now there is also a couple of traffic control utes complete with flashing lights a small army of cones, the road now constrained to a single lane and a couple of stop go persons to facilitate the flow of traffic. Normally a landowner might be expected to pay perhaps $300-$400 for a couple of hundred metres of hedge trimming (prepared to be corrected as it depends upon branch size and access etc).

If Waka Kotahi (NZ traffic agency) or councils start to enforce the law I can see this cost sky rocketing.

At the moment councils require land-owners to mow verges (these can be several kilometres in length) and keep branches from intruding into both motorist and pedestrian accessor visibility. Tree trimming usually is carried out every 3-4 years verge mowing can be 5 -6 times per year depending upon region and season. So already this is a considerable financial and time imposition on landowners and judging by how much ‘protective’ infrastructure is utilised on main highways there is yet another potential threat to land owners bank accounts.

Despite the threat of additional costs coming landowners way, I still lament the loss of trees across the Canterbury plains. Whether because of the threat of future costs or for other reasons in Canterbury there seems to be a move to turn the plains into a green desert.

There used to be a large area of plantation trees across the plains largely owned by the Selwyn Plantation Board (60% Selwyn Council and 40% Christchurch City ownership). These were established to try and help slow down the strong runs of wind and the damage that results.

In 2011 5500 hectares of cutting rights were sold to the United States-based forestry giant Rayonier. At the time I was told that the ‘Board’ intended to ‘replace’ these trees with purchases of hill country more suited to growing trees. However, surprise, surprise 10 years on and there is not a mention of it.

Needless to add most of the ex-plantation land has gone under irrigation and mostly into dairying.

Sadly, the ‘need’ to facilitate the movement of the large centre pivot irrigators many internal tree rows of various types (all exotic) have and continue to be removed. Some landowners have made some efforts to replace smaller areas with native trees and shrubs but there is a long way to go to replace the areas that have been lost.

In Canterbury the best restoration work appears to being carried out by Te Ara Kākāriki Greenway Canterbury Trust which is an incorporated Charitable Trust with the goal of increasing biodiversity in Canterbury. I could be wrong but the regulatory bodies that benefitted from the sale of the Selwyn Plantation Board do not appear to be doing much, if anything.

Why is it that the aesthetics never seems to enter the equation? If I had my way landowners would also be charged for the loss of amenity caused by all the ugly radiata and macrocarpa windbreaks, not to mention the environmental damage from monoculture pine forests.

the same argument applies to the cities ...
... loss of amenity caused by those ugly sprawling suburbs not to mention environmental damage from mindless consumption monoculture

" I still lament the loss of trees across the Canterbury plains..."

The land is now visibly a factory ... all centre pivots and steel frames and old trees gone
Thats what growth mandates and it comes from debt and living standard demands from the masses

I am puzzled by the implication that landowners are required to mow berms, as this land belongs to the local council surely they are responsible and if not should the adjacent landowner be paid for the service or allowed to fence it off and graze?

I spent all last weekend with a brush cutter clearing the council creek that runs down one paddock boundary, it's currently full of blackberry, thistles, wild fennel and so on. Maintaining it is a bit of a hassle but it's better than having the weeds crawl onto my land while I wait for the council to do their once-in-a-whenever spray. The more I maintain it the less likely the council will get in there and endanger the ecology of my soil.

Our road frontage is only about 120m so a quick rip along there with the ride-on when I'm doing the lawns and driveway isn't too much of an issue. Like the creek, waiting for the council is a futile exercise and potential fire risk during dry summers. Plus it means I get out of the gate for a change.

I have found planting mixed natives on road boundaries great. They look good. You can choose species that grow to 4-5 metres and don't need trimming, and gives armchair animal rights activists something to look at, rather than through.

Anything in particular? Our road front hedge is a mess of dying pittosporum, akeake and bottle brush that we're about to replace. Anything that I don't have to trim to keep out of the power lines is a bonus. It seems hard to get solid advice from the local nurseries, they seem far more focused on urban gardens these days.

Why not set back the hedgerow away from the transmission lines to avoid having to cut all together? Or plant a variety that only grows to a height that doesn't affect powerlines? The obsession with utilising every square inch of "farmable" land seems to be the problem here...