Guy Trafford explains how Fonterra and some other large exporters were saved from the worst of the freight stress by the Kotahi Logistics operation. He also shows that China's pig virus crisis is far from over

Rural News
Guy Trafford explains how Fonterra and some other large exporters were saved from the worst of the freight stress by the Kotahi Logistics operation. He also shows that China's pig virus crisis is far from over 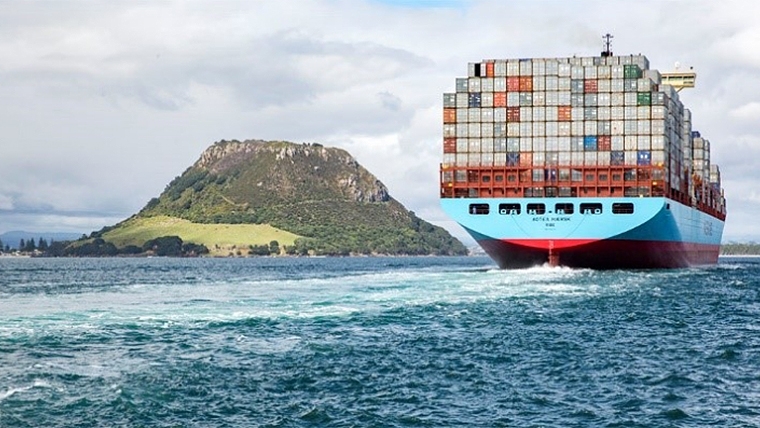 Sailing past the Mount

Despite the issues of global logistics imposed upon exporters by the Covid-19 pandemic, Fonterra has managed to maintain volumes exported.

Fonterra has given much of the credit to their jointly owned (with Silver Fern Farms) logistics company, Kotahi. Set up in 2011, the company embedded some security of supply chain movement by signing long term strategic commitments with the Danish owned Maersk logistics company and the Port of Tauranga.

While most exports have been leaving via Tauranga, additional shipping through the ‘partnership’ has been able to relieve some of the South Island pressure as well.

A perhaps interesting aside is roughly how much of this is product sold on the Global Dairy Trade. For the year ending August 2020 GDT took 688,164 metric tonnes and by June this year the GDT total was 622,468 metric tonnes and with 2 months of sales to be added the end result will be somewhere around the 730,000MT or 35% of the total MT exported. So, while GDT is an important component of Fonterra exports and very useful for ‘price discovery’, perhaps not the total volumes as could be expected.

Rabobank have also recently published their Top 20 list of Global Dairy Companies. There has been a change to the top with Lactalis pushing Nestle’ aside to get to the top. Back in ninth place in 2000, Lactalis has made steady progress. Most of this is due, according to Rabobank, to a dedicated merger and acquisition strategy. They have a turnover of US$23bn but with another range of acquisitions pending in 2021 which have a combined turnover of US$2.5bn they will take some pulling in. 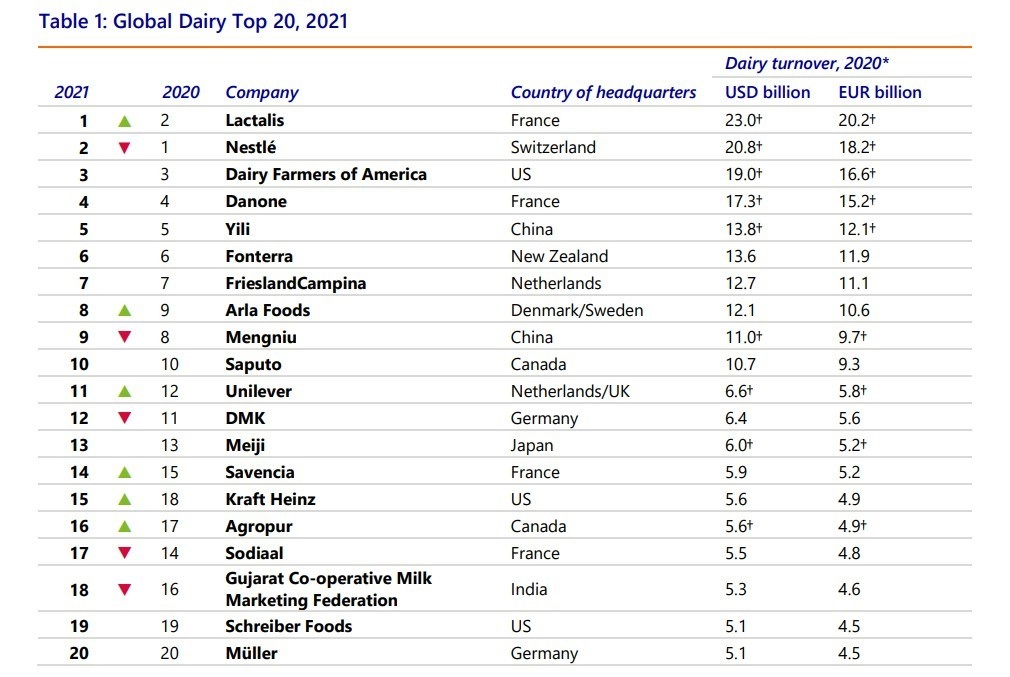 The biggest upward movement has been achieved by Kraft Heinz going from 18th to 15th. However with Lactalis about to acquire the Natural Cheese Business off them it may result in KH dropping out of the top 20.

Fonterra have maintained their position at 5th although they have shown a 5.3% gain on the previous year (although the results do include the sales of “China Farms”).

Rabobank notes the general trend of companies to move into the alternative dairy area. However, they also believe that dairy’s nutrient density will keep it a dietary staple.

The move into dairy alternatives has begun to “blur” the definitions of what constitutes dairy and at some stage in the future a redefining will be required. They highlight that the future growth in consumer demand post 2030 will not come so much from increased children and a growing population but rather from changing demographics with the growth of the “Active Silvers”. For example, China’s under 4’s will grow by 13m in the next decade but the over 50’s growth will be 100m.

They see challenges ahead for the EU and New Zealand with limited room for growth largely due to sustainability constraints and a move into more added value strategies will be required and possibly a greater move into plant based alternatives. Rabobank see the growth in world production coming from the growth in the ‘super dairies’ with operations having herds of over 250,000 head. These are likely to occur in countries such as the USA, Russia and of course China.

Staying with China, the evidence that the China-Australia tiff is far from over is coming from the increase in both frozen beef sales and coal sales to China increasing from the US. The values of US frozen beef exports to China between April and July this year were between eight and 18 times higher than their corresponding months last year.

In the meantime, Australian exports have plummeted. Australia seems to be putting a brave face on quoting the reason being lower stock numbers available due to stock rebuilding after droughts, etc. 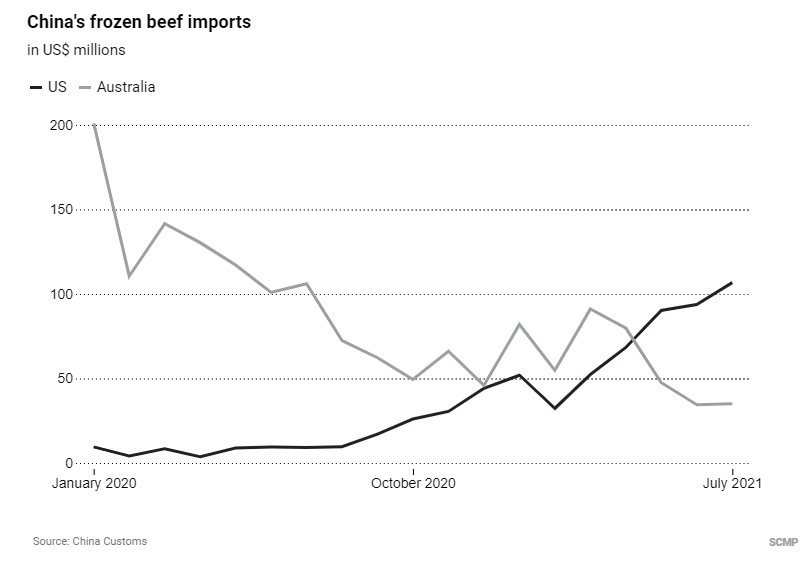 The African swine fever virus (ASF) that has decimated the pork industry in China is behaving very much like the Covid-19 virus and has re-emerged again in China. However, while the Chinese government has been able to control the virus among its human population the same cannot be said about the pork industry. Official sources are playing down the outbreak but “The Economist” says insiders are saying “its out of control”.

Experts say that the chances of a vaccine being developed is at least 12 months away. No doubt the re-emergence of ASF will aid meat export demand from New Zealand.

For 25 years or so China lay inscrutably behind its bamboo curtain. Then came the overtures from Nixon/Kissinger accelerated by Reagan/Thatcher. So the next 25 years produced extraordinary and radical change. Reminiscent of the British industrial revolution, vast rural to urban population movement, the dark side of which has been well documented by the like of Dickens. Arguable therefore I suggest, from a series of viral outbreaks, that China like Britain back then has had neither sufficient nor  rapid control of basic and elementary hygiene. Water and air pollution, food safety, medical & social services.  As with Britain an enormous number of previously settled peasants found themselves obliged to relocate in municipal environments, for which they were unsuited and where they simply overran existing services. The USA itself offers similar examples such as the infamously destitute Hell’s Kitchen.

In Britain, China or the USA nobody forced peasants off the land.  Their conditions were so bad they were actively willing to live in city slums and work in factories from dawn to dusk.  Notice how the whole process was slower in most of France where inheritance of land was divided among the sons rather than just going to the eldest.  A farm labourer's life was not joyous dancing round maypoles and picking wild flowers - it was a desperate effort to survive with even the fittest and most diligent at risk from a crop being destroyed by flood, drought, infestation.

That’s why I used the word obliged. Whatever the reasons or circumstances, eg the mass of uncontrolled migration into the USA, the result is dire when population overruns any one location’s capacity to accommodate it. And what compounds that problem is that the influx will include many of little ability to adapt to a new environment. My above point being some of what is manifesting in China has many hallmarks historically.

The enclosures happened in the UK. People were forced of their land.

The problem with dividing land as inheritance is the plots become uneconomic to the point they barely sustain the family unit themselves. As happened in Ireland leading up to the potato famine. Hence migration to areas where work is available. The same is happening in NZ and has been for many years. Farms are increasing in size now to have economy of scale which also means less employees.

Foxglove,
It is now more than  50 years since Henry Kissinger first visited China in July 1971, by which time China was already well on the road to economic development, albeit also just emerging from the Cultural Revolution.  I was myself fortunate to first visit China in 1973.   Kissinger visited China more than 50 times over the years through to 2011 (and more times since), chronicled on his remarkable book 'On China'. Regardless as to one's perspective on Kissinger, everyone with an interest in China should read that book.
KeithW

Tks KW. A good volume can never be amiss. Will seek it out. When I was young my family knew Rewi Alley (actually more so through Winston Rhodes)  so we got some fascinating stories and descriptions when he was back in NZ occasionally.

I was fortunate to spend a morning with Rewi in Christchurch in December 1971, just the two of us, at his brother Pip's home. I met him again in China in 1973.  Rewi remains an enigma in some respects but I regard him as a remarkable man.  And many who knew him, some much better than I did, think the same way. But Rewi's key contributions and insights related to the late 1920s though to around 1950.  In contrast, Kissinger's book 'On China' is interesting because he is talking about the modern China. There was Kissinger, a pragmatic Republican, who learned a lot about China and communicates his insights with great clarity.  The first President Bush, George HW,  also had considerable insights about China, having been the head of the US Liaison Office in Beijing in 1974/75.   One of the great books for those who want to understand China is 'My house has two doors' by Han Suyin. Han Suyin had a Chinese father and a Belgian mother and was brought up in China, but throughout her life crossed the cultural divides between the West and East, and with access to the leaders in both West and East. Once again, a truly remarkable book, now largely forgotten
KeithW

Early 1960s for me from my memory? Strong voiced, forceful but not domineering, patient and thoughtful too. As it would happen what has stuck with me was the tale told with a gale of laughter the outcome of the arrival  of state of the art public toilet block where the unsuspecting locals had simply used all of the installations, but not exactly in the right order for each function.

Mike565
You are correct.
It would take a remarkable change of thinking by Chinese citizens, and women in particular, for that to occur.
The demographic challenge for China is to maintain current birth rates, given the 'locked in' decline that is occurring in the number of women of child-bearing age
KeithW