Guy Trafford assesses the value of the NZ-UK FTA and finds the details released so far reassuring. Access to our most distant market is getting an upgrade

Rural News / analysis
Guy Trafford assesses the value of the NZ-UK FTA and finds the details released so far reassuring. Access to our most distant market is getting an upgrade 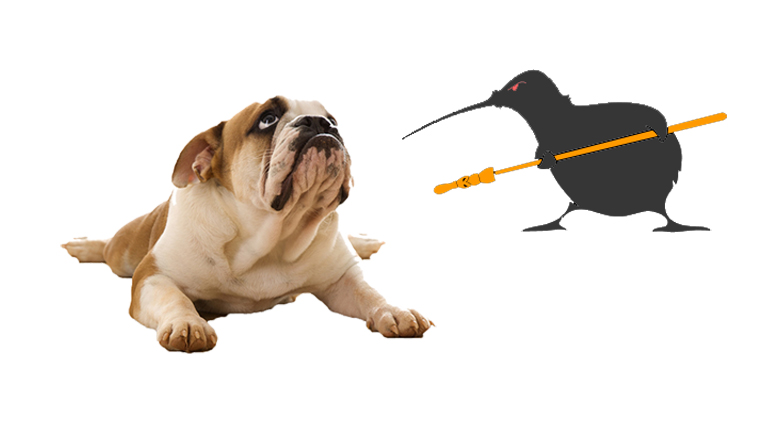 The silence around Minister of Trade and Agriculture's foray into the free trade territory has been broken with the best possible news (within reason) and the announcement of the new FTA with the UK.

At this stage it is an “agreement in principle” with still the fine print to be worked through, but it appears to be likely that the fish-hooks if any will be few. Now agreement has been made at the government to government level it is up to ‘negotiators’ to work out the detail for the relevant minister to sign.

Once signed then the action happens.

Not surprisingly agricultural exports from New Zealand will (eventually) be the big winners. Prior to this agreement New Zealand had a joint arrangement with the combined EU and UK. Brexit put that up in the air. (The EU and UK had earlier proposed to split the existing quotas between the two blocks which would have reduced flexibility to move product to the best market(s) and dairy and beef in particular were getting a rough deal.)

In the red meat area beef has always been the bridesmaid when it come to preferential access into either the EU or the UK. Now, while patience will be required to get the full benefits at least a pathway exists for greater movement of product into the UK. Going to the MFAT site for the good oil:

“The UK will remove duties on beef after 10 years (duty-free from Year 11 onward). During the first 10 years following entry-into-force of the Agreement, a duty-free transitional quota will be made available for originating beef imports from New Zealand. This quota volume will increase in equal annual instalments, in line with the below:

If this quota is filled in a given year, any further originating imports of beef from New Zealand will be subject to Most Favoured Nation (MFN) base rates. During years 11-15 following entry-into-force, a product specific safeguard will be applied to beef. Trigger volumes will increase in equal annual instalments, in line with the below:

If the trigger volume is met in a given year, the UK will apply a duty of 20% to any further originating imports of beef from New Zealand, for the remainder of the year. The product specific safeguard will be removed at the end of Year 15 and beef trade will be fully liberalised.”

Currently the UK imports about 35% of the 250,000 tonnes of beef it consumes. Prior to Brexit, New Zealand beef had access into the entire EU with a limited quota of 1,300 tonnes. It is this amount that was proposed to be split. The new 12,000 tonnes is obviously a considerable improvement. At the moment the USA is our top market worth over $1.4 billion out of a total export value of $3.7 billion with China not far behind. (China was leading but Brazil has provided a cheaper supply in recent times).

“The UK will fully liberalise sheep meat after 15 years (duty-free from Year 16 onward). During this time, a duty-free transitional quota will be made available for originating imports of sheep meat from New Zealand. This quota volume will be set as below:

If this quota is filled in a given year, any further originating imports of sheep meat from New Zealand will be subject to MFN base rates. In a given year, trade can only occur under the FTA quota once the utilisation of New Zealand’s WTO country-specific sheep meat quota into the UK has reached 90%.”

When it comes to dairy products:

“The UK will fully liberalise butter duties in 6 equal reductions over 5 years. During this time, a duty-free transitional quota will be made available for originating butter imports from New Zealand. This quota will open at 7,000MT from entry into force and will build in equal annual instalments to 15,000MT at Year 5. Butter will be duty free, quota free from Year 6 onwards.”

“The UK will fully liberalise cheese duties in 6 equal reductions over 5 years. During this time, a duty-free transitional quota will be made available for originating cheese imports from New Zealand. This quota will open at 24,000MT from entry into force and will build in equal annual instalments to 48,000MT at Year 5. Cheese will be duty free, quota free from Year 6 onwards”

Prior to this deal the UK has been only a small market for New Zealand dairy exports, accounting for 0.08% of New Zealand’s dairy exports in 2019.  This is despite the fact that the UK is one of the world’s largest importers of dairy products.

A summary of the above and the other adjustments is shown below. 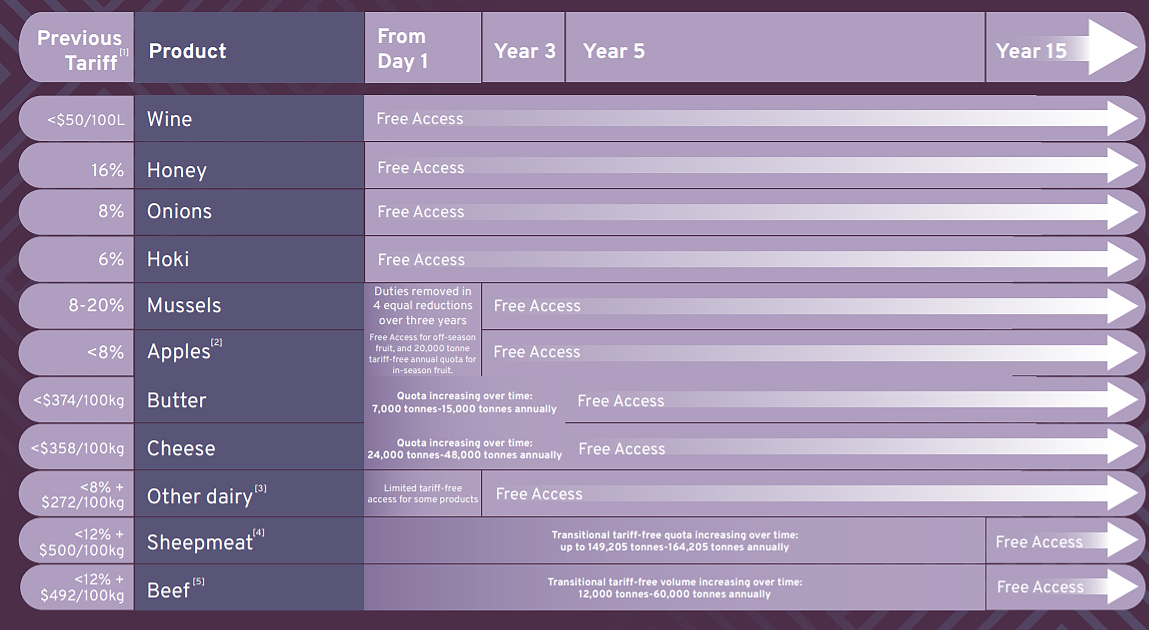 With Australia completing their FTA agreement with the UK some months ago, many in New Zealand were concerned that New Zealand may have just got the crumbs that were left offering. Doing a quick comparison and taking into account the relative size of the countries exports New Zealand has come out ok. Not ahead as our dairy exports deals have cheese much the same although our non-cheese (butter) is about 50% ahead of the Australian deal. However, ignoring Australia it appears that the deal reflects a job well.

The UK gets immediate (upon signing) access to New Zealand markets tariff free, but as New Zealand is on the right side of the trade balance with a $500 million surplus (2020) this is not unexpected. 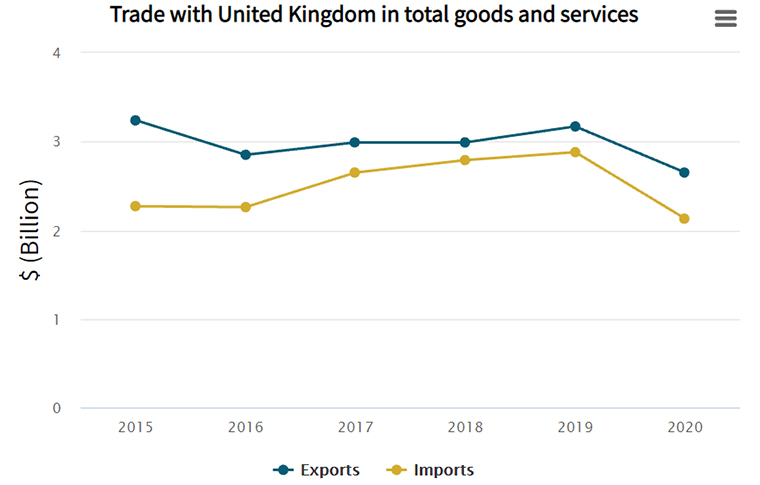 Products sourced from the UK by and large do not compete head-to-head with New Zealand products. Although at a personal level I will be watching to see if an increase in British cheeses starts to appear. 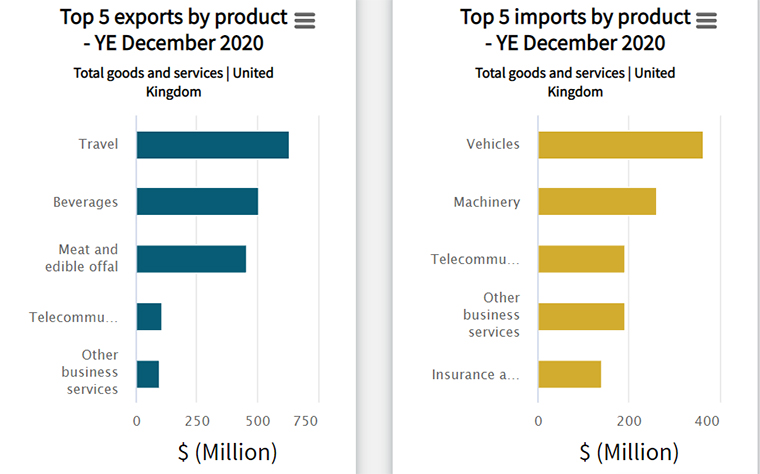 The UK deal is only one half of the promise of expectations to come out of the Minister’s trip north. We wait now for the results of the EU negotiations. These are likely to take longer to resolve as they were not as well progressed prior to his departure. But so far, a job well done.

if ever a picture needed the laser Kiwi flag picture it is the one in this article.

No clear surplus winner: Both countries in need of releasing the family silver to extinguish their ongoing global deficits - United Kingdom Balance of Trade, New Zealand Balance of Trade.