Omnivores might think is is a depressing thought to convert to vegetarianism, but they could be on to something. Many studies show there is a link between vegetarianism and depression

Rural News / opinion
Omnivores might think is is a depressing thought to convert to vegetarianism, but they could be on to something. Many studies show there is a link between vegetarianism and depression 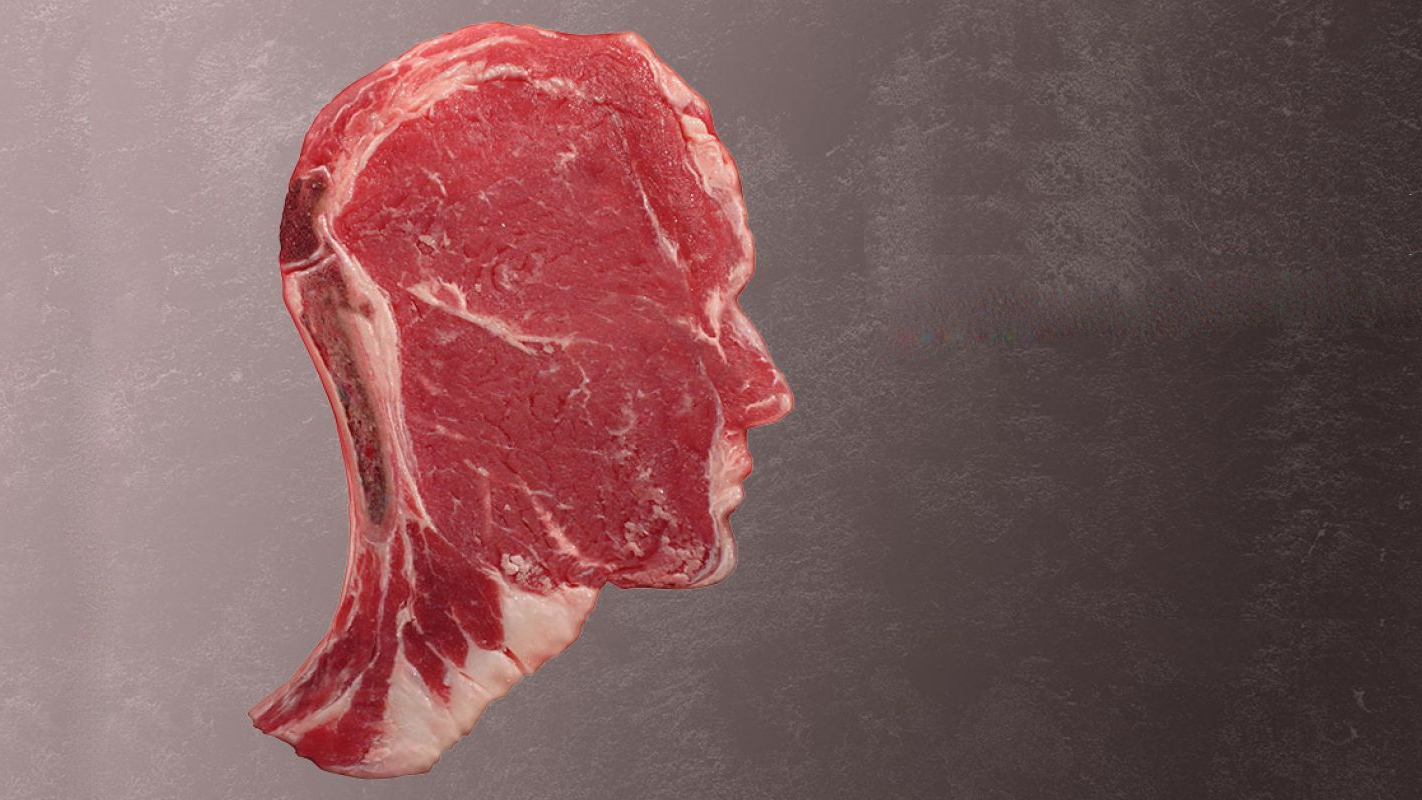 This week on Factum-Agri I am talking with Andrea Braakhuis who is a Dietitian and is the Academic Director for the Masters of Health Science in Nutrition & Dietetics at the University of Auckland. She has some interesting research to discuss on a link between vegetarianism and depression.

Listen to the podcast.

Here is a non-comprehensive list of some research linking vegetarianism and depression.

• A longitudinal study of 14,247 young women found that 30% of vegetarians and semivegetarians had experienced depression in the previous 12 months, compared to 20% of non-vegetarian women. (Baines, 2007)

• Researchers examined mental health issues among a representative sample of 4,116 Germans including vegetarians, predominantly vegetarians, and non-vegetarians. The subjects were matched on demographic and socioeconomic variables. More vegetarians than meat eaters suffered from depressive disorders in the previous month, the previous year, and over their lifetimes.

• In a British study, 9,668 men who were partners of pregnant women took the Edinburgh Postnatal Depression Scale. Seven percent of the vegetarians obtained scores indicating severe depression compared to four percent of non-vegetarians.

• In a 2018 study of 90,000 adults, French researchers examined the impact of giving up various food groups on depressive symptoms among meat eaters, vegans, true vegetarians, and vegetarians who ate fish. The incidence of depression increased with each food group that was given up. People who had given up at least three of four animal-related food groups (red meat, poultry, fish, and dairy) were at nearly two-and-a-half times greater risk to suffer from depression.

• Investigators from the College of William and Mary examined depression among 6,422 college students. Vegetarian and semi-vegetarian students scored significantly higher than the omnivores on the Center for Epidemiologic Depression Scale.

• In 2014, Austrian researchers published an elegant study of individuals who varied in their diets - 330 vegetarians, 330 people who consumed a lot of meat, 330 omnivores who ate less meat, and 330 people who consumed a little meat but ate mostly fruits and veggies. The subjects were carefully matched for sex, age, and socio-economic status. The vegetarians were about twice as likely as the other groups to suffer from a mental illness such as anxiety and depression.

• A study of 140 women found that the odds of depression were twice as great in women consuming less than the recommended intake of meat per week. (The researchers also found that women eating more than recommended amount were also likely to be depressed.)

• An article published in the journal Neuropsychobiolgy reported that the frequency of Seasonal Affective Disorder was four times higher among Finnish vegetarians and three times higher in Dutch vegetarians than in meat eaters.

More work needs to be done in this area the connection between vegetarianism and depression. A German study, and one Braakhuis talks about in the podcast, found about found that 34% of people with depression started on a vegetarian diet before the onset of their mental disorders, compared to 9% of people with anxiety disorders.

Perhaps some traits may predispose some people to both depression and to vegetarianism. Did you know, women, for example, are twice as likely as men to suffer from depression, and there are also more female vegetarians than male vegetarians according to psychology professor Harold Herzog from The Western Carolina University.

Listen to the podcast to get the full story and full perspectives.

Anecdotal I know but since I have gone on a 90% animal product diet with the bulk of calories coming from red meat (and eggs, butter, cheese, cream) I have noticed a definite improvement in mood and general upbeatedness. Other things too like skin condition (skin tags withered and fell off), body composition, eyesight all seem to have improved markedly. Mind you I am exercising quite a lot as well.

I've trained my body over the course of a year to burn fat and convert protein to glucose, negating the need for carbs, reducing hunger and generally improving all health markers.

If I had a suicidal or depressed teen in the house I would urge them to go carnivore at least for a month and see if it improves mental health. I suspect it would.

I'm on a meat and beer diet, seems to be working well.

Commendable but have you considered the benefits may be coming from limiting carbohydrate rich food?

I can live comfortably on low carb veg and fish.

Yes possibly or even just calorie restriction. It's notable when viewing vegan, vegetarian, keto and carnivore promoting YouTube videos that many commenters claim amazing transformations in body and mind with the respective diets.

My theory is that vegetables are essentially poisonous, like almost all plants, needing to be carefully processed before consumption. Vegetables are likely to have more of an impact psycho-actively than meat. After all most drugs were derived from plant toxins. Hence the high level of anxiety and depression. For a million years or so our ancestors enjoyed a largely meat diet from hunting mega-fauna with the occasional ingestion of plants and also mushrooms because of their narcotic effect. There is little or no evidence of plant processing tools in the archeological record before around 40k bc.

I thought our ancestors were monkeys and lived on bananas, but they undoubtably ate small mammals and insects, raw.

My suspicion is there is a narcotic effect in cooked beef and it may be the fats, but each to their own.

Have you tried chicken and lamb as substitutes?

Our most distant ancestors were single celled organisms.....

One or two million years is enough time for significant evolutionary development. The transition from herbivore to omnivore to practically carnivore could occur in that time frame. We only really started eating a lot of plants since the advent of agriculture and civilization. Madness ensued..

There are a whole host of poisons in plants....scientific fact.

And don’t we love them, like the byproduct of the grape for example, maybe fats are in that category..thing we love and shouldn’t.

There is a theory that the main driver of agriculture and civilization was to produce alcoholic beverages.

Pork fat is one of the most nutritious foods you can eat.

Anecdotal I know. Precisely. One of the fittest people I know is vegan and currently cycling the length of the country. What does that prove? Absolutely nothing.

I am delighted you are in good health, but have no wish to emulate your diet. Anecdotally of course, I have survived happily on a diet of eating meat, vegetables and fish, all in moderation.

People need to see what works for them as no solution fits everyone. If someone is having health issues they could look at diet as it is something one can do very easily. A lot of things that are believed by most people concerning diet could be wrong, like how it is essential to eat certain things and thus may be fearful of a change in diet. My view is that one could try something for a few weeks and observe what happens. One could go vegan or carnivore as these eliminate certain foods which could reveal an allergy or negative response to a certain food.

Disclaimer: As always consult your doctor first. I personally don't as haven't seen a doctor in a few years but that's risky and not recommended.

So, Beyond Meat is Depression ?

The author is rather poor at discerning scientific research. There are fundamental concepts of correlation and causation, but of course, the article implies the author does not understand any of them. Merely referring to some random studies doesn’t suffice a scientific conclusion, an inquiry into the causes is warranted not just correlations. My point would be easily understood if I made a statement such as ‘a study suggests people who eat meat are more aggressive and violent’ or some other irrational stereotypes. You may as well say that researchers find depressed children treated with energy drinks improved their mood significantly.

In scientific research, there may be cases where a weak correlation exists, but that is far from concluding that one caused the other. No intelligent conclusions could be made by randomly quoted studies without any peer review, academic citations, and other scientific controls

I’d also review the funding for such studies, where it came from, and if any conflicts of interest exist.

I expect better editorial oversight by the interest editorial board, or does it not matter in the name of freedom of opinion.

Things are a bit clearer if you listen to the podcast.

Disregarding all the arguments it's relatively easy for someone to perform an N=1 experiment and try a radical diet change and observe what happens. A month of meat, eggs, cream and butter while daily recording mood, blood pressure, weight, energy level, aches and pains level, could be interesting.

All these surveys are rather poor in that the meat eaters are eating a lot of processed foods and plants. As far as I am aware there have been few if any studies comparing people on a carnivore diet with strict vegetarians.

I don't do strictly carnivore as I have the odd beer and a daily avocado.

The last paragraph blows the whole argument out of the water.

We have a body of a herbivore, and long distance running of a hunter. Did eating meat made us what we are today. Plant based foods are good for us, so is meat and fat. I dare say.

This depression study might have some truth, just like fishy omega oils and eggs on heart health.

Our bodies have a lot of in common with those of carnivores. Our trophic levels clearly indicate we are in the hyper-carnivore guild.

The evolution of the human trophic level during the Pleistocene

Being a vegetarian in a Western culture is usually a conscious choice, and a lot of it is heavily influenced by moral views about killing animals and the supposed environmental harms of dry stock farming.

So it probably stands to reason that overall, vegetarians aren't as positive and upbeat than someone who's able to be an omnivore, oblivious to, or possibly in spite of, the consequences.

That's assuming one's mental wellbeing and state is influenced by more than diet.

A lot more animals die or get hurt on a cropping farm than any sheep or beef outfit. Have you seen what all those pesticides do? Or large machinery? Nothing quite like seeing a rabbit or hares legs walloped off with a big machine.

The vast swathes of veg that we eat has a massive cost in the lives of insects, birds, reptiles and mammals. Its just unseen by townies. God forbid that a bird has a peck on your pinot grape.