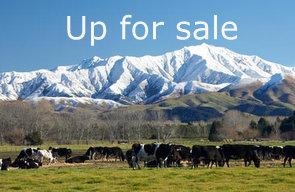 A 62.5% stake in Dairy Holdings, the country's biggest dairy farming group, is going on the block.

Confirmation comes after Downey told interest.co.nz last week that he was in talks with an investment bank about working with Murray & Company, which has been trying to sell a combined 28.8% stake in the dairy farming group on behalf of three US shareholders and Christchurch businessman Humphry Rolleston.

Downey said the sales process would kick off before Christmas and build on the process undertaken over the past two months by Murray & Company on behalf of the US and Rolleston interests for their combined shareholding. Downey, managing partner of McGrathNicol, has appointed First NZ Capital to act with Murray & Company as joint sale advisers for the sale.

Rolleston said the opportunity to sell a majority stake in Dairy Holdings was likely to be more attractive to potential buyers. And Downey said it was possible a shareholding in excess of 62.5% could ultimately be sold depending upon whether the other shareholders of Dairy Holdings also decide to sell.

“There is the opportunity for them to join the sale process we are undertaking at any stage,” said Downey.

Dairy Holdings owns 72 farms in Canterbury, Southland and Otago with 43,439 cows, making it the single largest privately owned supplier to Fonterra. Its website shows it is forecast to produce 15.1 million kilograms of milk solids in the current season.

See Double Shot interview with NZ Super Fund CEO Adrian Orr who talked about potentially partnering in the buy up of clusters of farms.

SCF bought the Dairy Holdings stake from its majority owner Allan Hubbard last year for NZ$75.7 million. In a swathe of correspondence recently released by the Reserve Bank relating to SCF, the central bank suggested SCF had paid almost twice fair value for the stake.

A Reserve Bank email from September last year also noted Dairy Holdings had NZ$340 million of bank debt. However, Downey said last week there was no pressure from the banks to sell the business.

excuse me, I see a problem didn't this farming enterprise lose over 20 million last year? isn't it projected to only lose 10 million this year but now its dry a result similar to last must be expected.

If it doesn't make a profit how does ANZ get its $380million  loan back, how do you value it.

The only option is to sell it to the Chinese.

And then the question is, would the OIO approve it?

Have to ask the govt that one?

Wouldn't surprise me if we see the likes of NZ Super Fund/ACC etc buy it.

Anyone know who the other shareholders are?

A comment I previously made is that Dairy Holdings is worth bugger all and from looking at comments from David Hillary’s blog it is possibly worthless.

They should get Sandy Maier to run this sale. He is good with valuations and create transfers of this asset

The shares at a $25kgms on 2009’s books possibly have a negative market equity value. Factor in share milk/management contracts and we could even guess that Shareholder Loan Guarantees are also involved it could be a lot worse.

This poor guy now has a security guard outside his farm, last lot of comments an an interesting thread, dairy farming must be going great

FYI, I have updated this with comments from the NZ Super Fund.

Gareth, would be interested in comments from NZ  Super Fund, last time I was in contact with them they wanted to wait and see.

NZ Super Fund are very aware there is going to be a lot of forced farm sales and they will be able to buy in at good prices.

There is a comment from them in the story. I agree, they shouldn't be short of cheap buying opportunities.

Orrs comments that Super Fund could be an investment partner means probably they will partner with overseas investors. My understanding SF has 300-500 million to spend over 3-5 years. The new OIO rules I think investors can purchase dairy 10 times the average size of dairy farm 172 hct and same for sheep and beef av size  times 10. Problem for Fonterra redemption risk on supply shares. Would be good to see these farms bought and then reconverted to smaller units for sharemilking couples and balloted out to allow younger farmers to enter industry and NZ retain protein production. Economy of scale works to a certain point and then becomes inefficient with staff issues, machinery etc. Let the keen young ones have a go.