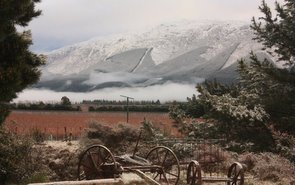 The Antarctic blast hitting most of New Zealand this week is not expected to cause major livestock losses because it was too early in the year for the most vulnerable areas and there had been plenty of warning for farmers to move stock to shelter, Federated Farmers has said.

“You know it’s a cold front out of the box when our staff in Wellington can compare snowfall with you in Invercargill,” said David Rose, Federated Farmers Adverse Events spokesperson.

“As with the front several weeks ago, the MetService gave us plenty of warning to shift vulnerable stock into sheltered paddocks and into yards. This was accurate and timely and Federated Farmers appreciates the MetService’s work.

“The MetService is also forecasting a number of good weather days towards week’s end, so the light is appearing at the end of the tunnel," Rose said.

“The only note of concern is from areas where snow is a complete rarity, like the Waikato. Dairy farmers couldn’t believe their eyes this morning that they were milking in snowfall. Being in a ‘warmer’ part of New Zealand, lambing is underway there," he said.

“That said, in the Bay of Plenty, farmers are mostly reporting a light dusting of snow and lambing is really just beginning up there. Certainly, there are no real issues for livestock and it’s a similar picture in Auckland and Northland. While there are pockets of lambing underway in Canterbury, for the cooler regions of New Zealand or those at elevation, full scale lambing is still several weeks away. "

“Lambing in Southland doesn’t start until September while in the High Country, it’s still a long way off in October. Lambs and calves are incredibly robust. Even if it’s cold for us humans, it takes just a few days of settled weather for them to find their feet.

“Farmers also entered winter after a great autumnal period and generally remain well prepared for whatever winter may throw at us."

Year, after year tragedy for farmers and sheep - millions gone ! There must be a better way.

What about simple, but strong temporary tent like, poly tunnels constructions for sheep (lambing) ?

Oh great idea Walter...now let's see ...council demands resource consent for each one...plus additional rates charge to pay for the much needed annual inspection...yep I can see farmers rushing into this one. not.

Far better to leave patches of bush as shelter and truck out the feed...if lambs die in the cold the price goes up...if they don't the price goes down. Ho hum.

If Kathmandu have a spring sale , all the cockies can whizz on in and get some half-priced tents for their sheep ! ... Excellent suggestion Walter . Imagine that , sheep spending the winter in their discount tent .

Unfortunately, a huge tent or the likes would be a a big mess of crap and disease after a couple of days. Although this morning I did put 100 ewes I thought were most likely to lamb in the next few days in the woolshed, expecting a big mess in there tomorrow morning. But still have a few other mobs lambing, but due to very good weather forcasting this time I have been able to hopefully minimise losses, with ewes in a small woodlot and a couple other small mobs in the most sheltered of matagouri filled gullys.

The ram did go the the ewes later this year to hopefully avoid weather like this, but a good number of my neighbours ram lambs has made a fair mess, getting to 10% of my ewes. Sometimes the best laid plans don't always go right.

I doubt the 'townies' know what the hell you mean Dinky!

I think you underestimate "townies" Wolly. Although it is easy to talk in ones own lingo, like "farmer speak". I don't expect a lot of "townies" to read the rural section here. I'll try to type more slowly next time so they can know what the hell I mean.

Why cant there be at least wind shelter of some description ie trees, bamboo ??.  There must be some structure that would help ?? Maybe take the unemployed and use them ?

Because HP the councils would require resource consents and payments and fees and charges and inspections and what the hell is the point if the price goes up when heaps cark it in the snow.

For a wind barrier ? Are you kidding ?  If so the law needs to be changed.  I don't eat a lot of meat (but like free range eggs) I would pay more if I knew the meat was coming from a farm where its animals are treated better.

do you know Where your meat comes from?

Supermarket dumb dumb.  Seems to me all you care about is profit rather than the welfare of your animals.

" Lambs and calves are incredibly robust. Even if it’s cold for us humans, it takes just a few days of settled weather for them to find their feet".

Most lambs and calves in Southland born on days like this will not live to see the settled weather.

Nothing better to warm a farmers hart than a fat paycheck.

Im in the middle of lambing, spread my ewes out., last night about 20 ewes lambed, no losses at all. You need driving rain to get a decent kill, this is cold but its not wet here and the ewes have plenty of shelter.  I hate seeing those nude farms, often you go to a farmer of the year presentation and no trees, all about production, its been driven from the top and is idiotic. I've planted another 200 trees this year and doing 15 acres next year, in a mixed forest,no pines, oaks, beech, redwoods, cedars etc, going to be expensive but we decided to go ahead anyway.

Not too bad down here as yet either AJ, although most of us are a month or so from lambing. Metabolic issues could arise if we get another day or two of it or if the snow freezes.

Eskfrmr, your comments are nonsense. Every farmer in the country would have been prepareing for this well forecasted event and would have been busting their ring in the elements today to make sure all stock were as well fed as possible. To suggest we dont care about our stock is frankly offensive.

Sheep Shagger I do not suggest farmers dont care about their stock, but just keeping them well fed in a southerly did not do the tric for me. To close the gate on the cows and seeing them shiffer uncontrolably for days and see them standing in 40 cm off mud on the crop with no place to ly down, hundreds of thousands of dead lams piled on the roadside because of a southerly during laming these are all the realities of todays farming. We have accepted this as part of our way of farming, lets just hope our overseas markets see it the same way.

The snow has been widespread but there's not been a lot of it. The media are being hysterical. Temperatures are no worse than normal and in fact aren't bad at all for this time of year. The windchill can be hard when it's blowing, but things have calmed right down now. This is has been a huge to-do about almost nothing really.