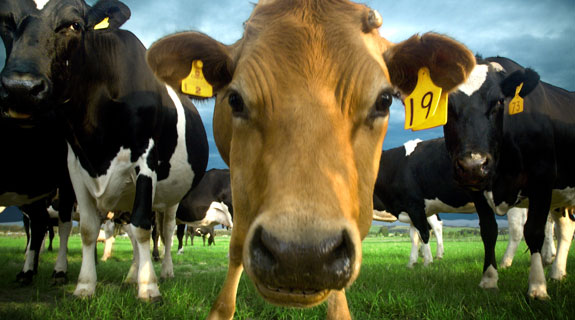 A group of New Zealand investors opposed to the sale of the Crafar farms to Chinese buyers, and which would like to purchase the farms itself, has written to the Overseas Investment Office (OIO) detailing the economic benefits it believes it will bring to the farms if allowed to purchase them.

The submission is an attempt to influence the Overseas Investment Office's determination of what a hypothetical New Zealand buyer would invest in the farms and what economic benefits that buyer would bring to the economy.

The OIO and government Ministers will then try to determine whether the economic benefits proposed by Chinese buyer Shanghai Pengxin would identifiably and substantially outweigh those of the hypothetical buyer as it revises its decsion to grant the sale of the farms to Pengxin.

But the OIO told interest.co.nz on Friday morning after receiving the submission that it was still too early to know whether it would take the document from the local Crafar Farms Independent Purchaser Group into account when making its determination.

The OIO would first have to run the submission past Pengxin's solicitors and run its own comb through the proposals. It is looking to make its revised decision on whether to grant Pengxin the purchase or not within the next few days.

The Crafar Farms Independent Purchaser Group (CFIPG), led by merchant banker Michael Fay, said it had not shifted on its NZ$171.5 million offer price for the farms. That is well below the NZ$210 million Shanghai Pengxin (and its subsidiary Milk NZ) is thought to have offered to the farms' receiver, KordaMentha, which has said it would not entertain the Fay group's bid because its offer price was too low.

The Overseas Investment Office last month granted approval for the farms to be sold to Pengxin, which triggered the Fay group to seek a judicial review of the OIO's process. Justice Forrie Miller judged that the OIO had made the wrong considerations when determining the 'economic benefits' factors set out in the Overseas Investment Act, and ordered the OIO to reconsider its decision.

The economic benefits promised by Pengxin must be identifiably and substantially higher than those offered by the hypothetical local investor.

However, it is not known whether the OIO would take into consideration what other bidders are promising to do with the farms when determining what a hypothetical New Zealand buyer would bring. It has previously noted the receivers were not entertaining the CFIPG bid because its offer was too low.

Giving it a go

The Fay group today wrote to the OIO outlining what it would invest in the farms, how many jobs it believed its investments would create, and by how much it thought it could increase production on the farms.

“That figure is an aggregate based on what our buyers believe is a minimum figure for each farm. Each buyer in the Group will own just one or two farms, if the offer is successful, and the Group believes the combination of local farm knowledge and investment combined with Iwi stewardship of important historical sites trumps any benefits an overseas buyer can bring to the table,” spokesman for the Crafar Farms Independent Purchaser Group Alan McDonald said.

“While our group has yet to carry out formal due diligence, the NZ$18 million plus is based on what our buyers believe is the minimum that will have to be spent on capital improvements needed to ensure each farm reaches full production,' McDonald said.

“Given that these farms are quite literally over the back fence of properties already owned by the individual buyers in our Group, they have a very good idea of what needs to be done and what production can be sustainably achieved from these farms," he said.

The group envisaged that amount of investment would lead to a 25-30% increase in producticity and performance across the 16 farms, and a 15% increase in permanent staff and contractor levels. That amounted to an extra 13 or 14 workers, it said.

"This increase is assessed by comparing the current staffing ratio of the farms to the average levels for fully productive farms and by applying the industry standard staffing ratio of one full time equivalent employee per 250 dairy cows. In addition, there will be significant short term employment created through the initial period of capital expenditure," the group said in its letter to the OIO.

The expected increase in productivity was based on group members' "direct experience and the analysis they conducted for the purposes of making their offers to acquire the Farms," it said in the letter.

What Pengxin would bring

Pengxin's has said it would invest at least NZ$14 million in the farms to make them economically and environmentally sustainable. It said it planned to increase production by 10%, and wanted to capture a bigger share of the Chinese market with branded, dairy-based consumer products. New Zealand workers would be employed to upgrade the farms.

In April 2011 when it applied to the Overseas Investment Office for permission to buy the farms, Pengxin said it was looking to spend NZ$100 million marketing products such as cheeses, ice creams and baby products in China. Instead of vertically integrating to control the entire production process, it said it would rather use New Zealand dairy plants to create and manufacture these value-added products.

When the OIO granted Pengxin's application in January, it revealed Pengxin had also promised to establish an on-farm training facility for dairy farm workers, and said it would meet the costs of establishing that facility. It would give two scholarships of not less than NZ$5,000 each year to students of the on-farm training facility with the first two scholarships to be awarded by 31 December 2013.

Pengxin would also enter into an arrangement for SOE Landcorp to manage the farms. The arrangement between the two would be akin to a 50-50 sharemilking agreement, Pengxin has said.

Pengxin, and its subsidiary Milk New Zealand, would also "use reasonable endeavours to assist Landcorp to extend its business to, and market its products, in China."

How strange, so the OIO now is to be the untimate determiner of who should purchase the farm instead of the receiver ??  Are we in the situation now where goverment bodies decide who gets to buy what and at how much ??

I suppose it not so strange as to decide if your investment proposal has to compared with a "hypothetical" non existent buyer who can and will outbid you in your every proposal. Afterall they don't have to fulfill it as there will not be any binding commitment.

I have a solution, put them all up for auction one at a time, the banks get what they get, the way it works for the rest of us. If the Chinese want them then they need to get aproval before hand. Why are we running scarred of the market?

Exactly, we are in the realms of fantasy now.
More to the point does this mean all NZ farms are for sale 15% off?

Questions:
Have you had your offer sitting on the table for 3 years?
Was the vendor under mortgage pressure to sell?, or
Was the vendor merely desirous of moving on in life?

No we didn't have an offer on the table over that period of time - but we did view the property about 18 months - 2 years earlier.
The vendor was a limited liability company, property investment/farming was not their core business and I understand they were keen to realise a sale.

The vendor was a limited liability company, property investment/farming was not their core business and I understand they were keen to realise a sale.

I wonder if the seller was really the vendor's bank if you were purchasing land at 42% below the previous sale price?
Cumulative reductions in land sale prices of this magnitude will surely see bank deposits  extinguished, in the long run, as bank shareholders will be reluctant to capitalise mounting losses.

Fay can say he's going to spend this or that until he's blue in the face, but there is no way to ensure that he does actually do it if he gets the properties.  A foreign buyer, on the other hand, is legally obliged to deliver on such commitments.

We NZers are easily duped and
must have very short memories of our Knights
prior deeds.

Penguin will vanish like Happy Feet soon if they are dicked around much more , but the govt of the Long March has long memory

Surely, in order to have any meaningful debate it is necessary to know the following

Theres a list of all farms and a location map here in the photo gallery from the original Bayleys listing...
http://www.bayleys.co.nz/4100069#

Kate: Any chance you can do your magic and find the original crafar purchase prices?

Very strange - looks like the Bayley's site is down at present?

Drat - the Bayleys site is back up and all the property details are there ... but I don't have  access to the database anymore (well not free access anyway!) - hence one would have to go via Terranet and they've nearly doubled their prices for the Property Sales Report since last time I paid in 2008!  Previously $2.95 ... is now $4.95 ... nearly $80.00 to get the lot!
Here's the Terranet site in case interest.co.nz want to take out a corporate sub!  Very useful for property industry research purposes!
http://www.terranet.co.nz/terranet3/products/report_detail/property-sales