Bruce Wills says farmers have no problem taking responsibility when something goes wrong, but that should apply to bureaucrats too

Bruce Wills says farmers have no problem taking responsibility when something goes wrong, but that should apply to bureaucrats too 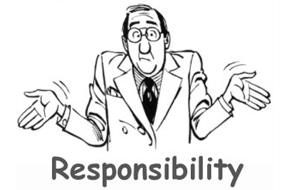 Why can't council or government bureaucrats take responsibility when they stuff up, asks Bruce Wills.

The proverb “for want of a nail” has been around for centuries and reminds us very small things can have very big consequences.

In 1918 a certain Adolph Hitler was injured in battle and for want of a few millimetres, our world may have been a very different one.

The proverb neatly sums up the fiasco that has been New Zealand’s handling of meat documentation for China.

Something as simple as a slip up in paper work was enough to incur hundreds of thousands of dollars a day in costs.

Having the wrong name may sound like a small matter, but try to fly internationally if your ticket does not exactly match what’s in your passport.

Even TVNZ’s Q+A  has strayed into this ‘meaty topic’ and it was fascinating to watch Charles Finny, journalists, a ‘political scientist’ and CTU boss, Helen Kelly, deduce why. Predictably, Helen Kelly blamed it on ‘job cuts’ while the rest focused on Nathan Guy’s uncompromising handling of his own Ministry.

No one asked what had happened to public service accountability.

Farmers cheered on the Minster for expressing emotions as we all felt.  We’d been ankle-tapped by our own side.

Contrast this with the fining of Milkpride for breaches of animal welfare.  All of the key personnel were named and as punishment is concerned, you can argue the publicity far outweighed the fine.

When farmers appear in court for breaches of the Resource Management Act, they are also publicly named and held to account by newspapers and even television crews.

So what about the much lighter coverage of Wellington City Council losing over 6.2 million litres of sewerage into its harbour, or for that matter in adjacent Porirua City, where its harbour’s water quality has continued to decline.

Are these somehow lesser matters?

Yet for all of these ‘public’ transgressions, no individual will be fingered or held to account by the courts,Campbell Live or environmental lobbyists. The exceptions, I must point say are the Manawatu Standard and CountryTV.  Both have both asked tough questions of farmers and local government as they should.

Why is one section of the community held so publicly to account yet another serving the public hides behind layers of bureaucracy or that golden excuse of a ‘systems failure’.

The millions of dollars in port fees up in China will take a painful bite out of returns for farmers in a hard drought hit year where every cent matters.  Yet it pails in importance when compared to the damage the meat fiasco has caused to our wider reputation.

The most basic tenet of selling is that the customer is always right. My concern is that New Zealand has forgotten that but instead believes our own crusading publicity.

Earlier this year, confidence in New Zealand was rocked in China by the nitrification inhibitor DCD. While DCD’s are safe, its discovery was a bolter for the Chinese.

DCD was used here because of a New Zealand imperative to inhibit nitrates from entering water.

DCD as a nitrification inhibitor was extolled by the Green’s Russel Norman and even highlighted as ‘green tech’.

Government ministers at the time lauded them but at no stage were our customers asked if they shared our same obsession.

If we had asked what was truly important to them, we would have discovered words like ‘safe,’ ‘wholesome,’ ‘nutritious’ and ‘trustworthy’.  While DCD’s remain laudable, a domestic policy imperative had rushed their application only to trip our reputation up later.

The reaction to DCD’s discovery should have shattered any ‘Pax Kiwiana’ mentality but it didn’t.

In March, a shipment of New Zealand apples was held up by Russian authorities for similar export certification issues which struck later in China. Someone should have linked up the dots here.

New Zealand’s Ministry for Primary Industries, the very people we trust to get the paperwork right, had changed documentation without consulting our customers.  With shades of Aaron Gilmore, “we are New Zealand; don’t you know who we are?”

Both China and Russia are vast countries straddling distance and time zones.  It is deeply embarrassing to have the Chinese, our very customers, having tell us exactly where we got it so wrong.  We are meant to be professional but instead acted like rank amateurs.

What also alarmed me was the shrill reaction of politicians and sections of the media who seem to delight in this controversy.

I understand politics is a blood sport without the blood but there was a disconcerting lack of ‘NZ Inc’ here.  The time for recrimination is after a dispute has been settled and not right in the middle of it where what is said here is being reported up in China in real time.

We will only move forward once we understand and accept that NZ Inc messed up and messed up badly.

That starts with the Ministry and our public service.

Bruce Wills is the President of Federated Farmers. You can contact him here »

We will only move forward once we understand and accept that NZ Inc messed up and messed up badly.
That starts with the Ministry and our public service.

Bro, you've been missing in action. The only ones on power who have to take responsibility are the stupid or the very unlucky.
And when you took 'responsibility' for your stupid farm accident (your term, if I remember rightly) did you have to up your ACC payments? Or was the mea culpa media column enough?

Oh please lets cut the B/S. Its about Taiwan and TPP.  Bruce knows it, or bloody well should.

As envisioned by the Obama Administration, the pact excludes China and would likely be comprised of the US, Australia, Brunei, Chile, Malaysia, New Zealand, Peru, Singapore, Vietnam and Japan. If the latter are included, the trade pact would create a regional economic group about 40 percent bigger than the European Union. But it is abundantly clear to Beijing that the push to create the grouping is not about the economy but about strategy.

With US co-operation already in place with the Association of Southeast Asian Nations countries, Japan and Australia would supplement American forces already stationed in the region. That extends their reach into the straits of Malacca, Sunda and Lombok, where most Chinese crude oil, cargo and ore pass through. Thus the agreement is regarded by the Chinese leadership as a hidden military alliance.

Needless to say, Beijing does not wish to see Taiwan, an island it claims its own, anywhere near that.

“Are you sure that you want to join the negotiations?” Wang Yi, director of China's Taiwan Affairs Office, the organ responsible for Taiwan-related policies, mockingly responded to queries by Taiwanese journalists.

“Taipei must reconsider the idea of forming closer political ties with the US and Japan through the negotiations. Taiwan's participation in the Trans-Pacific Partnership would be harmful to its trade pact with China," the Economic Cooperation Framework Agreement, or ECFA, Taipei and Beijing signed in 2010.

Ahh the real news hidden here while all the nonsense about housing dominates, thank you AJ. Those crude oil supply routes is the play to keep an eye on as the squeeze comes on the supply. I doubt the politicians in this country are smart enough to really grasp the full nature of our relationships with either the US or China. Our hand needs to be played very carefully but I suspect in the end the lack of foresight or strategy will mean that we get played.

“Yes, Minister, but not to the Chinese. In their eyes the People’s Republic conferred upon New Zealand the singular honour of being the recipient of its very first Free Trade Agreement with a modern capitalist economy. In very short order that agreement has made China New Zealand’s largest and most important trading partner. Laid before us are 250 million middle-class Chinese consumers, and the prospect of the People’s Republic becoming this country’s twenty-first century equivalent of the insatiable British market. Of Shanghai and Guangzhou becoming the oriental versions of Tooley Street and Smithfield.”

“So, perhaps, Minister, the Chinese are wondering if we really want a new Tooley Street and Smithfield. Perhaps, they hear Mr McCully waxing eloquent in Washington over the TPPA, and wonder if he’s convinced the USA’s about to offer us a much better FTA. Perhaps, Minister, the message China’s sending us is that if the Americans are now so willing to accept our agricultural exports, then China will happily leave them sitting on the docks for Uncle Sam to collect.”

The Government sat on the DCD information for months while it tried to manage the situation, thats a confidence builder, especially with food.