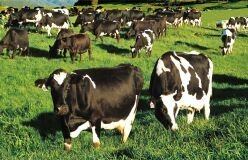 A week of unsettled stormy weather brought all the seasons together, with some rain for those in the right spot but not enough to saturate the dry soils.

Drought and irrigation restrictions are close in many areas of North Otago, South Canterbury and Mid Canterbury while in southern regions cold wet conditions prevail and the establishment of winter feed and growth of baleage is an issue.

In the North Island, eastern areas have rapidly dried out as relentless winds have sapped any moisture that has arrived and the Gisborne region has sweltered under record temperatures for this time of year.

The North Island western regions however have had plenty of rain and grass growth rates have breached the 40kg/dm for the first time this spring.

Milk flows for NZ, are 4% greater than last year, in Australia they are nearly 10% ahead, but in Europe reports reveal milk prices are in freefall, and some predict they will fall further when milk quotas come off.

More casualties of the downturn as Westland adjusts it’s forecast back 40c to $5/kg ms, and warns farmers to allow for price volatility in their budgets, driven by increasing global milk supplies.

Last nights auction results revealed the bottom has not been reached yet for Whole Milk Powders as they dropped to a new low of $2229US, levels not seen since July 2009.

Synlait announced their capital development had gone over budget by $50million and that this years forecast would start with a $4.

Fonterra is opening the second offer in December off it’s Guaranteed Milk Price scheme that involves 2% of it’s total milk supply, and many farmers will be regretting now not taking up more of the first offer.

Maybe this has something to do with the situation Thanks Fonterra

We got a lot of damage control to do get on with it.

"Sentiment, for now, has swung from New Zealand towards Europe," said a China-based executive at a large multinational infant formula firm who declined to be named because he is not authorised to speak to the media. He said that adding a "Europe" tag now gave products added cachet for consumers.

Giving Chinese consumers what they want will help global and local firms expand in the world's largest market for infant formula, where sales are expected to double from last year to $31 billion in 2017, consultants Euromonitor say.

Milk formula is also a gateway into China's wider dairy market, estimated to become the world's biggest by 2017.

European companies like Glanbia Plc in Ireland, Denmark's Arla Foods and Dutch dairy FrieslandCampina have lined themselves up to capitalise on this growth, especially as European Union caps on milk production will end next year, freeing up more capacity for export.

Beingmate, which is exploring a joint venture with Fonterra, said its premium product Green Love+ was sourced and produced in Ireland and that many of its mid- and high-end products were sourced from Europe.

"The proportion of European milk powder we source may change," said a Beingmate spokeswoman. "It all depends on what the market wants."

further to the above

The proportion of infant formula imports from New Zealand halved to 9 percent in the first nine months of this year compared to the same 2012 period, Chinese industry data shows. Fonterra accounts for the bulk of New Zealand's dairy exports.

Q: does this explain the full drop in volume, from the new year, or more the recall and ban period?

‘‘New Zealand is a dominant player in the Chinese market. But reliance on China is something farmers should be mindful of.’’

China was eager to build its own supply with large corporate farms growing aggressively, as it moved to reduce its reliance on New Zealand, Chen said.

then why aren't we selling to Russia?  I hear they're having issues with their usually suppliers...

I heard we don't make cheese product to the Russian specification.  Not all dairy is banned.  Basically much of our product isn't suitable.

The Russians tend to be flexible, and so we make sure we move the product they do want.

Isn't a good chunk of Beingmate owned by Fonterra?

Why would they be going to European milk powder, when we need to lift the price of NZ WMP?   What value is that to Fonterra supplier-shareholders??

As the piece says, we as NZers like to buy European cars thinking they are "nicer" so pay a big premium when in fact they are poorer made than "jap crap"  so rinse and repeat for the chinese on formula.

ergo Fontera supplying the chinese with what they want at a premium makes sense.  Then use NZ powder in markets that do not care so more premium is shipped to the chinese.

Global players thinking globally, of course the extra energy expernditure to ship across the world needlessly is mondboggling.

That would make sense, after all Europe likes to support it's businesses and exports not repeatedly rape them for election votes and extra tax revenues ... heck in those countires the taxes are used to _support_ agricultural progress, not hinder it.

NZ does not know how to increase its value of raw materials (i.e., whole milk powder) by leveraging on the clean and green image.

Fonterra needs to let its key customers know that milk produced in NZ is absolute GE free while milk produced from others are not because their cows eat GE modified corn.

This is a killer selling point no NZ companies is giving a damn about.

There are "millions against Monsanto".....they even have a world-wide organisation and web sites.......people are terrified the food chain is not safe......and we are not capitalising on it !!!!.....we are so damn foolish!!!

Retro Organic are on to it. They still have a non organic herd as well so would be interesting economic comparison.

One small problem is Fonterra accepts milk from cows being fed GMO's, and also cows fed silage, hay  and cereal crops made using roundup to force maturity in the crop.

They tested the effect of all that roundup by testing the bulk milk tanks at the dairy company, not the individual farmer's tank, so there was a huge dilution factor applied.

So the answer to farmers' questions as to whether Monsanto's roundup is coming through in the milk was not answered, altho' we can take a damned good guess...

And getting GMO free product is actually a bit difficult since silly Aussie went and allowed GE seeds to be planted over there...no-one guarantees the imported feed is GE-free any more. Or not that we have found anyway. So if you're feeding cottonseed, canola or soy to your cows, then you're likely feeding GMO's and roundup-sprayed produce.

We drink our own milk - and that PKE isn't half bad given what some of the options are!

Fonterra isn't interested in making NZ farmers any profits. That much is clear from the latest gDT round of WMP.  it's all politics, funds/shares and globalisation - all those benefits you mentioned are just another companies marketing issue.    Fonterra sells purely on price - hence the use of GMP to make farmers bid against each other for the lowest supply price

well GMP is betting against the pool, assuming all into the pool is in effort to maximise the price.

as an aside, the 18% - 9%, being 9% (referred above as being share knicked by the Euros) of whatever volume is not showing pricing thru GDT.

Q: how does lost of market share influence KPI's for the operatives

A Shanghai-based spokeswoman for Fonterra said China's infant formula market had always been competitive. "We are a large-scale supplier of ingredients in this category and we have seen continued strong demand from our ingredients customers," the spokeswoman added.

or is a shrugg of shoulders a la earnings lost to Colesworth homemarket supers?

long and the short of it.. its us suppliers who will be 4 it now dollarwise.

GMP is an auction system, so Fonterra just scoops up all the lowest bets.   You want decent return, your neighbour can dutch bid you lower, he gets his wish.

In theory they've already sectioned off that part of the contract pool, and pocketed the difference - the coop pool was never going to see that profit anyway.

It just goes to reinforce what I said last year.  $8.00+ bids weren't done to buy WMP, they were contracting for something else of much more important value, and if Fonterra can't lift the price somehow NZ and NZ farmers are going to be wearing the cost.

At the moment it is looking very likely the bank is going renege on their early loan level to me, but in this environment it isn't looking like a bad thing - especially if Simon was right and I can pick up some 3bd property in suburbs performing with >7% yield.  I've just being going off retail figures to have an eye on the market, but with the extra compliance crap that Fonterra isn't willing to pass on to customers, and lousy returns under cost, property is looking better by the minute.   And since the open home folks have had 4 open homes with zero foot traffic, looks like prices are going to soften in the buyers favour...

There is an intense battle for milk, with relatively stagnant local production for processors to get enough produce to fill contracts.

"That is fundamentally the biggest challenge and the biggest opportunity the industry has. "It's great to build more infrastructure, but you need more milk to fill it. "Otherwise, all the existing players will be competing for a smaller pool (of milk).

How do we get that person fired?

The difficulty we're having getting proper level of return (>6.50/kgMS) according to all sources is the oversupply of milk on the market.

We (the owners of Fonterra) _need_ the customers to be paying more on the gDT, and if Fonterra can't lift/set the WMP to a profitable level, then we need customers to perceive that demand is higher.
If Judith Swales does not understand her supplier-shareholders needs, she needs to be replaced by someone who does.

the chinese hold all the cards when it comes to milk price. Why would we let them build  milk factories in NZ and give them  the means to break Fonterra?