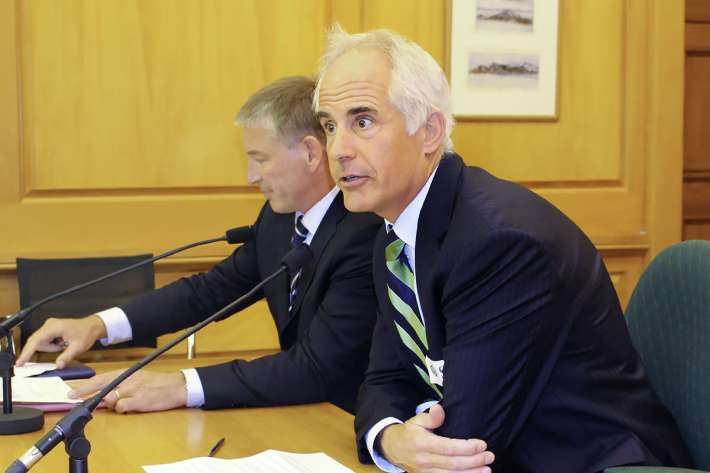 New Zealand’s meat and other exporters should follow the example of the dairy industry and consolidate in order to compete globally, former Fonterra CEO Andrew Ferrier told parliament’s Commerce select Committee on Thursday.

Ferrier, speaking in his capacity as chairman of New Zealand Trade and Enterprise (NZTE), said New Zealand’s major players needed to consolidate, or at least form “coalitions”, to take their products to the export market.

“We created a truly competitive global business in dairy and I enjoyed sitting in the seat and seeing the amount of market power we had around the world because we consolidated our efforts for exporting dairy products,” Ferrier said.

“Now, it would be helpful if we could encourage further consolidation of major players to become more competitive in the export market. It’s not something necessarily the government can do, but when we look at the meat sector, for example, there’s a great example where they could –and should, in my opinion – be looking for consolidation for success in the future.”

Ferrier said an alternative to the Fonterra model was for companies to compete domestically, but work together to succeed in export markets.

NZTE CEO Peter Chrisp added that NZTE, which assists export companies grow and market internationally, had “about 23 different coalitions in various stages of development that are going into market together,” including companies selling wine and mussels in China and security technologies companies marketing themselves in Washington.

“Ruthless competition inside New Zealand is probably a good thing because that hones businesses to be good, as long as they are competing by making their products more interesting to their customers and so on,” Ferrier said.

Ferrier told the committee that, without consolidation of industries, he saw three bottlenecks to further export growth: not having companies big enough to take advantage of the global marketplace; a domestic market that is too small; and not being able to offer investment opportunities large enough enough to attract global capital.

I presume that explains why Tatua does so poorly compared to Fonterra?

Right on.
I think AF may have a lot to offer NZTE but drawing lessons from Fonterra is not wise. The meat industry has  better prospects for attacking the  higher end of the market than dairy precisely because it doesn't have a Fonterra. Consolidation would drive out the innovation companies are using  to compete .
we are just starting to see what a problem we have in Fonterra the lazy giant. It's stuck as a large scale commodity supplier. It has supply chain efficiencies, but not much "market power", and constant scandals have massive impact simply because of its scale. Melamine, botulism and 1080 are driving it further into commodity supply and killing small agile NZ companies at the same time. Wehave all our chips on one number because of Fonterras scale.

Yawn, same old stuff nothing new. Do we pay these people?

When a commodity producer can say this with a straight face, there's something wrong in the world, especially when your suppliers are faced with %8 compounding cost inflation thats gone on for years and years.
“We created a truly competitive global business in dairy and I enjoyed sitting in the seat and seeing the amount of market power we had around the world because we consolidated our efforts for exporting dairy products,” Ferrier said.
Hows all that power working for us now?

Just like the Australian Iron ore business but with less control over costs.

We need to get "real" value for our meat, not a price a more powerful coop can extort from customers. It's the way the world wants to go with government controled economies through printing money, over regulation etc., councils wanting to form supercities. it does'nt have a lot to do with free market.

True. I guess they can make a case for anything, until it comes to fruition the reality is hard to pinpoint. What really bothers me is the space issue. We have to keep a large kill capacity. Dumping milk is one thing. Dumping carcases would be awful. The wait for kill space this dry season has been a long one. It would be hard yakka if this got worse. Any benefits from consolidation would be down the gurgler.

Good morning aj. Anyone would think we had cows to milk.

DST has kicked in in California, but we just had two days of rain and snow in the hills so who's complaining.
Hows the beef shedule holding up? The feedlots are buying more and more Holstien bull calves, I have no idea how that ends for us, but I'm thinking more dependence on China.
I found an article about back brusing caused by holstien steers being so much taller than Angus x that feedlots were needing to adjust races making them higher. I've included link below.
The feedlots are masters of secrecy but they make the odd slip.
Michigan had 112,000 beef cows and 403,000 milk cows on Jan. 1. Given the high percentage of Holsteins in Michigan feedlots, both numbers are important to our feeder cattle supply. Michigan had 160,000 head on feed as of Jan. 1.

This burst of $6.00 plus on the schedule last year has disappeared. I think its a bit over 5 at the mo. It seems to have everyone thinking they are bullet proof though. The weaner fairs have gone airborne. Good for the breeders at last. If the states manages to get to grips with bull farming it will be tough here. But I wonder how they will grow lean bulls by feedlotting. Isnt it the leaniss of the meat they are after for hamburgers. Which requires pasture feeding. I think Oz tried n failed. I hope your house is battened down back in the hawkes bay Aj. Looks like Pam is on her way.

How can Ferrier understand the requirements of a sheep and beef farmer. Yes we need top managers to look at our systems and make suggestions. Equally we need to think about that advice critically. Fonterra is a giant beast. It wallows from disaster to disaster at the moment. Much not of its own making. Do we want another behemoth as a target. No thanks.

Belle, its an interesting world, I see dairy farmers in Australia are getting $6 a kg still
http://www.nzherald.co.nz/business/news/article.cfm?c_id=3&objectid=1141...

In Tasmania Fonterra is also paying $6 a kg and also offering substantial cash incentives to attract new customers. Stranger things have happened but it must be causing friction amongst NZ shareholder/suppliers.
Perhaps CO or HenryTull could enlighten me on whats going on over the ditch.

Hmmmm - I see that even our own still believe it is necessary to pay tribute to the neighbours across the ditch. What is it with this "lucky country" that allows their citizens to demand and get the indefensible against all odds - when is Key going to give us a cogent explanation or are we too stupid to understand the implications of this as well?

And they get cheaper milk in the supermarket
https://keithwoodford.wordpress.com/2014/04/02/why-is-new-zealands-retai...

The headline here is code for: "We want the monopoly, government patronage and corporate welfare that fontera has got from its Dairy Restructuring Act 2001."

Who is we?  Currently you get stock trucked from Southland to Hamilton to get an extra couple of cents per Kg, the current system is incredibly innefficient.  None of the processors are in it for the farmers.  The dairy industry wasn't quite as bad as the red meat industry is.  I fail to see who gets hurt by this?  The funding comes from the farmers, in return for a more solid presence in the global market.

So we just throw the free market out and go for some kind of monopoly. The trucking issue is an easy fix, in the South Island farmers pay freight in the North the companies do, just make athe North like the Sth. If a North Island company can afford to pay the freight, it says a lot about how low schedules are in the south and it is also competition at work.
The North Island has lot more privately owned works and less dominance by SFF and Alliance.Yet the beef schedule is often way ahead of the Sth and often lamb too.

You mean the "corporate welfare" thats forces Fonterra to sell milk at under cost of production to it's local competitors??
akak  DIRA milk

And results in very well paid CEO's, can you remember the size of Ferriers golden handshake? was it 4 mill bringing his earnings in one year to 8 mill? my memory is hazy.