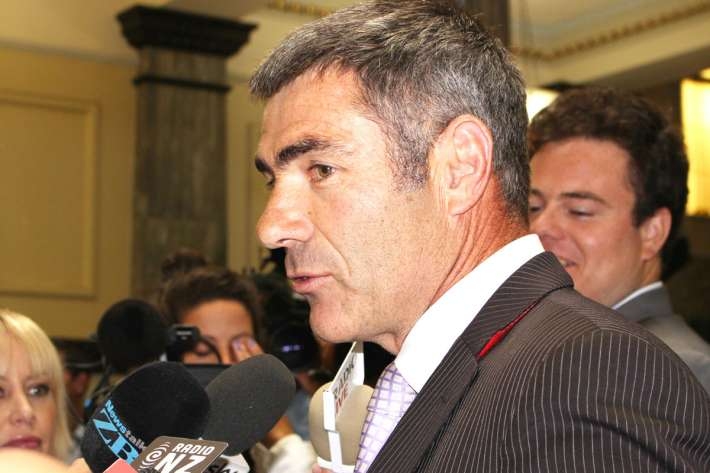 Guy has also rejected calls for the Government to lead any consolidation in the same way the 1999 Labour Government pushed through the legislative and other regulatory changes needed to create Fonterra in 2001.

Speaking after the release by the Meat Industry Excellence group of its "Red Meat Industry - Pathways to Long-Term Sustainability" report, Guy said the Government would wait to be presented with a single, coherent proposal before taking any action.

Guy said he welcomed the report and said it may act as a catalyst to create more momentum, but that the meat industry was much more splintered now than the dairy industry was in the late 1990s and that farmer appetites for such consolidation tended to ebb and flow with returns.

The report said a consolidation of the industry could save NZ$444 million a year in processing costs. It estimated savings of more than NZ$400 million if the South Island-based Silver Fern Farms and Alliance Group Co-operatives were to combine, while savings of over NZ$1 billion were possible if Silver Fern Farms, Alliance Group and the privately-held ANZCO and AFFCO agreed to a coordinated consolidation.

The report recommended the creation of a 'Big Red' holding company to park redundant plants and arrange plant closures, and it said the Government had an essential role in enabling the consolidation.

'No coherent proposal yet'

Guy said just over 50% of the meat industry was in cooperatives, which was much less than was the case with dairy industry in the late 1990s in the lead up to the creation of Fonterra..

"This report is a good opportunity to go and have that discussion with farmers and with processors," Guy said. "Obviously the size of the prize is large, but this issue has been around for a long period. It's a matter of getting everyone in the room and getting a coherent plan and that will take some time," he said.

Guy questioned whether there was over-capacity, given farmers had told him in recent weeks it was taking 3-4 weeks to get their stock into plants.

Asked if the Government should lead the process, as the 1999 Labour Government coordinated and pushed the creation of Fonterra in 2001, he said: "I don't think we should be front and centre on this one. I've always said my door is always open if there is a clear, coherent plan going forward, and I can't see one that's joined up with farmers and processors at this time."

"The indications I'm hearing is they're working closer together than they have previously, which is a good sign," Guy said.

"This has been around for long time for farmers. It often mobilises when returns drop away a bit. Returns for this year have been above the normal, so I'll be interested to see what farmers think of this report and how they can mobilise some momentum for change," he said.

Labour Primary Industries spokesman Damien O'Connor said the the Government needed to show leadership and take action from the report.

“This report offers direction and no concrete answers, but leaves the pathway for central government leadership to bring about the co-ordination and restructuring needed," he said.

“This invaluable report has only eventuated because of the commitment of the Meat Industry Excellence group and it’s now time for the Government to deliver for its rural constituency.”

Farmers are presently wearing the cost of the lack of industry cohesion.  The problem is that it isn't quantified. If they continue down the track they are on with a lack of action and restructuring then there cost will esculate.  Ultimately a lack of industry critical mass will cause a nose dive to industry collapse.

farmers (part of farm "industry") aren't part of the standard Industry discussions.  Mostly because the interests are too diverse.

So the answer is Nationalisation?  Without the surplus capital invested in the industry the drought this year would have been a lot worse and seen a lot of animal suffering.

The problem is some of the weak players have not been allowed to go bankrupt but hang in there year after year.

Fonterra has a very different product that keeps well and has farmer shareholders with significant financial investment in it.  Milk is seasonal but nothing like the meat industry.

I don't believe Fonterra is going to survive in what is becoming a highly competitive export market, that it once had almost to it self.

The sheep industry hasn't recovered from the shift away from the traditional UK lamb roast, that happened in the 70's. Many people are happy to eat Prime french rack but not so keen on shoulder roasts, large back leg roasts, the smell of ram lamb cooking and old ewes.

I don't see a bright future for the NZ sheep industry, eating habits have changed, thats why the bull beef market in the States has been so strong for so long, its reflecting the increase in hamburger consumption.

Venison has a similar problem to Lamb, not enough of the animal goes prime, in deer it's about %20.

Given the world consumption of beef and sheep meat not increasing as fast as the consumption of dairy, poultry and seafood, I struggle to see there would be any bright future for the sheep/beef sector in New Zealand, even after addressing overcapacity, industrial structure, and other issues etc.

Bull. We have a resiliant industry and we will keep trucking along. People love meat. Nothing quite like a steak cooking or a chop. Mmmmm mmm. When the medical fraternity win their battle against antibiotics in the pork and poultry industry suddenly we wont be the ugly duckling.

I think you will find there is a demographic thing going on in the developed world, ie "we" will be eating less red meat both due to cost and choice.  However the developing world is 3 times the population and has a growing middle class who wish to more than make up for "us" eating less.

Considering our numbers have been slashed by defectors to dairy and dairy grazing I reckon us that remain have a good future. The only fear I have for us is f and m or some other rotten virus causing us grief. Note I cant bring myself to write the words.

Some countries have wine co-operatives  who buy up all surplus grape juice production .

It is about taking a huge amount of cost out of the system that is not adding any value, for example cutting freight costs by sending stock to the nearest processing facilities, cutting out payments to third parties & shutting under utilised plants.

Interesting that some plants in drought areas couldn't  operate to full capacity because of skill shortages. We need efficient plants working 24 hours a day in peak kill.

Good on MIE for quantifying the costs & benefits, farmers need to get behind this & drive efficiency which will ensure greater profitability in their pockets not someone else's.

The Alliance Group Chairman is sceptical about the figures and assumptions in the Meat Industry Excellence sponsored report. Otherss do not believe their claims of overcapacity given the current long processing delays.

The problem with Meat Industry Excellence is that it has only one solution and that happens to be the wrong solution. At this time its proposed merger between the Alliance and Silver Fern Farms poses a severe risk to the survival of the Alliance Group and the collapse of both companies would be damaging to the whole industry.

Silver Fern Farms is in no fit state to do any merging. The Alliance Group know this and don't want a bar of it. On the other hand, I suspect that the Meat Industry Excellence lobbyists also know this but are prepared to push for a very dangerous merger in the hope that it might save the hapless Silver Fern Farms. I hope it survives, but its failure can not be allowed to damage the other healthy companies.