Farmers plan to cut spending to GFC levels as low prices, drought and costs bite. Seek "support of banks" for help with debt 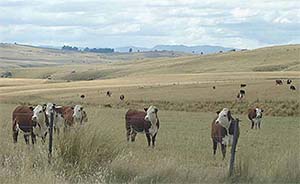 Pessimists overwhelmingly outnumbered optimists for both the economy in general and farm profitability.

World dairy prices are in the doldrums.  Fonterra’s initial forecast for 2015/16 is $5.25 per kilogram of milk solids (KgMS) up $0.85 on its initial forecast the previous season.  However, with the Global Dairy Trade continuing to fall since the opening forecast was made and overall down 34 percent since March, the forecast is looking more and more challenging. Most dairy farmers expect their profitability to worsen.

Farmers on the East Coast of the South Island experienced a drought this past summer.  Sheep and beef farmers have sent stock to slaughter early.  That, and a higher than usual dairy cull cow kill, increased supply at meat processors and reduced schedule prices.

Production expectations, which were hit in January by the drought and by the low dairy payout, have also eased back further in this survey, although remain positive.

A silver lining has been a 12.5 percent drop in the New Zealand Dollar since April.  This should act as a buffer to weak world prices.  There could fall to what would be more of a ‘fair value’, given the 25 percent fall in world commodity prices since March 2014.

Pessimism about profitability is reflected in farmers’ spending intentions. A higher proportion of farmers expect to reduce spending to levels of sentiment not seen since the Global Financial Crisis. The intention to close cheque books is especially strong among dairy farmers.

More farmers expect to increase debt than reduce debt.  The support of banks will be important over this challenging period.

The agricultural labour market remains tight but appears to have eased slightly since January. Slightly fewer farmers report it is harder to find skilled and motivated staff.

The biggest concern for farmers is commodity and farmgate prices, cited by nearly 37 percent of farmers. This was followed by regulation and compliance costs, with 17 percent, the weather, with 13 percent, and industry specific issues, with 11 percent.  A jump in concern about industry specific issues reflects farmer dissatisfaction with the performance of Fonterra and the meat industry.

Farmers’ highest priority for the Government is regulation and compliance costs.  More than 24 percent either mentioned it generally or raised specific hot topics such as health and safety and the RMA.

As with the last survey the overall results mask both industry and regional variations, and these are discussed in the report.

The headline results from the Farm Confidence Survey:

My rural bank advisor has already been moved off his dairy accounts. Usually that is the first sign of toughening up. Take away the kind lending faces, bring in the mean guns. Good luck for tonight people

13% drop in WMP....This is another shock that will further dent dairy confidence.

Luck did't get the memo.