The Weekly Dairy Report: Reality bites with Fonterra's $3.90/kg ms for this year and prediction next will also be tough

The Weekly Dairy Report: Reality bites with Fonterra's $3.90/kg ms for this year and prediction next will also be tough 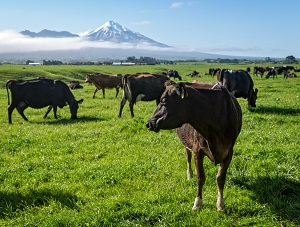 March has started like February, hot and dry, and some dryland areas are returning to the tight feed conditions of December after above average temperatures and no rain this month for most of New Zealand

Rain is predicted for this week but with soils very dry, large volumes will be needed over the month to have a significant effect on pastures.

Pregnancy testing and performance are being used as culling parameters and numbers are still flowing into the saleyards as managers fine tune their herds to carry only the very best animals.

Numbers of genuine productive cows offered for sale is increasing as sharemilkers look to exit the industry and prices are easing with few optimistic enough to purchase.

Unrecorded cows are now selling under a $1000/hd and many quality recorded animals can be purchased for around $1600 for those with the courage and money to upgrade.

At last some signs at last week’s auction that the bottom may have been reached as the basket of milk commodities rose by 1.4%, lead by whole milk powder which lifted in price by 5.5%.

While some analysts see this as just a blip in a downward trend, others believe more interest from China and lower auction volumes will be helpful in starting a long slow upward trend.

However, yesterday that optimism took a large blow with Fonterra lowering the payout to $3.90/kg ms and warning of a slow recovery for next year.

They plan to make a further announcement on March 23 that suggests some further assistance for it's shareholders, and need to report details of it's financial performance as criticism builds from some analysts of the growing debt load the company holds.

This may be the final straw for some working hard for no return, and all lenders will be examinng their dairy portfolios to evaluate exposure to this downturn, but care will be needed as a sharp fall in land values will put pressure on many more in the sector.

The European Union predicts milk output from that region will continue to grow in 2016 and 2017, lead by Ireland, Denmark, and Holland and globally it is estimated the production rise is 3.5m tonnes of milk solids, but increased demand will only handle under half this volume.

EU officials have responded to criticism that this over production has been caused by farmers from their area, by reminding the rest of the world that NZ's milk flows have increased by 36% over the last 8 years compared to the EU's 10%.

Landcorp are also feeling the heat with their large dairy portfolio unhelpful in the reported 6 month loss, and the curtailing of the forest to dairy development is sensible given the present market and environmental implications.

Fonterra have also been criticsed for delaying it's payment responsibities to 90days for those larger firms that supply services to the Co-Operative, but such has been the outburst in the rural community this will have far reaching effects to many.

Ravensdown has lead with further cuts in the price of Urea by $20/tonne that will see this fertiliser at it's lowest value since 2007 and be some help in lowering costs on farm.

ACC backing the Ruataniwha dam?
http://www.radionz.co.nz/audio/player/201792666
water cost is up.

lots of locals getting angry about this dam, also Info coming out about flow rates scares farmers who worry it won't be there in a dry year.

Reading it the idea is there will be more water in low periods as it can be released. My only conclusion is then farmers are saying it isnt big enough? Or maybe, just maybe relying on extensive irrigation is the wrong farming technique for the region?

AJ, an individual example of the issue you have been clearly describing.

He said he had been paying Rabobank interest rates ranged slightly over 9 percent on a loan for irrigation that was $4.7 million by December, and was closer to $4 million today..

He should apply for one of Fonterra's interest free loans to go organic. That is just what I was talking about savage interest payments while the banks get deposits at record low rates.
Finance is the business to be in, get yourself a nice calf skin leather chair, sit your posterior down in it and watch the poor little buggers work their heart and soul out to pay you.

A huge part of problem in farming stem from enforced costs by the State....how many billions of dollars are spent annually in compliance and when a farmer has to borrow to meet the requirements then it is a case of eventually the shite will hit the fan.....the fact is how many bureaucracies ever report a downside or have models that allow for 1 in 10 year...1 in 2o year events....every farmer knows their will be swings in prices but the vultures are constantly allowed to keep circling.......the right to take care of yourself and business has been buried under the weight of Government policy and agencies.....

News is rolling out today.
http://www.nzherald.co.nz/business/news/article.cfm?c_id=3&objectid=1160...

Where are Ngai Tahu going to get enough beef cattle to fill up the Eyrewell development. Add in Landcorps need to stock the Taupo farms with something. On top of that in Canterbury there is thousands of hectares of irrigated fodder beet and kale which was meant for grazing dairy cows this winter. Dairy farmers don't have the finances to graze off farm and most have reduced cow numbers and put in a wintering pad on farm. Wish I had more beef calves to sell, going to see some expensive weaners this year.

Not to forget the old Balmoral forestry that is 9,500 ha + table top in the Culverden basin. (Not tiger country as implied by the article).

Lucky kale is a superfood, we'll all be salading up / and vegging out....

Store beef prices are pretty looney. The meat companies must be praying for a dry autumn. The dairy beef calf retention will be pretty big this year. A lot of drystock farms will be desperate for stock. Interesting times. What a turnaround. Trading was sooo good til about 8 months ago. Better head off to order some milk powder.

Milk is a cyclical commodity, and prices have been low before.

Historically yes, but China has persistently exported deflation to the US for the 18th month in a row.

US Import prices fell YoY (down 6.1% vs expectations of a 6.5% drop). This is the longest deflationary streak since 1999. Under the hood we see the first first rise in prices (ex food, fuel) since May 2014. Fuel price dropped 3.9% - the 8th consecutive drop - and foreign food product prices dropped 2% - the most since Feb 2012. Perhaps most crucially, China's forced deflationary wave continues to build with the index at its lowest since 2010. Read more

Would love to know how many driers the Chinese have set up in Europe....

Here are 3 in US
http://www.dairyfoods.com/articles/90296-to-meet-world-demand-for-milk-p...
Not sure if these include the one built by the ex Fonterra fella on the US West Coast or there abouts.

Look thru China industry broker research also to see the build out.

European dairy producers continue to call for financial relief, but they are not meaningfully slowing production.
In January, Irish milk production was 19.5% greater than the year before. Output was up 15.5% in the
Netherlands, 13.8% in the Czech Republic, and 7.9% in both
Poland and Belgium. Manufacturers once again offered large
volumes of SMP into the government’s intervention purchase
program. European dairy product prices continue to slip.
Fonterra once again lowered its pay price, this time from
$4.15/kg of milk solids to $3.90. After dividends and retentions,
this is roughly equal to Class III milk around $9/cwt., well
below the average cost of milk production in New Zealand.
After two years of negative cash flows, New Zealand’s dairy
producers are heavily indebted and feeling the pinch.http://www.milkproducerscouncil.org/updates/031116.pdf