The Weekly Dairy Report: Managers battening down for the long haul as an upturn seems a long way off

The Weekly Dairy Report: Managers battening down for the long haul as an upturn seems a long way off 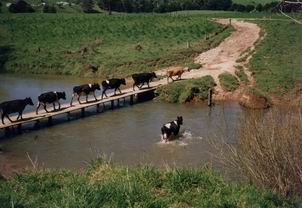 The top half of the North Island and the West Coast has good soil moisture levels, but the rest of NZ, although they have had good rains in March, are all suffering from dry soils.

Temperatures are cooling in the south, and autumn feeding plans are being made for some to accomodate winter as cost pressures have ensured the cows are being held at home.

Others are trying to talk down the grazing rates in areas of plentiful feed, but at below 20c/kg DM other alternative stock systems may be more attractive.

A strong outbreak of facial eczema has been reported in the Tarankai region and managers will need to use all the tools avaliable to prevent this disease having an impact on future production.

Cow numbers are being trimmed and trimmed again as only the most productive cows are being kept, as managers try to make their systems lean and mean and efficent as possible.

Many farm owners have had to go back into the milking shed as staff numbers are trimmed and immigration rules are tightened, and some commentators are concerned that gaps in skilled labour will occur when the turnaround arrives.

The market news was dominated by Fonterra’s 6 month finance announcement with a significant lift in predicted profit on the back of the low prices for milk.

They raised the dividend return to 45-55c per share, and announced they would pay 20c early in April, and two 10c payouts in May and August, to help fill some gaps in farmers cash flow budgets.

On it’s own this will be nowhere near enough for most, but this positive news and Fonterra’s plans to lower debt to 40-45% by the end of the financial year, will be a welcome boost for farmer morale.

Although not all analysts agree, they predict global dairy prices will lift by the end of this year on the back of increasing demand from China and a production fall from Europe.

Dairy farm values have fallen by 20% in the latest REINZ index. and it is reported 35 farms are under bankers supervision in Southland.

Water quality continues to be an area for discussion and under these tough financial times farmers will need to farm smarter and those that invested early and wisely to address these issues will be starting to see results in nearby streams and rivers.

so we are half way there?

Quin and Westland chairman Matt O'Regan have recently returned from Europe where they met with customers, farmers, processors, traders and industry advocates.
"The clear and consistent message we received is that European milk growth will be higher and more aggressively promoted by European farmers and processors than expected, both within Europe and, more concerning to New Zealand, the international markets.

"The effect of this is likely to be a longer time frame for the downturn in prices; expected for another two seasons. This will lead to relatively lower payouts and a resulting impact on New Zealand dairy farmers," Quin said. European farmers were benefiting from low debt levels and fewer environmental pressures.

the 'co-op' has another idea.

https://www.fginsight.com/news/significant-eu-milk-price-recovery-not-ex...
Other sources say an increase in prices is not expected until 2021.

Yashili introduced an era of ”new domestic product”. The launch of originally packaged products from the New Zealand factory will help reshape and upgrade brand image.

Leveraging on the premium milk source and high standard factories in New Zealand, the Group has developed the imported infant milk formula product series such as “Super α - Golden”, “α - Golden”, “Ambery Golden” and “Ambery”. Such initiative has diversified product lines and strengthened product quality, thereby laying down a solid foundation for providing products with quality and safety assurance to consumers in China.

And from Modern Dairy
http://www.moderndairyir.com/hongkong/01117/announce/290/EN/E%20CMD_JehF...
page 20/21:
During 2015, selling prices of raw milk remained weak in consequence of various pressures from oversupply, inventory and large scales of imported bulk milk powder and reconstituted milk flooded into domestic market. Reconstituted milk at very low cost was sold as good quality products by some profit-seeking manufacturers.

As raw milk was rejected in many areas, sometimes dairy farmers had to dump milk and kill their cows for cost saving. Dairy farmers will face further challenges in view of the fact of their small scale and limited technologies against the environment of downward price and more strict quality requirement.
....

With the stable and sustainable economy development, and driving by the two positive policies of “the 13th Five Year Plan” and “Two Children Policy”, the dairy products industry sees an enormous potential with rising demand for high-quality dairy products. To meet the demand of market for quality, the dairy farming industry in China has also undergone a structural transformation from a free-range mode to a large-scale and intensive development mode of modern range. As the dairy products market system increasingly develops, the use of reconstituted milk will be regulated.

Despite various challenges ahead, we believe the domestic demand for high-quality dairy products will remain strong, the raw milk price will rebound and stabilized, and eventually, the whole industry will embrace more and more business opportunities.

And Mengniu (part owner if Yashili and Modern)

With increasing per capita income and the progress of urbanization, the rise in consumption standard has in turn resulted in the upgrade in product structure; the enhancement of consumers’ nutrition and health consciousness has also led to a faster growth in product categories such as high-end UHT milk, room temperature and chilled yogurt, pro-biotic drinks and infant milk formula compared to the overall industry.

Not so much sacred things knocked off, but still giving the investment theme a kick.

Investor concern
Investors have been concerned that China's new tax will dent demand for the likes of Bellamy's, Blackmores and a2 Milk, which have all benefited from Asia's fast-growing middle class.

Bellamy's shares have fallen 31.2 per cent so far this year, after soaring more than 720 per cent in 2015. Meanwhile, Blackmores – which has launched an infant formula partnership with Bega Cheese – has fallen 19.4 per cent since early January, and a2 has lost 8.5 per cent in the same period.
http://m.smh.com.au/business/china-tax-wont-have-an-impact-on-demand-say...

But fits with middle kingdom industry comment.
P.S. 7 to 10 day shipment of 1kg pack (say any branded product) from Oceania region to any major Chinese city costs round $8.00 (via china post coy types).
any lang student will show you how.