The Weekly Dairy Report: A biosecurity alert and a slow turn around predicted due to big European milk supply

The Weekly Dairy Report: A biosecurity alert and a slow turn around predicted due to big European milk supply 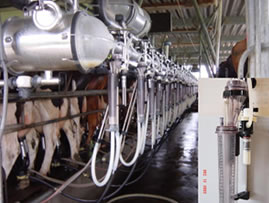 Autumn continues to be dry along the east coast of both islands although plenty of grass is being grown in Taranaki, in the Waikato and northern regions, and in Southland.

Pressure is on biosecurity officials to find all the velvet leaf weeds before they shed seed as this border indiscretion is bigger than first thought.

Farmers are being urged to recheck crops as there is now some evidence that late flowering weeds are emerging after the first inspection.

Another dairy auction last week and still little indication the market has moved off the bottom as the small rise was negated by a firming currency.

Analysts are issuing conflicting reports about when this price downturn will be reflected in lowering global supplies, with the influential European milk growth still unabated even at these unsustainable returns.

The more pessimistic suggest it will be only at the start of the next European milk season that  evidence of milk volume cut backs will be seen, and additional time will also occur with the sale of this extra supply.

The implications of this means NZ farmers may need to plan for no price turn around until well into 2017 and some with debt that could be too long to wait.

NZX plans to offer milk futures to its existing dairy product offerings and if farmers believe the risk of price volatility is too great on their business,they may have to learn the skills to manage trading in this area.

Westland announced the opening of their UHT plant in Rolleston Canterbury as they look to add value to the product by selling raw milk and whipping cream. They state the added value investment has already added 20c/kg to the payout and predict more to come.

After reading the the latest NBR article,which is a comparison between the performance of Fonterra Australia and Murray Goulburn.
The whole 17500 staff should lower their heads in shame.
This is the most embarassing report I have ever read.