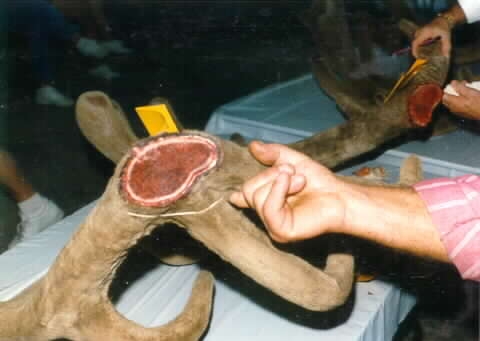 Stable venison schedules this week, but uncertainty in Europe and the strenthening currency has cast a shadow on earlier optimistic price  prospects for venison.

Velvet returns for last year were revealed at a very strong $125 a kg and with increasing volumes, these prices will only be maintained if more product can be consumed into the healthy food sector.

The Advanced Party farm system is growing and gathering pace and has now exceeded it's original targets, and the challenge now will be to ensure the on farm findings are followed by the wider industry, to improve profits and reignite growth.

Export schedules continue to disappoint with further winter easing as processors grapple with how the changes in Europe  will affect the sheep meats market.

Processors have stated NZ is lucky with the timing of the vote, as at present trading is in the off season period with little uncomitted stock on hand, and the market will have time to transition before big numbers arrive next year.

Currency is still driving this uncertainty but companies are hopeful shortages in the Middle East and an improving Chinese market will ignite this trade soon.

There was however a good lift in South Island local trade lamb prices, as stock shortages in the south, pushed values above the north, and ahead of last years returns.

Store lamb values in the south have also risen on the back of this short supply and vendors are receiving nearly $20 a head more than a year ago.

Silver Fern Farms have reached an agreement with Shanghai Maling for an extension to start their partnership on 4th January 2017, if they get OIO approval by 30 September this year.

A meeting in early August will test the support of the opposition to this deal, but nothing in the status quo suggests “carry on as normal” will improve prospects for this sector.

ANZCO’s results were reported this week and failed to inspire, so the opportunity to sell into a huge Chinese supermarket supply chain proposed by the new meat partnership, would be brave to ignore.

This weeks Sheep Industry awards showcases excellence within the sector and provides a yardstick for many to improve profitabilty from farming this animal.

WOOL
The final South Island wool auction for the season saw the market finish on a very disappointing low, with all indicators at the bottom for the year.

Only two thirds of the offering sold, as weak Chinese demand and the currency, which lifted 9.3% against the British pound, weakened the market.

Wool has this year, had a worthwhile contribution to sheep farmers returns, so the fall in the market is double blow to this sectors profits.

It is interesting to note that farmgate bull prices are rising at the saleyards, as export values are falling, and early sales of 100kg Friesian bulls have been making well over $5/kg in the Waikato.

In the southern saleyards noticably less cattle are being offered due to heavy autumn trading, and more recently the mild winter and low stocking rate allowing managers to farm conservatively with the stock they have.

Rabobank predict the current weakness in the fertilizer market will continue, as prices for Urea and DAP are the lowest seen for years.

They also state they believe farmgate prices for beef will continue to strengthen, but how far will be dependent on the US market that is now awash with all types of meat.

Tony can you explain why SFF needs to sell control of their co op to sell meat to Shanghai Maling or to China in general? Alliance have a long standing JV in China and they are still in full farmer ownership and control.

Funny how "carry on as normal" has been portrayed as unsustainable to NZ farmer shareholders but the figures supplied to Shanghai Maling show a company with strong forward earnings guidance. Figures that SFFs own shareholders were not given access to before they voted and have only been uncovered subsequently by a third party. The more I look at this deal the more it looks like shareholders have been taken for an absolute ride. The OIO are a joke if they allow such a shabby process to be allowed to stand.

However the global beef index shows signs of dropping again as softening prices in the US and Canada battle strengthening prices in Australia and Brazil, the report said.

I think it would take an 'event' to bring down the beef price. As so much beef is destined for China now it should provide some security like it did to dairy.

In a recent interview with MarketWatch, Xie said China’s trajectory instead resembles the one that led to the Great Depression, when the expansion of credit, loose monetary policy and a widespread belief that asset prices would never fall contributed to rampant speculation that ended with a crippling market crash.
China in 2016 looks much the same, according to Xie, with half of the country’s debt propping up real-estate prices and heavy leverage in the stock market — indicating that conditions are ripe for a correction.

“The government is allowing speculation by providing cheap financing,” Xie told MarketWatch. China “is riding a tiger and is terrified of a crash. So it keeps pumping cash into the economy. It is difficult to see how China can avoid a crisis.”

And feed prices are holding up nicely

I counter your question with, what evidence is there that the current model is worth pursuing in the red meat industry? Farmers have been abandoning the sheep sector with this years sheep numbers predicted to be the lowest for 72 years,  according to Statistics NZ !!

Profits again fell for Sheep and Beef farms reported Beef and lamb NZ, and Silver Fern Farms proposal to get farmers to inject more capital into it's company a few years ago, was a dismal failure. The banking sector has made it quite plain they are no longer prepared to fund the processing sector like they have in the past, so where is that capital going to come from?

Brexit has shown the sector is now exposed to more market pressures so this new venture I believe is even more important than before. No comment was heard from the anti overseas investment protagonists in the changing ownership of ANZCO.

Concern has been expressed about loss of control by shareholders of SFF but I believe they have ultimate control in keeping overseas ownership in line, and that is by deciding who they send their stock to. Operating under such slim margins as livestock farmers do, most cannot afford to support any processor that is not competitive.

This new venture will give farmers a variety of choices who to support and the most efficient will drag the others up to compete, and any enterprise with very little debt has a huge advantage to start with.

While I am personally opposed to just about everything in this country ending up being owned by foreigners, Silver Fern Farms is particularly concerning, being that it is 100% owned by the government of China, the Chinese Communist Party. Seriously, if you think that farmer shareholders are going to have ultimate control, then I think you are kidding yourself. It will end up with China 100% dictating terms and money and I'd put money on in the not too distant future, carcasses being shipped whole to China for processing there.

Tony, in defence of sheep farmers, with such low returns how can you stick to the sheep industry, which is also becoming very dependent on China.

And look at Brazil go after the Chinese beef market, a market I believe about to collapse

Brazil a country going to Hell in a hand basket

Thanks for the reply Tony.

I don't disagree that the current model has not preformed or that SFF were in need of capital. Where I do disagree is that the nuclear option of selling control, which I believe has long term consequences. While you are right that there are many other options for farmers at present the concern is that Shanghai Maling use SFFs newly acquired balance sheet to weaken the competition. There is many examples of the Chinese manipulating commodity markets and we would be naive in the extreme to believe it would not happen in this instance.

I view the Anzco example as a red herring as it was already foreign controlled and there remains at this point enough co operative capacity to protect farmers interests.

Although we agree the current model is not ideal the issue I have is the SFF have been speaking with folked tongue. Talking the company down to it shareholders while issuing glowing forward guidance to SM.

For anyone who is interested the following analysis from John Shrimpton that completely dismantles the SFF case.