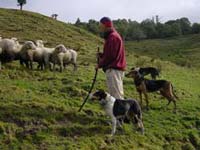 A further upside in lamb schedules this week, as demand remains firm on a slower kill ensuring more product is sold chilled, and less frozen and stored.

One company released an autumn contract that offered $5.60 to $6.00kg CWT for lambs in the April/ May period to give some guidance how the market for chilled product is at at present.

Rams are out in the early areas and ewes are in good condition at mating even in the dry areas.

With the arrival of autumn, demand for processing space has increased especially in the south, as managers focus more on next year’s crop, than last years.

Demand is strong for store lambs, with many are selling them live rather than to the works, and this helping keep schedules above the present market.

Mutton schedules are now at yearly highs, as the market realizes processing is well ahead of the norm after an early kill.

Last week’s double island auction saw prices align between the north and the south, on increased demand from China.

Analysts in Aussie have predicted that the merino wool market has little upside, but industry players are still optimistic that values will hold, citing the market is handling all the extra supply thrown at it.

BEEF
More lifts for all beef classes this week, as rain in NZ has slowed the kill and helped to lift competition for stock.

It appears a large numbers of calves were reared in both 2015 and 2016, and processors expect more dairy bulls are still to be harvested.

Another strong week for prime steers at the saleyards, as local trade price levels lifted again and values now have continued to stay steady for the last 9 months.

South Island calf sales are due to start this month and the recent rains will help create more demand for these popular trading animals.

North Island sales have been averaging 367c/kg lwt for weaner heifers in the 150-250kg range, and 400c/kg lwt for steers at similar weights.

These are about 30-40c/kg lwt ahead of last years early sales, and will be a good boost of returns to breeders and compensate somewhat from below average lamb and wool income.

DEER
Processors report more chilled volumes are being offered in key markets and this in a reduced supply climate has seen schedules rising again.

Weaning will be well advanced, and managers will now be feeding young animals with quality feed before the shorter days of winter slows growth rates.

The cooler nights will stimulate the stags into the roar, and surplus stags need plenty of room to minimize fighting and wallowing damage.

Feeder steers are selling at $1.18 a pound in California.

How does that compare AJ? Is that $US and at what sized weaners?