2017 has begun on a positive note for the country’s farmers, with rural confidence levels edging up, primarily driven by signs of renewed optimism among horticulture and beef and sheep producers.

The first quarterly Rabobank Rural Confidence Survey for the year – completed earlier this month – has shown net farmer confidence has risen to positive +27 per cent, up from +25 per cent recorded in the December 2016 survey.

Rabobank New Zealand general manager for Country Banking Hayley Moynihan said this was the lowest reading for a pessimistic outlook on the agricultural economy recorded among farmers since December 2013.

“Not surprisingly, the proportion of farmers with a pessimistic view on the outlook for the rural economy had been significantly higher over the past three years, reflecting the tough ride we’ve had with some commodity prices over that time, most notably dairy,” she said.

“While the proportion of farmers expecting improved agricultural conditions in the year ahead has eased slightly down from last survey, sentiment is at relatively high levels – and there are certainly fewer farmers who are taking a pessimistic view of the coming year.”

The latest survey also showed the number of farmers expecting the agricultural economy to remain stable over the next 12 months had climbed to 55 per cent of those surveyed, up from 42 per cent previously.

“There has been cause of optimism across these sectors recently,” she said. “Horticulture had an exceptional year of production and export growth in 2016, and a similar performance is expected in 2017.

“There has been positive news on the price front for sheepmeat, and lamb in particular, with prices holding steady even after the boats left our shores in February with Easter trade chilled product on board bound for export markets. Typically, we’d see a decline in prices after this all-important chilled Easter trade period. But this year, due to a mix of good offshore retail markets but largely tight supply with plenty of grass around, prices have actually lifted slightly.”

Dairy sector confidence, on the other hand, declined – from a net reading of 52 per cent in the previous survey to 41 per cent. Though dairy farmers still recorded the highest confidence levels of all farmers surveyed.

“After rallying in the middle of last year, optimism among dairy farmers has clearly tempered in this survey,” Ms Moynihan said. “Dairy commodity prices have softened since the previous survey – and in particular, the GDT Event auction where milk powder prices took a tumble was held during this survey period.

“New Zealand production has clawed back from the poor start to the season – thanks to improved weather conditions – and the extra production was reflected in weaker GDT Event prices. However, commodity prices are expected to bounce around at similar levels for much of the 2017/18 season, providing support for comparable farmgate prices next season – and underpinning confidence in the sector.”

Ms Moynihan said the most recent GDT result (held this week) – where the overall price index firmed by 1.7 per cent and whole milk power rose by 2.9 per cent – would be welcome news for dairy producers.

In terms of expectations for their own business performance, dairy farmers maintained an optimistic view. At a net positive reading of +54 per cent, dairy was the most optimistic sector when it came to expected business performance in the coming 12 months, although this was down from +67 per cent last survey.

Sheep and beef farmers had recorded the biggest turnaround in expectations for their businesses, with the net indicator for this measure in their sector moving back – albeit just – into positive territory with a +2 per cent net reading (up from -25 per cent).

“Similar to lamb, beef prices have benefited from tight supply, in addition to rising prices in New Zealand’s largest beef export market of the US. However, a forecast increase in US beef production is expected to put pressure on NZ beef prices in the second half of 2017.”

Horticulture producers were increasingly optimistic in their expectations about business performance with the net measure climbing from +19 per cent last survey to +44 per cent.

“Rising demand from Asian markets continues to be a key source of growth for horticulture exports – and this demand is being met by large harvests of gold kiwifruit coming online and a record crop expected from apple growers this year,” Ms Moynihan said.

Farmer investment intentions increased further this quarter, and are at the highest level since the end of 2014. The number of farmers expecting to invest more in their businesses in the next 12 months rose to 31 per cent (up from 28 per cent), while those intending to reduce investment declined to just seven per cent.

“On the back of strong business optimism, planting and re-planting of new orchards is taking place in principal horticulture sectors with the aim of feeding into new export markets,” she said.

Conducted since 2003, the Rabobank Rural Confidence Survey is administered by independent research agency TNS, interviewing a panel of approximately 450 farmers each quarter 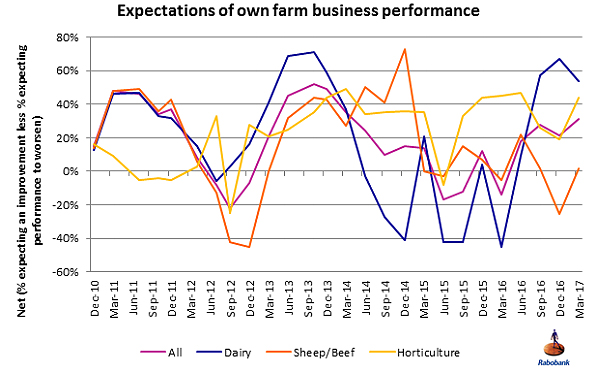 While in the real world the EU just had it sixth failed auction for SMP stock.

All SMP bids rejected for the sixth time in a row

Daily Price Update 23/03/2017: Poles join SMP slide
A decline in both Polish and UK skimmed milk powder (SMP) adds weight to an EU-wide slide towards intervention levels.
Polish SMP suffered the sharpest fall of all monitored Polish commodities this week – down -2.4% to at PLN7,910 (EUR1,853) per tonne.

...
While USA production does this
https://secure.attenbabler.com/wordpress/wp-content/uploads/2017/03/Mont...

That looks like an awful lot of milk Aj

MORE SMP INTERVENTION STOCK ON THE CARDS?
Published 21 March 17
Current levels of SMP intervention sit at around 350k tonnes, with only 40 tonnes being sold through the tender process (in mid-Dec).

The window is open for another 109k tonnes to enter the scheme if sellers are struggling to get a higher price. Wholesale prices have been reducing since the start of the year, heading towards the intervention level. Average prices at the start of the year were around €2,100/tonne and have fallen €230 to €1,870/tonne by 12 March. Prices now sit around €170 above the intervention price.

EU milk output on the rise, despite shrinking herd

Everyone is holding there breath waiting for someone else to cut production.

And this guy is King Canute
http://www.independent.ie/business/farming/dairy/hogan-stresses-that-he-...