With throughput down by more than a half in the past seven years, keeping the Ashburton plant open has ceased to be a viable option for Silver Fern Farms, explains Allan Barber

With throughput down by more than a half in the past seven years, keeping the Ashburton plant open has ceased to be a viable option for Silver Fern Farms, explains Allan Barber 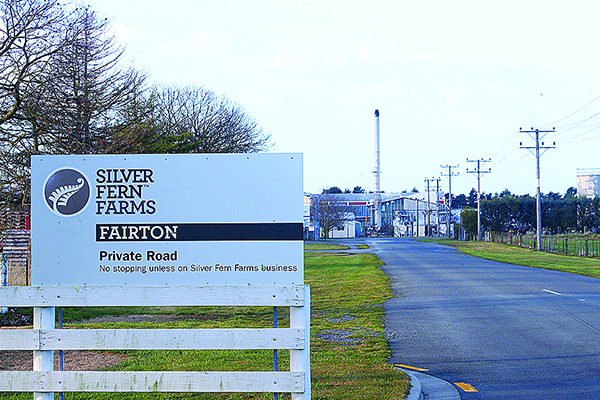 Silver Fern Farms decision to close its Fairton plant did not have much to do with Shanghai Maling’s investment, but was only a matter of time.

Even the workforce had apparently come to accept the inevitable after seeing lamb numbers through the plant decline sharply from more than 1 million in 2010 to less than 500,000 last season and 325,000 in the latest six months.

This demonstrated graphically the unsustainability of keeping the facility open when the company’s modernised multi species operation at Pareora is only an hour down the road. In its notice of proposal to close, subject to a two week consultation period, SFF cited declining sheep numbers in the surrounding catchment area as a result of land use change to more profitable forms of agriculture. However not surprisingly the company didn’t mention its substantial loss of market share at the same time, 14% share loss over a six year spell since 2010.

SFF has struggled with retaining its lamb market share across the country since its acquisition of Richmond in 2003, losing large slices of share in both Richmond’s traditional North Island power base and in SFF’s own back yard in the South Island. Investment in its cattle processing business has seen gains in its beef processing business which have compensated for the losses in lamb.

During the period between the seminal decision to conduct a hostile takeover of Richmond and the completion of the deal with Shanghai Maling last year, PPCS, subsequently renamed Silver Fern Farms in 2009, battled against a whole range of factors: supplier resentment, excess capacity, lack of capital to write off ageing facilities, years of little or no profitability, increasing debt and interest costs, and finally notice from the banks that they were running out of patience.

Hence SFF was between a rock and a hard place. The banks wanted out and alternative sources of capital weren’t immediately obvious, regardless of what dissident shareholders said. When the board was presented with the offer from Shanghai Maling to invest $261 million in acquiring 50% of the company’s operations, it must have seemed like manna from heaven. We all know the end result of the exercise which was finally consummated in January this year.

SFF is now in a position where it can make the right business decisions at the appropriate time without having to wait to find out if it has enough capital to carry them out. In spite of the screams from opposition political parties about the damaging influence of the Chinese shareholding, this would have had nothing to do with the closure decision apart from strengthening the balance sheet to ensure it can happen.

Although restructuring and rationalisation in such a dynamic industry environment will never cease, SFF has finally reached the stage in its evolution to be able to operate with a plant and capacity configuration appropriate to today’s world. With the other good work it is doing with FarmIQ on farm systems, Eating Quality Reserve Beef, genetic improvements, its value added branded products and participation in the Red Meat Profit Partnership, the company can now get on with building its positive vision of the future for its suppliers and shareholders.

They tried , and whats happened is just unfortunate, in a world where change is ever evolving and fierce competition is ever present

One of the best things we can do for our children is to instill a sense of understanding that changes will occur that will impact on them their entire lives .

My very first job ( part time as a teen ) no longer exists , its been overtaken by technology

Apart from a work ethic , a sense of fairness , thrift and honesty , we need to impart an understanding of how to accept change and adapt to survive .

And that while change is inevitable we live in a finite system where population and resources matter. Change isn't always for the good.

No fear of job exports! No Fear!!

We aren't about to build a plant in Uruguay or China; they want this product 100% made in NZ. This is a tremendous outcome of this investment in terms of economic development and employment falling into [the NZ] market.

"We're excited that retail-ready [product] packaged in this market will be a significant growth area for us."

Hamilton says Shanghai Maling can bring some real value to the company on several fronts, including access to an inland customer clearance business, which allows them to bypass the port clearance system; and the company knows how to handle chilled product and understands the supply chain.

"Between themselves and Bright they have over 6000 supermarkets. So in trying to get product into a complex part of the end market, there is opportunity to leverage those supermarkets to
put us in a unique position."

Weren't these 6,000 supermarkets going to raise the schedule and see sheep flooding back to the central South Island and plant sites invigorated, invested and given breth of new life?

Good question indeed! It is also obvious that the sheep meat processors had given up on the upper half of the South Island quite some time ago. For instance count the chains now between Neison & TImaru, then count the chains that were once provided by Picton, NCF, Canterbury,Islington,Sockburn Fairton. Not much economical choice these days for the farmers in those areas which were once a huge & vital producer for the industry.

if it was processed in China could it be sold as NZ meat? If so, how can it be regulated? Chinese honey on the news tonight being sold as product of NZ.

Not if it was dead on arrival.
We could fly the cattle there economy class.
Brings new meaning to the term "cattleclass"

Yes your comment re an inability to upgrade, or even properly maintain, a hotchpotch of ancient plants rings true, however a great deal of finance was nevertheless expended on branding, advertising and top floor executive and creating an "image."That's about as much use as setting out in an old freighter with a new paint job, a great wardroom, highly paid officers, a lovely flag but busted boilers. To quote old Longtack " you are only worth what you produce."