Our meat industry sells its products in most export markets, but those prepared to pay what our farmers think they need is still a relatively small set, says Allan Barber

Our meat industry sells its products in most export markets, but those prepared to pay what our farmers think they need is still a relatively small set, says Allan Barber 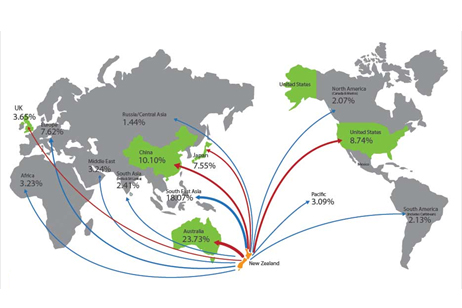 New Zealand’s meat exporters come in for a lot of criticism, either for selling too cheaply or for not adding value, and certainly because they can’t (or don’t) pay farmers enough for their livestock. This final criticism is presumably a direct result of the first two – the prosecution’s case argues if they sold product at a higher price or added more value, they would automatically be able to pay more for livestock.

Logic says the critics are correct, but they fail to take into account such annoying complications as market demand, tariffs and market access, exchange rates, seasonality, grass growth and the fact lamb in particular is too expensive to be easily converted into affordable ready meals. New Zealand meat exporters have successfully built relationships with overseas supermarket groups, high quality food distributors and top restaurants, as well as food manufacturers and fast food chains.

Lastly, and most importantly, they generally manage to sell everything they process, although in some years they may be left with too much inventory which has to be converted into cash, probably at a discounted price. Over the last few years there has been a lot of debate about ownership of the meat companies with some farmers arguing passionately in favour of 100% farmer ownership as a panacea for the perceived ills of the industry.

This was always a dubious proposition and ultimately not enough farmers shared their passion which means the major part of the industry now comprises most forms of shareholding except for share market listing: Alliance is the only true farmer owned cooperative, Silver Fern Farms is half owned by its farmer suppliers and a large Chinese food business, ANZCO is majority Japanese owned and forms part of a major food company, while AFFCO is wholly owned by a New Zealand food processor. Universal Beef has Taiwanese owners, Greenlea and Auckland Meat Processors are privately held New Zealand companies, and Blue Sky Meats is still locally owned after the Chinese offer was withdrawn.

Even the dairy industry, although ideally suited to the cooperative model because of the need for guaranteed daily milk collection, has other forms of ownership which a growing minority of dairy farmers appears willing to support. There are no frills options such as Open Country Dairy which does not require suppliers to hold shares in proportion to seasonal supply, boutique value added processors like Tatua and the Synlait model which has the China infant formula market as its main focus.

The important feature of meat industry ownership is the freedom of choice and flexibility open to suppliers, often a cause of frustration to the exporters. Against this industry background it is worth noting the fact New Zealand sheep meat is currently exported to 99 countries and beef to 80 countries. In the most recent six month period over half our lamb exports went to China (32%) and the UK (19%), half the mutton went to China and 66% of beef was exported to the USA and China. In fact China took 29% of total red meat exports and the United States 25% during the period in question.

But a large range of other markets still made up a sizeable volume of sales without which the industry would have drastically underachieved and these figures don’t cover the export of wool and co-products which have their own specific destinations. A quick scan of export for New Zealand lamb shows the EU, including the UK, takes most product with Germany, Belgium and the Netherlands featuring in the five highest paying markets along with Switzerland and the USA.

One thing nobody can fault our meat exporters on is the breadth of their sales programme which ensures New Zealand red meat is available in most countries around the world.

True the supply to market is spread is much further & wider these days, but more significantly, a heck of a lot thinner.

Great to see you post some good news for once Andrewj !!