Unusual confluence of an upbeat rural outlook across all sectors finds farmers positive about both their own prospects and those of their industry. Investment intentions rise

Unusual confluence of an upbeat rural outlook across all sectors finds farmers positive about both their own prospects and those of their industry. Investment intentions rise
27th Jun 17, 8:29am
by Guest 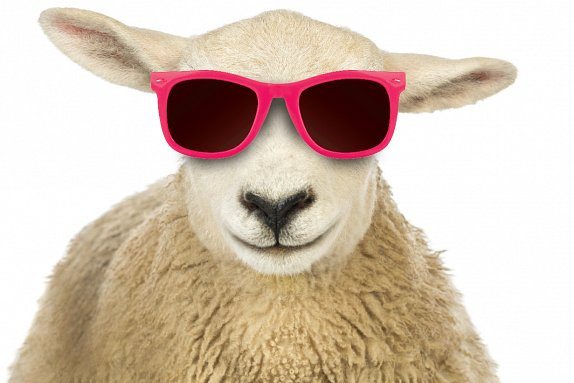 Confidence in the New Zealand agricultural sector has lifted dramatically over the past quarter and is now at the highest level recorded in the history of Rabobank’s Rural Confidence Survey dating back to early 2003.

The second quarterly survey for the year – completed earlier this month – has shown net farmer confidence has risen to +54 per cent, up from +27 per cent recorded in the March 2017 survey.

The survey found the number of New Zealand farmers expecting the agricultural economy to improve in the year ahead had jumped to 57 per cent (compared with 34 per cent in the previous quarter) with those expecting agricultural economic conditions to worsen dropping to three per cent of survey respondents (from seven per cent).

Rabobank New Zealand General Manager for Country Banking Hayley Moynihan said confidence in the outlook for the agricultural economy had risen amongst farmers from all sectors since the last survey.

“Confidence in the agricultural economy amongst dairy farmers and horticulturalist was strong last quarter, and we’ve seen it climb even higher in this survey. However, the most notable jump in confidence was recorded amongst sheep and beef farmers, with sentiment amongst this group lifting from a net reading of +nine per cent last quarter to +53 per cent in this survey,” she said.

Among survey participants expecting the agricultural economy to improve, the vast majority (71 per cent) cited rising commodity prices as a key reason for holding this view. This was particularly the case amongst dairy farmers (at 77 per cent) and sheep and beef producers (at 66 per cent).

“Buoyancy in the pastoral sectors is underpinned by strengthened farmgate returns across the industries,” Ms Moynihan said. “Sheep and beef farmgate prices continue to hold steady at strong levels for beef and higher than initially expected for lamb, and lower supply from New Zealand as well as other key export regions will underpin good returns over the coming months.

“Dairy commodity prices continue to strengthen thanks to steady demand and lower supply and this has been recently reflected in strong opening price signals for the new 2017/18 season by many dairy processors.”

The survey also found farmers’ expectations for their own farm business performance were up on last survey.

More than half of farmers surveyed were anticipating the performance of their own farm business to improve across the next 12 months contributing to a net confidence reading of +47 per cent, the highest reading since late 2013.

“It’s very unusual to have farmers from all of New Zealand’s key agricultural sectors so confident about the outlook for their own business’s performance and this bodes well not just for the rural economy but for New Zealand’s economy,” Ms Moynihan said.

Ms Moynihan said that given the improvement in farmer expectations for their own businesses, it was no surprise to see investment intentions increase this survey.

Ms Moynihan said that the stronger investment intentions amongst farmers would result in increased operating expenses in the coming year.

“The survey found that 40 per cent of farmers expected to spend more on animal feed, fertiliser or machinery in the next year in comparison to the previous year, while only eight per cent were expecting to spend less.”

“Dairy farmers, in particular, will be looking to increase farm expenditure given the belt tightening that has been required over recent seasons,” Ms Moynihan said.

“With positive margins likely for dairy producers this season, farmers are now able to consider reinvesting in their businesses for items put on the backburner over the last three years, such as technology, shed improvements and new equipment.” 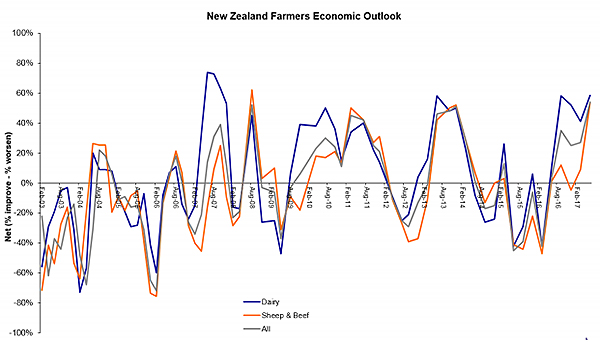 It's hard to make predictions, especially about the future.

The future ain't what it used to be.

I started reading this with the question WTF on my mind. But I now see it's all about the start base. Reality for most I talk to is that last season was one of the hardest mentally and physical that most have been through. Spending has been down for a while. So no doubts most do think things will improve, no surprises there.

Southland has had a good year, though the north island, or at least parts of it, I understand, have had it tougher. redcows, are farmers you talk to concerned about the Fonterra 3kg limit for PKE? Though it is only advisory this season it will be penalised if breached from 2018, so there will be farmers who may need to consider what options they have. I understand that PKE use has fallen anyway in some areas.

Farmers are in the corporate world now.
All promises of increasing asset values but poor returns.
Get used to it, occasionally they will offer you a share buyback.