Allan Barber reports that AFFCO is learning that Chinese customers are confused by western sheep meat cuts so is shipping chilled whole carcases, and getting a premium

Rural News
Allan Barber reports that AFFCO is learning that Chinese customers are confused by western sheep meat cuts so is shipping chilled whole carcases, and getting a premium 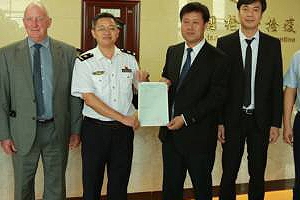 The arrival was marked by an official reception at Zhengzhou attended by the NZ Trade Commissioner Liam Corkery, MPI representatives Dave Samuels and Steve Sutton, and a Kangyuan executive.

According to Lewis the speed of customs clearance for the consignment was a record for meat shipments, taking no more than three hours for the whole process.

The distributor, Kangyuan Food Company, has cool storage and frozen storage facilities and imports more than 10,000 tonnes of meat annually from New Zealand, Australia and South America to supplement its own domestic processing capacity of 600,000 sheep and 100,000 cattle. Kangyuan is also the largest distributor of Halal product in China.

AFFCO has several containers of beef and mutton both on the water and in preparation for shipment to China, as a follow up to the first container. The company has been working closely with its Chinese partner distributors with the right cool chain storage and distribution facilities to make sure it was ready to take advantage of the chilled trial after its announcement in March by Minister for Primary Industries Nathan Guy. Part of the preparation consisted of visits by Chinese butchers to determine the best way to cut the carcase to extract the maximum value from the market.

AFFCO’s China Sales Manager Clint Bailey said one of the outcomes from these visits was the recognition more value could be gained from mutton by shipping carcases for cutting in China. Bailey said, although this might be counterintuitive, “What we’ve found is that for sheep meat in particular chilled Western cuts are not the way to go. It’s got to be cut Chinese style to get the most from the carcase.”

To resolve this AFFCO is shipping chilled mutton carcases whole, which will be cut to specification at their destination enabling customers to buy on a cut-to-order basis to suit their specific requirements. Whole carcases are worth almost twice as much to the Chinese as traditional Western cuts, which are often underutilised in their market. According to Bailey, value needs to be assessed through the eyes of the customer and their willingness to pay for it.

AFFCO has developed a network of customers across China which means they can carefully select the appropriate channel to capture the highest value for chilled New Zealand meat into that market. The price obtained for mutton in particular is now much closer to lamb as a result of the ability to meet customer requirements with the appropriate form of chilled product. From now on about 20% of frozen product will be shipped in chilled form which reduces the volume of frozen inventory in the market and as a result it will be possible to maintain a firmer price structure across the board.

How much meat can China buy, Uruguay has sent live shipments of beef although mostly for breeding, Brazil has many plants cleared to export to China and 80 more due to be cleared this month, India is back exporting low value buffalo. USA beef exports to Asia are way up, double digits over last year.

Australia is looking to export %10 of it's beef kill to China live, feedlots in Aussie are at record stocking

Trying to guess markets today is harder than weather forecasting but looking around Europe and seeing the affect of Russian wheat being felt in markets. Thats the 100+ farmers in Russia with over 100,000 hectares planted, the push by Russia to expand production of Chicken/Pork/ beef and Dairy with low interest loans and very low cost structures, I'm expecting there to be plenty of food for the foreseeable future.

Same as it ever was....
Ripping costs out and slope stabilisation!

I spent some time working in the meat industry many years ago and was impressed by the then marketing departments who worked hard with the customers to match the customer needs (cuts) with the cuttng room processes here in NZ. Now it seems we've taken a leaf out of the timber industry (pun intended) and are now shipping whole carcases because we don't know how to work out what cuts the customer wants. We could go on an older nostalgia trip and wrap it in mutton cloth and freeze it.
There goes the added value and added return to the NZ worker and farmer.