The Weekly Dairy Report: Large areas of the country are very dry, as auction prices recognise production may fall unless rain comes soon

The Weekly Dairy Report: Large areas of the country are very dry, as auction prices recognise production may fall unless rain comes soon 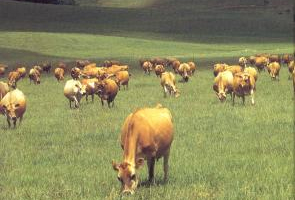 More very hot days and little rain raises concerns that a long and severe drought is building, and all farmers are being urged to plan for feed shortages this summer.

Most of the country is sitting 30-50mm drier than normal, and soil conditions in many areas are at moisture levels normally seen in February.

Pasture growth rates are falling even with irrigation, as the dominant ryegrass pastures fail to perform in very hot conditions.

Many are recording lower yields of conserved silage, and combined with summer and winter crops that were later sown, the ingredients for a feed shortage look likely.

Advisors suggest Christmas  break rosters should all be in place now and also advise to check stock water schemes for leaks before summer proper starts.

Fonterra announced it’s pre Christmas update on the forecast, and as many predicted it fell to $6.40/kg/ms, in response to recent dairy commodity price drops.

Combined with the dividend cut, this prediction has taken millions out of the dairy economy, and the dry could produce the double whammy of a price and production fall.

For a few the dairy debt is still far to high, and leaves them business vulnerable in these volatile times, especially as the banks appear less sympathetic to help this group as they were in the past.

Last weeks auction result was positive for the first time in last five events, as the lowering volumes and dry predictions shortened the supply forecasts and increased demand.

The dairy farm open day was well supported, in the sectors endeavour’s to educate urban New Zealand on how they are solving the environmental issues of intensive farming.

The mycobovis outbreak got worse overnight as more farms in Southland, Ashburton, and the Hawkes Bay have tested positive to this disease.

Reports suggest all these animals have come from the original source farms in South Canterbury, but all farmers will be concerned as to whether the NAIT movement of stock scheme has worked, and this outbreak can be contained.

Going to be very interesting next summer with limits on the go to buffer feed, PKE being introduced

Supplementary feed is in very short supply, we have got 30 tonnes of grass silage [normally 60 tonnes] which we usually feed to the herd in early autumn, so we are delaying feeding that as long as we can." He said palm kernel was the only other option and that was increasing in price and getting hard to get from most suppliers.

Fonterra will penalise farmers from June 2018 for excessive use of palm kernel, which changes the fatty acid composition of milk. Federated Farmers dairy group chairman Andrew Hoggard said farmers should have time to adjust. The most obvious scenario that could cause a problem was summer drought. If that happens it might start to red line, so we might need more grass silage on hand. Some farmers might have to drop a few cows to make more silage

"European milk production was strong again in October. Austria, Greece, Spain, and Sweden have
not yet reported October milk collections. Assuming that trends were similar to September in
those nations, European milk collections in October were 5% greater than the prior year and up
1.1% from the record-breaking volumes of October 2015. The biggest players, Germany and
France, both managed to increase milk collections by 4.9% from a year ago. Indeed, each of the top
ten European dairy nations reported sizeable yearover-year growth. In sixth-ranked Italy, milk
output was up 10.1% from 2016 and 9.8% from two years ago. Hopes that post-quota growth in
Northern Europe would be partially offset by declines in Southern Europe have proven illusory, to the detriment of milk prices around the globe."