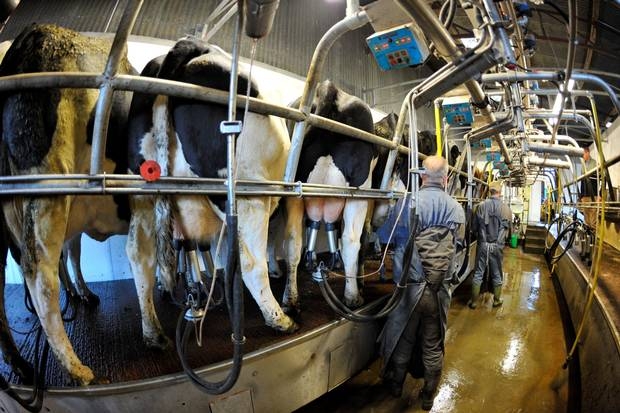 I sometimes think I’m operating in a parallel universe, and looking at other commentators view of the latest GDT results is one of those moments.

On the surface, yes, a +0.8% lift should be seen as a positive result but when the Whole Milk Powder component is down by -1.3% and volumes are down by -18% to me warning bells should be sounding for New Zealand farmers.

WMP is the largest percentage of what Fonterra farmers sell overseas and presumably the “back to basics” strategy being adopted will mean more reliance is placed on WMP. Looking forward at the GDT results the WMP contracts steadily decline from June to September from -0.8% down to -5.5%. Not a great outlook.

One poor sale does not make a winter however, given the interest coming from other international producers i.e. DFA and the European EEX there does appear to be a rapidly lifting supply without an obvious lift in demand.

On the other side of the coin and just to be perverse and perhaps show that the commentators do have it right, at least in the shorter term - the USDA Oceania international Dairy Prices which are monitored by interest.co.nz had a lift in the last period of US$125 per tonne whereas they recorded a drop in SMP prices. Going back to WMP, USDA have shown consistent (US$) lifts since December.

Hopefully Jacinda Adern’s rapid in-out trip to China to meet with the Chinese President and Premier has pacified any anti-New Zealand sentiment there. Given her record to date with being able to build relationships it would have to be seen as achieving a positive outcome.

While the Huawei 5G issue has no doubt created potential problems, and is likely to continue to do so until Spark make a final decision, Adern’s face to face conversations and the emphasis on “trust” espoused by both Xi Jinping and Adern should go some way to keeping a lid on any high-handed responses from China if the decision goes against Huawei. At the extreme end remember what happened when Japan took exception to China’s claim to Island’s in the East China sea in 2012. Protesters wrecked Japanese goods and property worth over US$126 mln and cars sales plummeted by US$250 mln and so forth. So it doesn’t pay to poke the tiger too hard.

On the positive side Chinese consumers seem quick to move on with Sino-Japanese trade relations now at record levels. As part of the PM‘s visit she witnessed several memorandums between New Zealand and China being signed one of which directly concerned agriculture, “an agreement for a strategic plan on promoting agricultural co-operation”. Given the amount of Chinese ownership of primary production in New Zealand the horse has already bolted on this one.

A current success story with New Zealand dairy products is the Theland airfreighted fresh milk coming from New Zealand selling up to 40,000 litres a week for up to $15 per litre and plans to increase it to 100,000 litres. It should be noted while the companies are based in New Zealand they are Chinese owned, remember we are “back to basics”. Nestle’ on the over hand are expanding their research and development into China and are “bullish” about future prospects there. Perhaps that was the bit Fonterra missed.

The destruction of the Waiho river bridge in the recent floods shows vulnerability of outlying dairy farmers in Westland catchment. This re-emphasises the future potential risks ‘distant’ milk suppliers to the non-co-op future Westland face. Apparently, Fonterra were asked if they were interested in buying into Westland but it appears to have been a step to far at a time when Fonterra are having their own battles.

WMP is the 'go to' for Fonterra. We have the plant and some competence at making a relatively simple product. WMP will remain in demand by Asia and Africa for the near term and management bonuses and thinking are based on the short/near term. Fonterra have a poor history in managing any business outside NZ. There are some small local wins with value add such as the mozzarella cheese plant but too small to have any effect on farmer payout. With 'peak milk' having been and gone some of that big stainless steel will be looking marginal at less than maximum through put.
How is Theland sending liquid milk to China a win for New Zealand? Chinese owned and financed farms supplying a Chinese owned dairy processor with minimal processing. Where's the win for NZ? Oh and they can buy all their farm inputs from majority owned PGG Wrightson and process their surplus stock through Silver Fern Farms.
This is not a dig at Chinese ownership - a lot of our agriculture infrastructure and processing industry is now foreign owned. And if not, such as our pine tree forests, - just send the whole log overseas for processing.

"Given the amount of Chinese ownership of primary production in New Zealand the horse has already bolted on this one."
So what do we do? Give up and let the rest go? Looks like that is our current position?

Of course. Our economists and politicians want us to celebrate on news of Chinese investments in NZ. A closer look reveals these are just brownfield investments where Chinese importers are vertically integrating their supply chain and no new jobs are being created.

Oh, NOW they will admit it, when it's too damned late.

"Too dammed late"
As I said can we afford this defeatist give up attitude? If we are not prepared to fight and struggle for our future we will get what we deserve.

Wholly agree. I reckon the only people who reckon we should take this lying down are the likes of Damien Grant and a certain opposition MP who personally benefit from it.

Just how much primary production do the chinese own?

Returning its focus to wmp is a tacit admission of utter failure, especially with Nestle expanding their value added operations... maybe Fonterra should copy other chinese business interests in this country and get into bottled water...

Well you'd expect it to be an opportunity to carve out a lot of overhead from within the organisation. Surely they've got the whole WMP game pretty well sussed by now? What else are all the bods doing there?