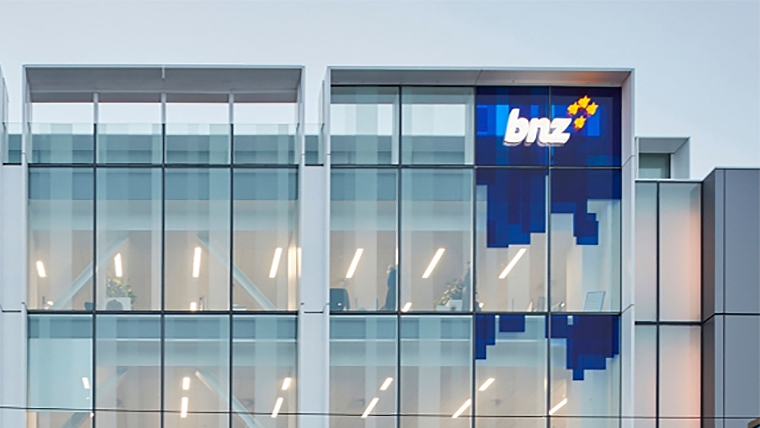 BNZ's annual profit surged 74% to a record high with income and lending growing and expenses falling.

Operating expenses fell $98 million, or 9%, to $1.060 billion. BNZ CFO Peter MacGillivray says the big reduction in expenses is largely due to a $151 million charge last year, when the bank accelerated the depreciation of internally generated software, not being repeated.

A credit impairment write-back of $37 million versus a charge of $300 million last year also helped BNZ. As did a big rise in gains less losses on financial instruments such as hedging to $277 million from $88 million.

BNZ's the last of New Zealand's big four Australian owned banks to report annual financial results. Combined the four made $5.493 billion in net profit after tax. That's $365 million, or 7%, more than they made in their previous strongest year of 2018. Banks are currently restricted to paying out no more than 50% of their earnings as dividends to their shareholders. MacGillivray says BNZ will be paying a dividend, probably in mid-December, but the size of it is yet to be determined.

Deposits and other borrowings increased 9% to $78.1 billion. According to NAB, BNZ had $41 billion of deposits on interest rates between 0% and 0.25% at September 30.

In a statement BNZ's new CEO Dan Huggins says the bank is strong, stable and well-capitalised to support a business-led economic recovery.

“Business is in our DNA. We’re being flexible and innovative, and backing customers to find opportunities," Huggins says.

“We were the leading lender under the Government backed Business Finance Guarantee Scheme and our own Good to Grow scheme has supported businesses with nearly $300 million to help drive sustainability, productivity, growth and expansion plans.”

The image below comes from NAB. Note, GLA stands for gross loans and advances. HL is home lending and BL is business lending. 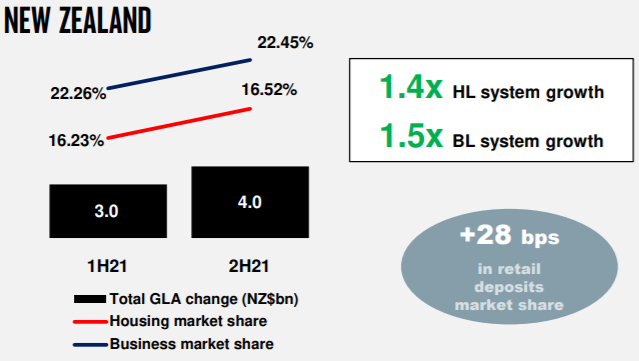 how glad are we (the shareholders) that the government sold this bank,

Great, they can now increase the interest rate on their highest savings account the Rapid Saver from 0.15% ho ho ho

There can't be much left on the bottom of the barrel to scrape off, can there?

Afterpay of school fees to target struggling parents. Edstart, which is backled by the NAB....says its platform helps smooth school costs over the year, and lets parents manage the irregular financing of activities such as music camps and school swaps by putting customers on repayment plans while it makes payments to the school.

Afterpay is working on plans to add Westpac mortgages and other loans to its product range next year. ( similaly, to help struggling homeowers smooth their costs over the years?)

An impressive result indeed. A 9% decrease in operating expenses is also noticeable.

Staff working from home must have cut down the establishment expenses a lot. Branch closures too must have helped.

Yes covid has been great for banks justifying branch closures and an increase in the migration to internet and phone banking.

Yes. Though even before covid banks have been on a constant drive towards digital products / processes. Both internal and external interactions. Digital processes and products are more efficient.

Ive often thought that one of the reasons for house prices increasing, is that banking tech (flow/Intergration and quality of information) keeps getting smarter and more efficient, which allows for more money to be lent within risk tolerance.

it's not hard to tell who really calls the shots in this country.

Stonking is an interesting word:

F**k me I'm hungover. I was stonking last night.

This is the context I was thinking of. Bold added by me;

used to emphasize something impressive, exciting, or very large.

Bravo Well Done.  Special thanks to the Reserve bank for helping BNZ significantly grown the loan book and helping impairments reverse with QE.

How encouraging for NZ's wellbeing.

I love how they try and talk about being ready to lend to businesses while they are just expanding their home loan book.

it’s embarrassing we are repeating all the mistakes of the GFC with too big to fail financial institutions milking massive profits off a housing bubble, knowing full well the government and RBNZ will provide a taxpayer funded backstop when the shit hits the fan

All the while repatriating 70% of the profit to Australia.

Technically they export the profit to shareholders?

I'd wager most people here own shares in these banks either directly or via funds of some sort.

Still completely obscene of course. I just can't decide whether I'm outraged at the risk we are building, or happy that my funds keep paying dividends?

No sub-prime mortgages here though.

by Nzdan | 14th Nov 19, 7:05am
Banks probably want interest rates to rise after a prolonged period of increasing loan book size. A bait and switch of sorts. Get everyone juiced up on low lending rates and then tighten up the vice on the balls.

you got it, all the banks savings accounts are less than the OCR.

Thanks RBNZ. Your overreaction has created this profit leaving NZ from all four Aussie banks.

The real tragedy here is

Given inflation running at 4.9% that is $2 Billion of buying power wiped out for depositors.  When we were young we told to save.  Now saving is treated with distain.

This is in effect, proof of the Government's failure to adequately regulate the market. This is from housing to how the 'money printing' they did in response to the COVID impacts was used.

The banks could and indeed should be partners in the country building resilience, but instead they are drivers in the economy becoming seriously imbalanced, and at risk of collapse. More proof as to why the regulations governing them need to be much more robust.